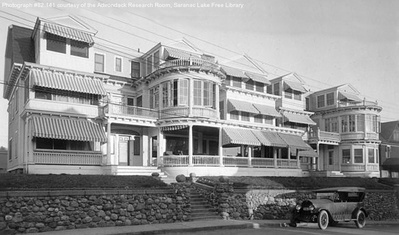 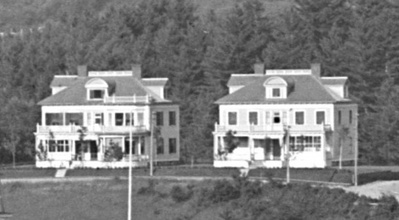 The Alta Vista started as two separate but very similar houses. [c.1902] For a larger view of this photograph, see Helen Hill. 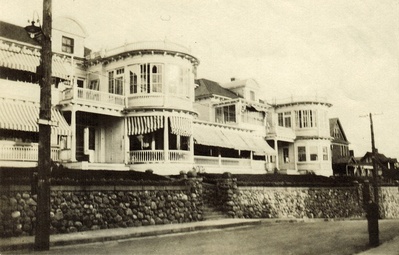 Alta Vista Lodge. The reverse identifies it as the "Flynn Cottages." (undated) Courtesy of Kay Best Address: Burned in 1959

The Alta Vista started as two separate, nearly identical houses built before 1902, that were combined into a single building about 1924. 1 It was owned by H. Stanley Parker and then Camilo Panerai. It closed in the late 1950s, and burned to the ground, November 2, 1960. 2

According to the 1916 TB Directory, the Jordan Cottage, run by Mrs. William L. Jordan, had room for 11 patients, had one cure porch and charged $18-30 per week.

Camilo Panerai is best remembered as the owner and operator of the exclusive Alta Vista cure cottage on Franklin Avenue. Mr. Panerai was born August 9, 1910 in Havana, Cuba, the son of Camilo and Elvira Panerai. On September 22, 1933, Camilo arrived in Saranac Lake seeking a cure for tuberculosis. He was 23 years old, and a student at the Havana University School of Architectural Engineering. In 1933, he stayed for a brief time at the Gonzalez cure cottage at 144 Main Street. Within a month, the Gonzalez moved to 14 Park Place, and it is unclear how long or where Camilo continued his cure. He returned to Havana to finish his studies and work at the Purdy and Henderson architectural firm in Havana, from 1934 to 1941.

The couple lived out their years in Saranac Lake, both living into their eighties. Helen died in 1991 at age 81. Camilo died at age 83 in 1994. At the time of his death he was living at 117 Forest Hill Avenue. Mr. Panerai was a prominent businessman in the community, but he did not actively cultivate connections to visiting Latin Americans, and he did not cater to Latin Americans in particular. Our survey of Latin American patients shows eight having stayed at the Alta Vista, two before his ownership in 1944. The six Latino patients that stayed at the Alta Vista in the forties and early fifties were from all over Latin America — Venezuela, El Salvador and Cuba, and one four and a half year old boy from Colombia.

One resident was Gerald Haxton, the secretary and companion of W. Somerset Maugham. On July 6, 1944, he was examined by Dr. J. Woods Price. He was 52 years old and was staying at 48 Franklin Avenue; his former address was the Ritz-Carlton Hotel in New York City. He died the same year.

"During his stay in Saranac Lake many years ago he owned the residential property on Franklin avenue now known as Alta Vista lodge and maintained a most elaborate private ménage. Distinguished personages of the financial and political worlds were frequent visitors at the McGibbon residence."

Five of them regard themselves as "perfectly well," and are simply staying in Saranac Lake because they like it. The other 14 are honest-injun patients.

They live at Altavista Lodge, 48 Franklin Avenue. They have business, professional and social interests in widely scattered portions of the globe.

Bankers and brokers seem to be in the predominance. There is, for example, Robert Rumpf, president of the National City Bank in Paris. Mr. Rumpf came to this country on a special mission for his government last July. He was ill a few days, got his diagnosis of tuberculosis a few days later, and has been at Altavista since.

There are Mr. and Mrs. A. J. Burns. Mrs. Burns is the patient, but Mr. Burns, who is senior vice-president of the National City Bank in New York, likes it here. The result is they've both been staying at Altavista since August.

There's Mrs. Elan Olney. She's been here since last September. Her husband, who is employed by the the National City Bank in Manila, Philippine Islands, is joining her here in May and will stay the summer.

Mrs. Albert H. Gordon has been here since last June, Her husband is a member of the firm of Lee, Peabody & Co., brokers.

William K. Ludlam first came to Saranac Lake 12 years ago. He regained his health, and went back to his job, (he's a member of the firm of Hornblower and Weeks, brokers). Three years later he retired. He returned to Saranac Lake to make his home simply because he likes it here.

But although bankers and broker may be in the majority, there is many another field represented.

Harold Humpstone, for example, is Standard Oil's representative in Santiago, Chile. Mr. Humpstone has lived here before, and returned this winter simply because he thinks this is a good place to rest, and that the change of climate is beneficial.

Norman J. Teitjens is a lawyer with the U.S. Treasury Department in Washington, D.C. He's a Brown University man and a graduate of Harvard Law School. He's been here for about six months.

Mrs. Frederick Klist is secretary to the president of the L. C. Smith typewriter manufacturers of Syracuse. Her boss is devoted to her, and he and Mrs. Smith visit her here frequently. With Mr. Klist, they were her guests the week-end of the 19th.

Mrs. Richard B. Chase comes from Fall River, Mass. Her husband is the owner of a textile factory there. He's been coming up to see her every two or three weeks since she arrived last July.

Robert VanHorn of Baltimore, Md., who has been here all winter, and on several previous occasions, is the only son of the general manager and vice-president of the Baltimore and Ohio Railroad,

Camillo Panerai is a professor of architecture at the University of Havana. His curing has been so successful that he will be able to return to his duties in the fall.

Miss Carmen Aranguren came to Saranac Lake all the way from Caracas, Venezuela. She was taking a course at the Katherine Gibbs Secretarial School in New York City when she suffered her breakdown. Her aunt, Mrs. Harold Fallar, also of Caracas, is arriving in June to spend the summer with her.

Mrs. Amy C. Irwin came here three years ago to spend two weeks. She stayed because she likes it. Saranac Lake is now her home. She studies French at the Guild, is learning ceramics there too, and is learning to paint at the Saranac Lake Art League.

Mrs. Edward J. Finn, who has been here for a number of years, also does ceramics and studies with the Art League. Nothing keeps her here except the fact that she's keen about Saranac Lake.

Others at Altavista are John J. Brand, a caterer, formerly connected with a large New York hotel; Miss Betty Goldberg of Hartford, Conn., who owns a chain of dress shops in New England; James Waide Scott, who is the owner of a screen advertising business in Binghampton, N.Y., and Elliott J. Brenner, a young man whose father is the New Jersey distributor for Esso gasoline.

Mrs. Finn, Mrs. Irwin, Mr. Humpstone, Mr. Ludlam and Mr. Burns make up the quintette which regards itself as perfectly well. The others have hopes of being in the same category soon. #

Dr. Leonard L. Feldman, physician and surgeon, and Leonard S. Wissow, attorney, both of Philadelphia, are the new owners of Alta Vista Lodge at 48 Franklin Avenue. Final purchase arrangements were made yesterday with Camilo Panerai, former owner. Mr. Panerai will continue on as managing director.

The new owners said they have great faith in the area because they feel it is better suited for recreational developments than any other part of the United States.

Dr. Feldman and Mr. Wissow will bring their families here for a vacation this summer and hope some day to live permanently in Saranac Lake. The Feldmans have three children and the Wissows have two.

The new owners say they have already worked out package deals for bus tours from Saranac Lake surrounding points of interest such as the St. Lawrence Seaway, Montreal and Saratoga. They also said they are planning external renovations at the Alta Vista.

The fine cuisine and service which Mr. and Mrs. Panerai have been noted for will continue, they said. Mr. Panerai owned the 35-room Alta Vista for 16 years, purchasing it from Henry Stanley Parker.

Mr. Wissow has been a member of the bar in Pennsylvania for ten years and Dr. Feldman is director of the Diamond Street Hospital in Philadelphia and has practiced medicine for 10 years. 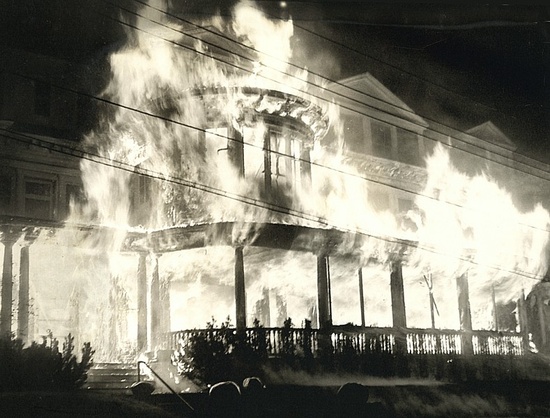 Flames of epic proportion signaled the end of one of Saranac Lake's resort hotel buildings this morning as firemen of three villages battled futilely to bring the raging fire under control.

The three-story Alta Vista Lodge at 48 Franklin Avenue was demolished in a matter of two hours. Hampered by a lack of water, Saranac Lake firemen on the scene at 5:20 a.m. were forced to stand by in near blast-furnace heat with a few hoses hardly able to reach the front verandah section which seemed to be the only point where the fire was evident on arrival.

The fire was discovered at 5:12 by "Bud" Smith who resides at the Schreiner Cottage on the opposite side of the street. Smith reported that he first observed flames near the ceiling light fixture on the enclosed porch of the vacant building.

A mutual aid emergency call was sent to other villages and both Lake Placid and Bloomingdale departments responded. The flames were well contained within the building until the roof section erupted in a plume of fire visible for miles around.

The disintegrating unoccupied building sent up a shower of sparks which endangered houses over a wide area and the Hays building at 46 Franklin Avenue was badly scorched on the end section. Firemen poured water on the Hayes residence continually as occupants were forced to flee.

The heat was so intense that the crowds were driven back 100 yards or more to escape its searing intensity. At one point telephone poles near the building caught fire and flames danced in a circular path towards the pole top.

With the arrival of help from other departments and the resurgence of direct water pressure from Lake Flower the firemen were able to move in closer and for awhile it seemed that they might win the battle to save some of the huge, sprawling structure.

The vacant building opposite the Alta Vista caught fire briefly at a cornice but the spurt of flame was quelled immediately.

At one point firemen were endangered when the front portico of the building began to topple, but SLFD Chief Francis Gladd withdrew his men and deployed them to more strategic areas of operation.

Sheds and garages at the rear of the Lodge also were partially destroyed and the helps quarters charred through.

Standing at 8 o'clock this morning was a portion of the end section still in flames, the elevator shaft, chimney and a heap of burning rubble which firemen were spraying on four sides.

The building was originally twin cottages which had been joined together about 1924. The original structures were put up in 1910. H. Stanley Parker conducted a cure cottage there until the 1940s when he sold it to Camillo Panerai. 3