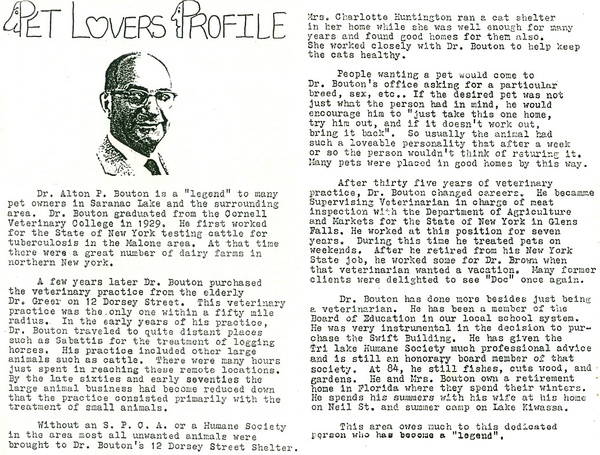 Dr. Alton Bouton was a veterinarian who served on the Saranac Lake School Board for seven years. He and his wife were active in the Village Improvement Society.

LAKE PLACID - Dr. Alton Parker Bouton, 99, formerly of Saranac Lake, passed away on Wednesday, Oct. 8, 2003 at the Uihlein Mercy Center in Lake Placid where he had resided since December 1998.

Dr. Bouton was born in Virgil on Aug. 31, 1904, the son of Lyman and Elma (Kelsey) Bouton. His mother passed away eight months after his birth and his uncle, George Bouton, assumed the responsibility of raising him.

He married the former Alice Lucyrose Kurth in Cortland in 1932

Dr. Bouton graduated from Cortland High School and went on to graduate from the New York State Veterinary School at Cornell in 1929. After graduating from Cornell Veterinary School, he did work in Saratoga County, inoculating cattle for the eradication of tuberculosis. He then worked in Malone as Franklin County Veterinarian from 1930 until 1934. He then moved to Saranac Lake and purchased the veterinarian business from an aging Dr. Green in 1934. His practice consisted of 60 percent large animals and 20 percent small animals. His office was at 12 Dorsey St., which had been a veterinarian's hospital since 1918. He practiced veterinarian medicine in this location for 34 years.

Upon retiring from practicing veterinarian medicine in 1965, he became a supervising veterinarian of the counties of Jefferson and Oswego with offices in Watertown. He became a regional veterinarian, which had jurisdiction over 17 counties. He retired from this work in 1972.

Through his acquaintance with Mrs. W. Alton Jones, some financial assistance became available for the beginning of the Saranac Lake Civic Center. Dr. Bouton was honored at the Saranac Lake Adult Center in 1998.

He was an avid hunter (rabbit, fox, deer) and fisherman.

There will be no calling hours. Services and. interment will be held at the convenience of the family, and burial will be in the family plot in the Virgil Cemetery in Virgil. The Clark Funeral Home in Lake Placid is in charge of arrangements.