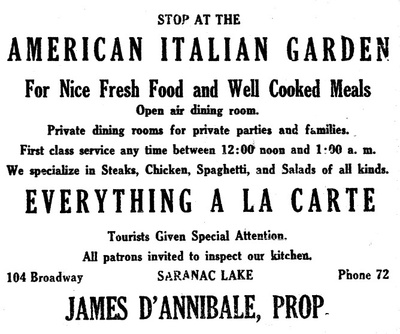 Lake Placid News, May 18, 1923The Italian-American Garden was a restaurant on Broadway from 1923 to 1924 that was operated as a speakeasy by Jack Tanzini and others.

Jack Tanzini of Saranac Lake, proprietor of the Italian-American Garden restaurant in the Adirondack village, was assessed heavily by Judge Cooper in federal court at Utica, when Tanzini entered a plea of guilty to violation of the Volstead law. The sentence was a fine of $1,000 and 30 days in jail. Tanzini was charged with possession of nineteen bottles of Canadian ale.