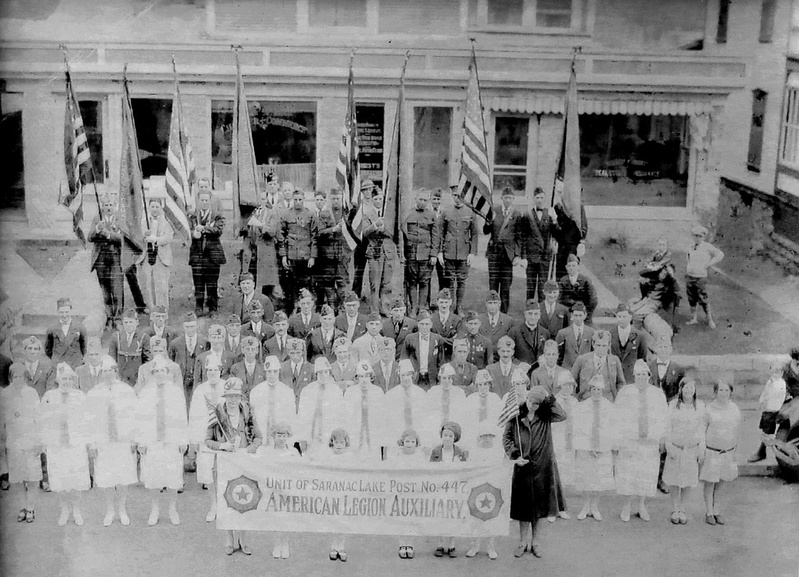 American Legion Post 447 assembled in front of the Chamber of Commerce, undated
Courtesy of the Veteran's ClubThe American Legion is a mutual-aid organization of veterans of the United States armed forces chartered by the United States Congress. It was founded to benefit those veterans who served during a wartime period as defined by Congress. The American Legion was founded in 1919 by veterans returning from Europe after World War I, and was later chartered under Title 36 of the United States Code. Its primary political activity is lobbying on behalf of the interests of veterans and service members, including support for veterans benefits such as pensions and the Veterans Affairs hospital system. In addition, it organizes commemorative events and volunteer veteran support activities.

The bottle of champagne donated 19 years ago by Joseph A. Del Vecchio, a Past Commander of the Post will be taken from the vault of the Adirondack National Bank by Bill Kerr, its custodian, and will hold its traditional place of honor on the dinner table as the members will give a toast to their departed comrades.

In 1919, a few men who had developed tuberculosis as a result of their war service, sought Saranac Lake as a place to cure and Dr. Edward N. Packard was assigned by the U. S. Public Health Service as Medical Examiner. These few men increased from time to time and reached more than 500.

A Legion Post was formed by these veterans and was originally known as the Jackson A. Matthews Post 614, in 1923. In 1927 the name of the Post was changed to the Matthews - Killeen Post. The name of Frank Killeen, a late Past Commander of the Post was added recognition of his diligent work in behalf of the disabled veterans hospitalized here.

The Commander of the Post now Joseph A. Dunn, of 37 Church st.

At present there are 32 members of the Last Man's Club, the majorty of them residing in Saranac Lake. Others are from Vermont, Pennsylvania, New Jersey, Florida and Virginia.

Names appearing on the American Legion charter from 1919 (at right) 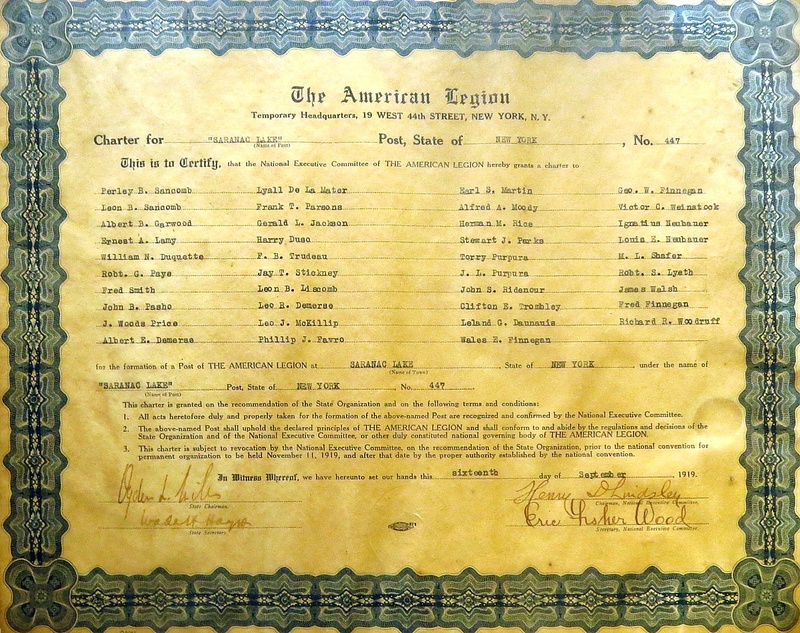 The charter of the Saranac Lake Chapter of the American Legion, September 16, 1919.
Courtesy of the Veteran's Club