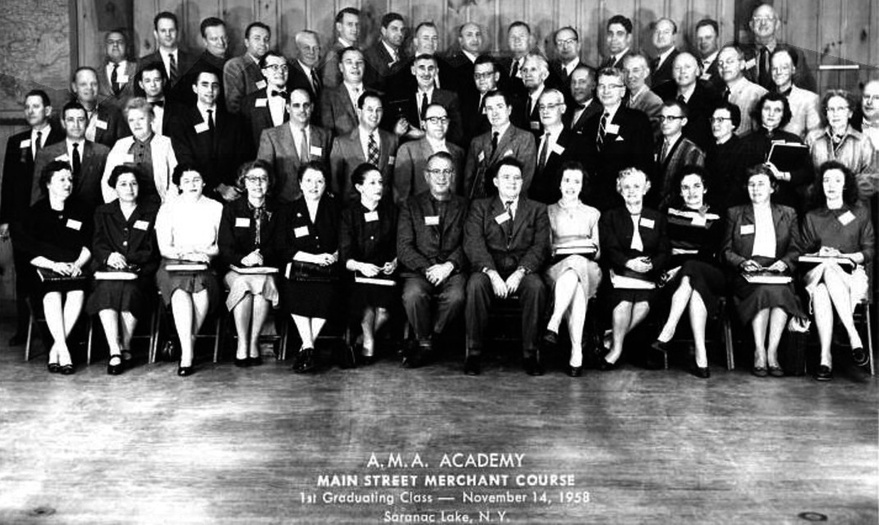 The AMA Academy has moved one step further in the direction of becoming a laboratory for Advanced Management by re-activating the ornate Mellon Library located on the Academy grounds. Mr. George Ahl, Jr., Director of the Academy, announced the appointment of Miss Jesse M. Frazer, as Librarian today.

Mr. Ahl said, "We plan to establish a vast reservoir of publications having to do with the advancement of scientific management. Many books and publications will be pooled in an effort to provide AMA registrants with latest reference materials on subjects which pertain to skills, tools and techniques of management. The Academy intends to become a large management research center where government and business executives can explore new methods."

The Academy has already graduated almost 6,000 top level executives who have come here from all over the word. Business representatives have come from foreign countries as far away as India and Egypt in a quest for the latest information and new techniques.

One executive from a foreign country who was sent to the Academy to study systems and procedures sat down to lunch with other executives and said, "Gentlemen, I want to warn you not to discuss anything of a confidential nature because I am from behind the Iron Curtain.

The men sitting around the table [illegible] as the man went ahead to explain, "You Americans are amazing, you sit here and give even your competitors ideas on how to improve. Your formula for success is based on getting things done through people and your strength on human dignity. We of the other world expected ultra efficient assembly lines of production, its amazing," he exclaimed shaking his head sadly.

The AMA Academy is fast becoming recognized as a rendezvous for better business methods and its impact is being felt and talked about all over the world. It is a meeting place where men can exchange viewpoints, discuss new concepts and philosophies of management. Thousands of pamphlets, books and periodicals will be made available to registrants and the latest information on management development.

The Mellon Library was donated to the Trudeau Sanitarium in 1903 by Mrs. Charles H. Mellon, in memory of her husband, who made the original plans. When the tubercular sanitarium was converted to the AMA Academy, the building also became another monument to the advancement of mankind.

The new librarian, Miss Jesse M. Frazer, formerly worked for the Saranac Lake High School, where she was librarian from 1931 to 1957, when she retired. She went to school in Scranton, Pennsylvania [illegible]