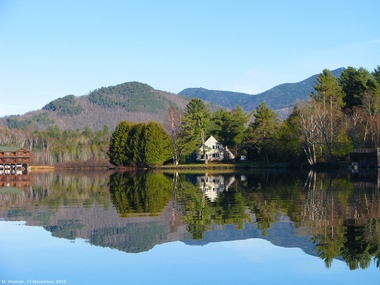 The house just right of center was the site of Martin's; the house was torn down in 1913 and has since been replaced by a larger house. The building at left is part of the Ampersand Bay Resort. Baker Mountain, left and McKenzie Mountain, right 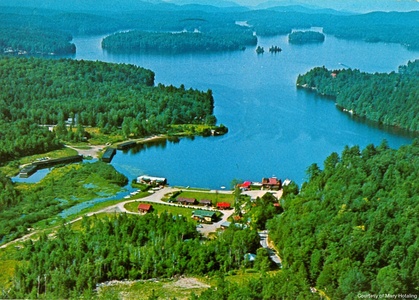 …A new cottage has been built for Otis L. Williams of New York on Ampersand Bay, In the edge of the forest just west of the clubhouse of the Ampersand Golf Club. It is of two stories, the exterior of shingles and the interior finish on the first floor Is in timber finish, while the walls of the second story are celled. Provision is made for the dining room on the north side of the veranda under an octagon roof…

Lower Saranac Lake, with Ampersand Bay in center foreground. The Von Dorrien hotel is at lower right, along with a short stretch of Ampersand Avenue. William Henry Jackson, c. 1905