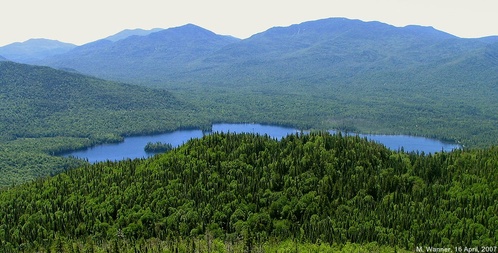 After the famous Philosophers' Camp assembled on the shore of Follensby Pond in 1858, the participants sought to purchase a permanent camp, settling on Ampersand Pond, eight miles to the east, and the surrounding 22,500 acres, a parcel which had been forfeited for unpaid taxes; they secured it for $600 and built a cabin by the summer of 1859. But the Civil War overshadowed interest in the project, and the property again reverted to the state for taxes.

It was acquired by the Santa Clara Lumber Company c. 1900 as part of a 20,000-acre parcel that included mounts Seward, Seymour and Donaldson. In 1938, Avery Rockefeller bought the 3800 acres around Ampersand Lake from Ferris Meigs for $157,700 using brother-in-law Griffith Mark as a front man, after a lengthy title dispute with the state of New York.

STATE LANDS GIVEN AWAY, SAYS JACKSON

Attorney General Declares Company Got Title Despite Court of Appeals.

Beautiful Ampersand Pond, Made Famous by Agassiz, Is Controlled by a Lumber Company.

ALBANY. May 12.—Attorney General Jackson, after three months of searching, has at last opened up the forest scandal. He has given notice that he will make a motion before Justice John M. Kellogg in Ogdensburg to be permitted to intervene in a case brought by the State against the Santa Clara Lumber Company. He makes the charge that valuable State lands were given to the lumber company under the administration of De Witt C. Middleton, as Forest, Fish and Game Commissioner.

Mr. Jackson has made his chief fight so far against the employment of special counsel in various State Departments. He has charged that in the Insurance and Forest Departments this system has resulted in the concealment of grave abuses. He declared that various serious charges had been brought to his attention, and that he intended to investigate them. His intervention in the Santa Clara Lumber Company case is his first move in this direction.

Found No Record of the Case.

A statement on this matter issued by the Attorney General's office says:

"There is no record of this action in the Attorney General's office, but Attorney General Jackson's attention was called to it after he took office. He immediately made an investigation which disclosed a very interesting condition of affairs, very forcibly illustrating the evils which may and do arise by having the legal business of the State attended to by special counsel over whom, the Attorney General has no control.

"While this action was brought for the ostensible purpose of re-covering penalties for cutting timber on the forest preserve lands, the result was the attempted transfer of lands for many years owned by the State, and included in the Adirondack Park, to the Santa Clara Lumber Company. From the record of the case there is every appearance that there was some understanding at the time the action was brought that such transfer should be accomplished."

The land in question consists of Lots No. 1 and No. 3, Township 21, Great Tract No. 1, in what is known as McComb's Purchase, in Franklin County. The greater part of it lies on the west side of Ampersand Pond. A State report says of this pond:

A gem of the wilderness, embosomed in mountain slopes, and surrounded by grand forest. This little lake is nearly round, about one mile wide and is embellished with two beautiful islands. • • • Aside from its beauty, this little lake has attained considerable fame by reason of the "Philosopher's Camp" which Prof. Agassiz once established on its shore. He erected a roomy, substantial log building, and in company with Lowell, Emerson, Holmes, and others a club was formed with the intention of making this a Summer home. 1

The property was owned by a family named Frazier, who acquired title as early as 1834, but no taxes were paid upon it for years, and in 1834 it was taken over by the State and was held under two deeds. The Forest Commission took possession of it, and all taxes have since been paid by the State.

Subsequently John H. Millard and George N. Ostrander claimed title to the property, and applied to the Controller for a cancellation of all tax sales. The Controller refused, and they took the matter to the courts. They were, however, defeated in the Appellate Division and also in the Court of Appeals.

Persisted in His Claim.

Notwithstanding this final decision, Ferris J. Meigs, who is the Treasurer of the Santa Clara Lumber Company, thought it advisable to buy up the supposed title of Millard, Ostrander, and the Fraziers in the property, and between Oct. 25, 1894, and May 19, 1896, got deeds from the various persons. He then began an action of ejectment against the Controller, in which he questioned the regularity of the proceedings by which the taxes were levied and the conveyances were made to the State. This action was terminated by a decision of the Court of Appeals, reported in 162 N. Y., wherein the State's title was absolutely confirmed.

Afterward, in June and July, 1903, the Santa Clara Lumber Company, of which Meigs was an officer, entered upon the property and cut and carried away 835 cedar trees. The Forest, Fish, and Game Commission on May 31, 1904, instituted an action against the company for $8,350 damages, and Lewis & McKay of Rochester, N. Y., were retained as attorneys for Commissioner Middleton.

The lands described in the complaint were identically the same as those involved in the title proceedings, but the lumber company, despite the Court of Appeals decisions, alleged that Meigs was the owner of the lands, and that the company cut the trees with his permission. Meigs swore to the answer.

This suit was never brought to trial. Upon a stipulation signed by Commissioner Middleton and Badger & Cantwell, the defendant's attorneys, the case was ended under the guise of a settlement of a dispute as to the title to real property. It was stipulated that the complaint should be dismissed upon the merits, and that the title of the lands described should be confirmed in Ferris J. Meigs or the present holders as against the claim of the State.

In return the defendant was to execute to the State a quitclaim deed to 100 acres off the west end of Lot No. 1 and the west half of Lot No. 3, and also a warranty deed of the east half of Lot No. 3. This was an attempt to transfer the possession of the State's title to the most valuable part of the property, the part fronting on Ampersand Pond. At the same time the lumber company was permitted to retain the right for six years to cut all timber ten inches in diameter on the land it conveyed to the State, and the exclusive right in perpetuity to maintain timber roads through it.

Pursuant to the stipulation a judgment was entered before Justice John M. Kellogg by the defendant's attorneys, no one appearing for the State.

Mr. Jackson contends that the title of the State to the lands had been settled by the Court of Appeals, and there was no question of title left to the Forest Commissioner to settle. His act in entering into the stipulation is declared to have been wholly without authority of law and in plain disregard of the provisions of the Constitution that the lands in the State forest preserve should not be sold or exchanged.

The Santa Clara Lumber Company is said to be now in possession of all the lands around Ampersand Pond, most of which formerly was held by the State.

1. While this is all true enough, the Philosophers Club never met on Ampersand.