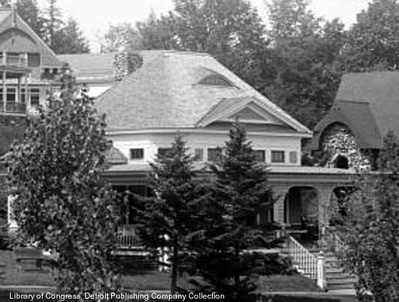 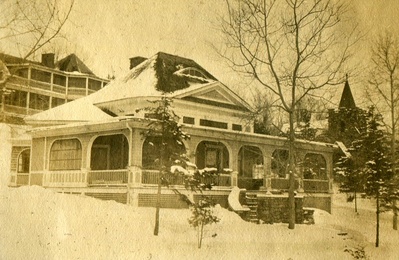 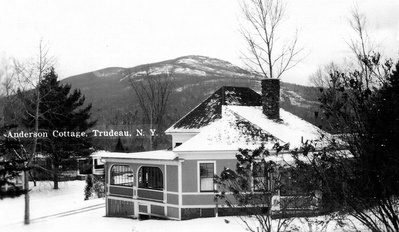 Anderson Cottage with Mt. Baker in the background.
Courtesy of Noreen OslanderDescription: Anderson Cottage is a one and one-half story frame cottage, built on the site of the Cooper Cottage called "Sunshine," which was removed in 1898. 1 It is the northernmost of the three picturesque cottages, Trudeau, Ladd and Anderson, and the second of them to be built. Design features which can still be seen include a cobblestone foundation and a double-pitched roof with a "stretched" or widened conical center section. Anderson was a four-patient cottage with the same basic plan as McAlpin, Inslee, Ladd and Rosenfeld, and included bathrooms and clothes closets. 2 It had a heating system installed at the time it was built. The porches were enclosed in clapboard after 1957.

History: Elizabeth Milbank Anderson was already numbered among Trudeau's "constant friends" when she gave this cottage. From 1893 to 1908, she single-handedly supported the operating costs of the Saranac Laboratory on Church Street. 3 Milbank, her maiden name, is shown as the owner of a camp on the map of Upper St. Regis Lake. 4 There was also a Milbank Cottage at Paul Smith's College which was very likely a remainder from the predecessor hotel, and presumably named for the guests who either had it built, or rented it on a regular basis. 5

SARANAC LAKE - For the first time since the 1950s, part of the Trudeau Sanitarium is again devoted to health care. High Peaks Hospice has moved its headquarters to the grounds of the American Management Association, located at the former Trudeau Sanitarium, world-renowned as a health care center for tuberculosis from late 1884 to the 1950s.

Dr. Francis Trudeau, a hospice volunteer and grandson of the sanitarium's founder. Dr. Edward Livingston Trudeau, commenting on the move, said: "I think it is tremendous that hospice will continue to make a contribution there as it gives great continuity to the history of health care. It is wonderful that AMA continues to make it possible for non-profits to use those cottages. A statue, Gloria Victis, (given to Dr. Edward L. Trudeau) now in the lobby of the Trudeau Research Institute, depicts an angel carrying a fallen warrior which is exemplary of the courage and purposefulness in dying. It is a talisman for hospice just as it was for the many, many, sick people who were at the sanitarium."

Hospice actually moved into the seven-room Anderson Cottage on April 22 with a staff of 19 and seven volunteers.

Lynn Sarr, executive director since August of 1989, saw hospice through the move from its previous office on Old Lake Colby Road. Before leaving to return to her specialty in clinical nursing, she thanked Mitchel Smith, AMA corporate controller, who worked with hospice, making it possible to remodel the building to its needs.

Organized in 1986, High Peaks Hospice provides comprehensive medical, emotional and spiritual care to terminally ill patients and their families throughout much of the Adirondack Mountain region of northern New York. It emphasizes pain and symptom control to preserve the dignity and quality of life. The goal is to make it possible for patients to stay at home rather than in the hospital. Last year, the agency expanded into Warren County where it now has an office in Glens Falls.

The Anderson Cottage was built in 1898 by Elizabeth Millbank Anderson for four patients and replaced an earlier cottage on that side known as the Cooper Cottage. The cottage was designed by architect W. L. Coulter and built by J.J. O'Connell. According to Trudeau Historian Mary Hotaling, she was a great benefactress of Dr. Trudeau's and paid for the entire operating cost of the Saranac Laboratory on Church Street from 1893 to 1908.

An open house will be scheduled soon at the new facility.