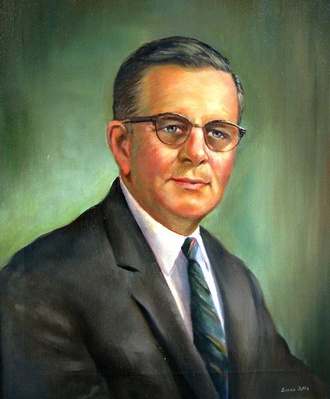 Anthony B. Gedroiz was a doctor in family practice in Saranac Lake from at least 1938 through at least 1971. He was also a World War II veteran.

He was the son of Anton Gedroiz, who came to Saranac Lake to cure. He lived at 17 Church Street.

He attended Saranac Lake High School, and graduated as valedictorian. He also played basketball, and was quarterback of the first football team; he scored a touchdown in the very first game played in September 1923.

He served as local health officer for Saranac Lake. Dr. Gedroiz was remembered as one of the few local boys who grew up to be doctors in Saranac Lake, Dr. Frank Trudeau being another notable example. He was a general practitioner and a surgeon; he was on the surgical and obstetrical staffs of the Saranac Lake General hospital and the visiting staff of the Lake Placid hospital.

A citation from the office of the commanding officer of the Alaskan area has been awarded to Capt. Anthony B. Gedroiz of Saranac Lake who is in the medical corps of the U. S. Army.

Capt. Gedroiz was awarded the citation at his base on June 24 for his work and the results obtained in the treatment of five enlisted men. The five men were critically injured in the Aleutian area during the Americans' attack on the Japanese. Captain Gedroiz' surgical work in saving their lives when there was a slim chance of recovery for any earned him the citation from the commanding general. All five of the men are now in the United States recuperating at an army hospital.

Captain Gedroiz had practiced medicine in Saranae Lake for eleven years before enlisting and being commissioned. He reported for active duty in the medical corps at Camp Barkeley, Texas on August 27, 1942.

In January of this year he was ordered overseas with his unit and stationed in the Aleutian area. His wife is the former Mrs. Ethel Dunn who was superintendent of the local hospital for several years. She now makes her home in Saranac Lake.

SARANAC LAKE - Dr. Anthony D. Gedroiz, 69, who had practiced medicine in Saranac Lake since 1931, died this morning at Saranac Lake General Hospital after a long illness.

Dr. Gedroiz was co-chairman, with William Meyer, of the Community Council College Committee which was responsible for the development of North Country Community College here.

He also was chairman of the fund drive for the present hospital, where he died today.

He was born in Detroit, a son of Anton and Stella Dombrowicz Gedroiz, and had lived here since 1919.

He attended Saranac Lake Junior and Senior High Schools and was graduated in 1924 as valedictorian. His pre-medical education was taken at St. Bonaventure University where he was active in football and basketball.

In 1926, he entered Georgetown Medical University, graduating in 1930, and served internships in Tuberculosis Hospital in Washington DC. and St. Francis Hospital, Trenton, N.J. He began his private practice in Saranac Lake in September of 1931. In 1942, Doctor Gedroiz entered military service as assistant chief of surgery in a station hospital and completed his term of service in November of 1945.

In 1962, Dr. Gedroiz, with Dr. Lawrence Early, moved his private practice to the medical offices at 44 Church Street in Saranac Lake.

Friends may call Sunday from 7 to 9 p.m. at the Keough and Son Memorial Chapels. A scriptural Rosary Service will be held at 8 o'clock. A Mass of the Resurrection will be offered at 11:15a.m., Monday at St. Bernard's Church. Interment will be in St. Agnes Cemetery in Lake Placid.

His family requests that friends wishing to remember him make contributions to the Saranac Lake General Hospital free bed fund.