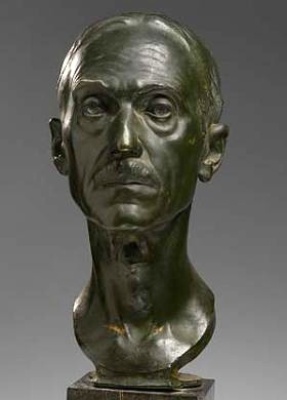 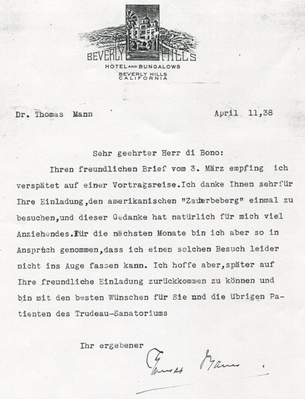 The Ed and Nita Worthington scrapbook contains this letter from Thomas Mann, author of The Magic Mountain, to Di Bona as chairman of the Rehabilitation Committee of the Trudeau Sanatorium, apparently responding to a request to speak to the patients at the Sanatorium; although he was unable to schedule the visit, he said that he found the idea naturally attractive. Born: Quincy, Massachusetts, October 11, 1896

A very talented, eminent sculptor and artist, Anthony (Tony) di Bona contracted tuberculosis in 1927, and in 1929 came to Trudeau Sanatorium to recover. He helped to organize the Saranac Lake Art League, and for many years was its president. He directed the ten annual Fine Arts Exhibits at the Harrietstown Town Hall. He began a collection of paintings, sculptures, black and white lithographs, etchings and block prints, executed by artist acquaintances, which are now in the collection of the Saranac Lake Free Library. He contributed greatly to Saranac Lake's cultural and artistic scene. Many years after his death, his dear friend, Charlotte Geffken, who had cured and worked with him here, came back to Saranac Lake and made gifts of various of his and her own art works to several friends and institutions in the area. The Adirondack Collection of the Saranac Lake Free Library received a number of these works, as did Smithsonian American Art Museum, Rutgers University, the University of Vermont, Castleton State College of Vermont and Green Mountain College.

A manila envelope in the Adirondack Collection of the Saranac Lake Free Library titled "P.A.S." is noted: "Article on P.A.S. with correspondence from Dr. Jorgen Lehmann. It was through A. di Bona's efforts, P.A.S. was first tried on Tony and 16 others at Trudeau." The note may have been written by Charlotte Geffken, who donated many of di Bona's materials to the library. This is now in the Historic Saranac Lake collection, 5/2013.

A brick at the Saranac laboratory has been dedicated in the name of Anthony di Bona by Historic Saranac Lake....Charlotte Geffken tells me that the very excellent exhibit of the work of Tony DiBona will remain at the workshop at Trudeau through Wednesday. Which should be good news to a lot of folks who haven't been able to get up there as yet. He is well worth seeing...

A biographical sketch in the papers of Ed Worthington. Courtesy of Janet Dudones

The grant of Prix de Rome gained him admission to the American Academy in Rome, and that of Prix de Paris took him to Emile Bourdelle in Paris.

Established his own studio in Boston in 1922. Executed sculptural compositions and commissions in the form of portraits, fountains, war memorials, etc. Also worked with Richard Recchia on fountains and monuments.

In 1933 organised the Saranac Lake Art League and taught its classes through 1945.

Among the many major art exhibitions in America where his work was shown were: The National Academy, World's Fair in New York City in 1940, Artist for Victory Exhibit at the Metropolitan Museum in December, 1942, and Whitney Museum*

A few of his noted works include:

Memorial tablet for the Little Red

Member of National Sculptural Society. Written in Who's Who in American Art - 1940

An exhibit of the sculpture of the late Anthony Di Bona opens tomorrow at the Workshop at Trudeau. The exhibit, which has been arranged by his friends, is sponsored by the National Sculpture Society. It is open to the public without charge from 10 a.m. to 5 p.m. each day and will continue for the next two weeks.

Many of Tony Di Bona's pieces, formerly only shown in plaster, have been cast in bronze and will be on display for the first time.

Tony Di Bona, who died last year, was one of the most outstanding artists ever to work in Saranac lake and is fondly remembered by many people who knew him as a brilliant but modest artist. He came her in 1929 after work in Boston and in Rome. He helped organize the Saranac Lake Art League and was one of the first directors of the Saranac Lake Study and Craft Guild. For more than twenty years here he gave without limit of his frail strength to many students and friends.

His own works include a bust of Dr. Lawrason Brown, now in the Medical Library at Trudeau [in 2013, in the Saranac Laboratory Museum, 89 Church Street], the bronze plaque on Little Red, a bronze portrait of Dr. Edward Baldwin [in 2013 in the Smithsonian Institution in Washington, D.C.; see photo above] and a variety of other pieces.

His work was shown at the National Academy, at the 1940 World's Fair, and at an exhibit at the Metropolitan Museum in New York in 1942. #