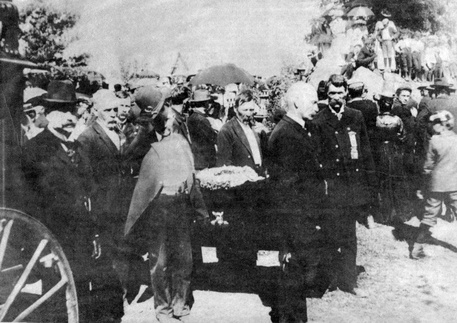 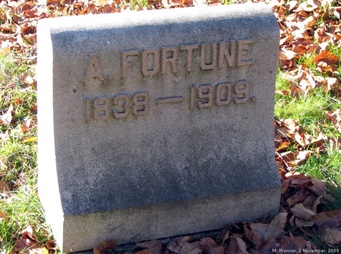 The tombstone of Antoine Fortune in Pine Ridge Cemetery Born: 1838

Antoine Fortune was the founder of A. Fortune & Company, a furniture dealer and funeral home.

An excerpt from an article titled John Brown, Lake Placid's link to the Civil War, by John Duquette

...In 1899 Saranac Lake played out the final act of the Harper's Ferry tragedy. Miss Katherine McClellan, a local writer-photographer and admirer of John Brown, became the unexpected recipient of a trunk containing the bones of 10 of Brown's followers, killed at Harper's Ferry. She secretly held the trunk until arrangements could be made for their burial with honor beside their leader at the North Elba farm. An ornate casket was donated by the Town of North Elba and McClellan engaged the services of undertaker Antoine Fortune to place the remains in the one casket, to which a silver plate had been fastened bearing the names of the 10 men. On Aug. 30 of that year, a military ceremony honored the memory of the fallen comrades and Fortune arrived with the hearse to take charge of burial. As the crowd stood at attention, a unit of the 26th Infantry from Plattsburgh fired the traditional rifle salute.

Antoine Fortune has purchased the Lattrell House on Broadway and had it removed to make room for a large four story brick building which he expects to begin immediately.