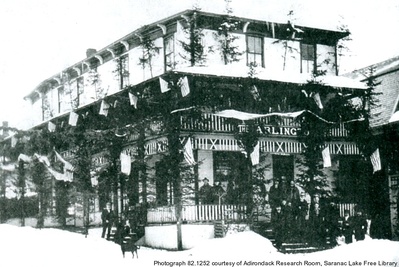 The Arlington Hotel was at 81 Broadway, on the northeast corner of Broadway and Bloomingdale Avenue, opposite the St. Regis Hotel. The 1895 Sanborn map shows what appears to be the same building's footprint divided between a grocery store on the southern, Bloomingdale Avenue end and a plumbing business in the northern part. The 1899 map shows it labeled "The Arlington." In 1919, the Adirondack Record reported that the hotel — then owned by George L. Starks and James A. Latour — closed abruptly when the manager disappeared with everything that was movable and of value. In 1920, a vocational training school was established there for tubercular servicemen from World War I. After the Arlington was sold to Kit Potter c. 1920, it became the Potter Block. It was known as the Adirondack Hotel1 from at least 1933 through 1945. In 1926, the Alpine Hotel was built across from it, on Broadway. The Potter Block was torn down in 1978; the site is now a vacant lot.

The Potter Block at the corner of Broadway and Bloomingdale Avenue, which came under fire as unsafe and hazardous at the Saranac Lake Village Board this week, enjoyed a heyday of importance as did most of our recently decaying landmarks tagged for discard.

The Potter Block today-bears evidence of its proximity to the St. Regis Hotel fire as well as to the lack of general upkeep due to the fading economic importance of hotels in general in this community.

When it was first built in the early 1890s it was named the Arlington Inn. Dave Durgan constructed the three-story corner hostelry but sold it to James Leonard very soon after its completion.

The Arlington was a family hotel, and always full of guests, visitors, salesmen and travelers. Its porches were popular with crowds gathering to watch Winter Carnival parades and other Broadway delights of the time, including Sparks Circus which came to the village every summer.

The Arlington boasted a regular dining room for its patrons and a side dining room for workers or people coming in for lunch at noon. There was also a bar, barbershop, and a private livery stable for Mr. Leonard's race horses but big enough to accommodate the horses of guests traveling in that manner.

Johnny Patnode had charge of the stables which were reached through the alley on Bloomingdale Avenue.

The porches were torn off over the years as the building was enlarged to four stories and redesigned.

The sidewalks along Broadway were wooden and fairly high in places to avoid the heavy spring mud and water runoff.

Most guests of the Arlington arrived by horse and buggy, and later, by train, as the railroad was completed in sections until it finally reached Saranac Lake.

The first hotel clerk at the Arlington was John English who later worked at the St. Regis on the opposite corner and eventually purchased it in partnership with Ed Murnane when its owner, John Morgan, drowned in 1926.

When the St. Regis was built it dominated the corner, and that intersection was always called "The St. Regis Corner" after that and still is.

The Arlington was sold to Kit Potter after several years under James Leonard's managerial talents and became more of an apartment house. It flourished for a time and the night club in the basement was famous for its floor shows, some of which were pretty risque for the 1920s and 1930s.

On Broadway, over the Top Hat Bar, was a magic shop where, for 10 cents, I could walk away with "Instant Smoke from your Fingertips," "Nail through Finger" or "Dead Finger in Box."

WHERE IS MURNEY? HOTEL IS CLOSED

The Arlington Hotel at Saranac Lake is closed, and the whereabouts of Frank Murney, its manager, is not known. Rumors say that Murney left for elsewhere on Sunday night. He did not notify George L. Starks and James A. Latour, owners of the building, of his departure, and the first they knew of it was Tuesday morning. Mr. Starks and, Mr. Latour took charge at once, and found that the place had been cleaned out of about everything that was movable and of value.

Saranac Lake has a large colony of service men who have been sent there by the government to regain their health—men threatened with or having incipient tuberculosis. For these a vocational training school has just been established. It opened Monday with classes in law and salesmanship, and other classes were to be started daily. All classes were expected to be in full swing by Monday of this week. Nearly 100 men enrolled at the beginning and this summer was being increased by additional men as the various classes were established. The school is in charge of H.H. Harpster, of Philadelphia. T.C. Strickland, for ten years head of the commercial department of the Saranac Lake High School, has been engaged by the government to direct the commercial classes of the training school. Miss Lucille Mellvane, of Saranac Lake, directs the general education course. The class rooms are in the building formerly known as the Arlington Hotel. The service men at Trudeau and Ray Brook are transported to and from the school daily. –Ex.

Who recalls, asks Frank Knapp of Bloomingdale, when they raised the old Arlington Hotel one story? And when it was the first meeting place of the Vets' Post?

The Arlington Hotel was on the corner opposite the St. Regis. It is now called the Potter Block.