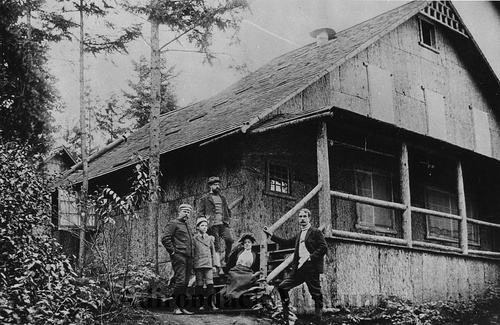 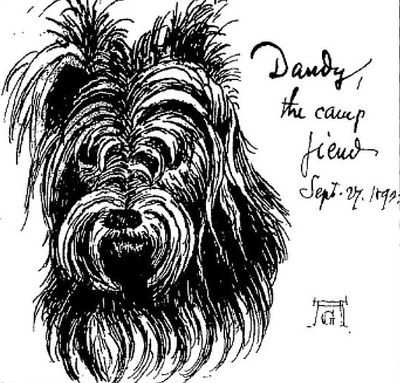 A drawing by Arpad Gerster
of one of his dogs that came with the family to their camp.
(Photo courtesy of the Adirondack Museum)
Adirondack Daily Enterprise, August 17, 2007Arpad Gerster and 19th-century camp life at the Ad'k Museum

BLUE MOUNTAIN LAKE — Dr. Arpad Gerster was a Hungarian surgeon, scholar, artist, humanist and sportsman of great energy and intellectual capacity. He was also a diarist whose keen eye for detail, wit, and engaging personal prose paint a vivid picture of the Adirondacks in the late 1890s.

One can join Sidney S. Whelan Jr. on Monday, Aug. 20 for an illustrated lecture titled “Arpad Gerster and 19th Century Camp Life in the Adirondacks,” presented by the Adirondack Museum at Blue Mountain Lake.

Part of the museum's Monday Evening . Lecture Series, the program will be held in the museum's Auditorium and will begin at 7:30 p.m…

Whelan is the editor of “Notes Collected in the Adirondacks 1895 & 1896,” Gerster's illustrated diaries for that time period. Five full volumes of the doctor's journals, as well as his sketchbooks, are part of the Adirondack Museum's collections, the gift of Arpad Gerster's grandson, Dr. John W. Gerster.

Arpad Gerster (1848 - 1923) emigrated to the United States in the 1870s. A man of extraordinary interests and powers of observation, he was a linguist, musician, artist, traveler and writer, in addition to conducting an exemplary career in medicine. His diaries chronicling his visits to the Adirondacks (Raquette and Long lakes, where the Gersters had camps) from 1895 to the early 1900s are a unique and exceptionally vivid and astute record of the region in that time period, according to the museum.

Gerster was equally at home in the operating room or camped beside an Adirondack lake. His delight in “tramping” through the forests or paddling the streams is evident in his diaries, as is his talent for bringing to life the people and places around him with words.