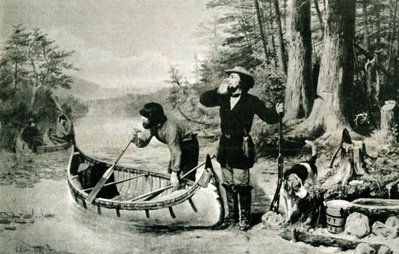 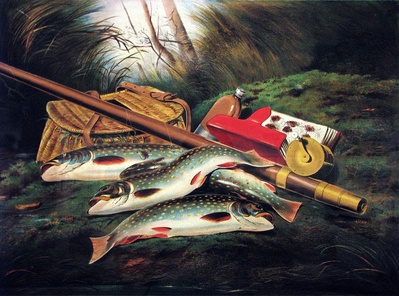 “America owes a heavy debt of gratitude to A. F. Tait,” wrote the editor of Antiques in 1933, “Though born an Englishman, he had lived in this country long enough, and loved it deeply enough, to record pictorially distinctive aspects of its life with penetrating sympathy and undeviating accuracy of detail.” Tait was one of the best known and prodigious painters of Adirondack animals and the sporting life in 19th century America. Many of his almost 1,700 oil paintings, sketches and watercolors hung in dozens of museums around the country.

Born in 1819 near Liverpool, Tait became a well established lithographer. In 1838 he married Marian Cardwell in Manchester. By 1850 he and Marian left England for New York City where he started a career in painting. By 1852 two events occurred which were to direct his career: The printmaking firm of Currier and Ives purchased some of his paintings, and he made his first trip to the Adirondack Mountains. An enthusiastic sportsman and lover of the outdoors, Tait adopted the Adirondacks as his spiritual and artistic home. He loved observing and painting deer, bear, grouse and other wildlife in their habitat. Currier and Ives printed 3 dozen of Tait’s scenes over the years. These lithographs of Adirondack scenes helped to popularize the Adirondacks with sportsmen.

Tait was one of the few 19th century artists who actually lived in the mountains for a long period. He built a summer camp on South Pond near Long Lake and later a year round home there called “Woodside.” In April 1872 his wife Marian died unexpectedly. He married her niece Polly Bartoft in December of 1873. Two children were born to them, Arthur James Blossom Tait (1875) and Francis Osborn Tait (1880). Polly died of “childbed fever” after this second son. In 1881 Tait married Emma Hough, Polly’s half sister, age 23, who had been living with the family.

In his later years, A.F. Tait turned to painting domestic animals and pastoral scenes as the public taste changed, however he never lost his keen eye for detail. His dramatic and skillfully rendered paintings continue to appeal to art lovers today. Tait died at age 86 in 1905.

In Footprints on Adirondack Trails, Charles Wardner wrote of his his uncle and father guiding Mr. Tait:

Seth (Seth Wardner, James Wardner’s brother)…was engaged for a month by Mr. A.F. Tate [sic] of Yonkers, NY. Mr. Tate had a friend with him who also wanted a guide… Mr. Tate’s friend, Charles Needham , wanted to camp some place near a rapid stream where he could wade or fish from the shore…We moved the tents and camping outfit over to the Osgood and camped on the outlet near the mouth of Cold Brook… 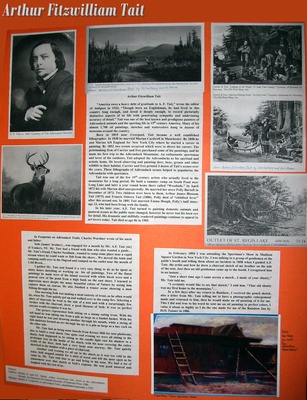 "Arthur Fitzwilliam Tait" by Pat and Tom Willis, photo of display taken 2/2009. Click on the image to enlarge the display.

I guided Mr. Tate and found it a very easy thing to do as he spent so many hours sketching or working on his oil paintings. Two of the finest paintings he made were of the island covered with white birch trees and a general view of the pond from a high bank on the east shore. I learned to appreciate more deeply the many beautiful colors of Nature by seeing him capture them on canvas. He also finished a winter scene showing a man fishing through the ice.

One morning Seth was making a meal entirely of trout, as he often would do, when Mr. Tate quietly got up and walked over to the camp fire. Selecting a piece of charcoal, he went to the side of a tent and with a surprisingly few strokes with the charcoal, drew a good likeness of Seth. It was so perfect anyone would recognize it was he.

Mr. Tate had us bring some boards from Keeses Mill for tent platforms, also to build a cook shack. One quite cool evening we were all sitting in the shack. Seth happened to be sitting so the candle light cast his shadow in a grotesque way on the inside of the shack, with his nose covering the entire width of the door. Seth had a very large nose anyway. Mr. Tate quietly sketched in the shadow with a piece of charcoal.

Another cool evening we all sat in the shack as it was too cold in the tents. Seth stepped outside for a stick of wood and left the door open as he came in. Mr. Tate told him to go and bring in his nose. We had a lot of amusement over that sketch at Seth’s expense. He was good natured and laughed with the rest of us.

In February 1894 I was attending the Sportman’s Show in Madison Square Garden in New York City. I was talking to a group of gentlemen at the guide’s booth and telling them about an incident in 1858 when I guided A.F. Tate, the artist and how he drew a charcoal sketch of my brother on the side of the tent. Just then an old gentleman came up to the booth. I recognized him in an instant…

“Just a short time ago I came across a sketch…I made of your shanty,” Mr. Tate told me.

“I certainly would like to see that sketch,” I told him. “That old shanty was my first home in the mountains.”…

In a few days after my return to Rainbow, I received the pencil sketch, also a letter from Mr. Tate telling me to have a photographic enlargement made and returned to him, then he would make an oil painting of it for me. This I did and true to his word he sent me an oil painting in perfect colors. I value it about as highly as I do the one made for me of the Rainbow Inn by H.O. Tanner in 1886.