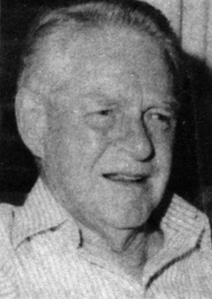 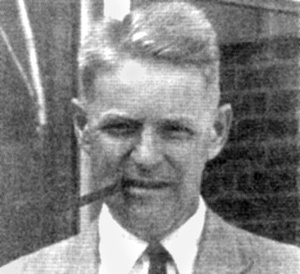 From an article on the TB Reunion, Adirondack Daily Enterprise, August 19, 1987:

Wareham, an architect, came to Saranac Lake in January 1944 after he contracted TB while working in South America. He tried to enlist in the U.S. Army, but was rejected when he was diagnosed as having TB.

While he cured at the Agnew Cottage on Shepard Avenue — breathing in the cool mountain air and getting lots of rest, as the doctors ordered — he spent his time studying for his state architect's certification. When he was no longer studying, he was working on architectural designs of local projects. After he recovered from his TB, he became partners with local architect William Distin.

"I had been doing enough architecture. I liked living here and I liked the work. I made good friends here, I had no desire to go back," Wareham said.

Wareham was called to Washington to join a government program headed by the late Marshall Schaffer to design five basic hospitals to be guides for hospital design in the United States. He was assigned the tuberculosis hospital.

During World War II, he was sent to Trinidad to work with the Anglo-American Architectural-Engineering Corps. On return he was sent to South America under the Inter-American Affairs Program headed by Nelson Rockefeller. The purpose was to improve the health and sanitation in nine South American countries. Wareham, assigned to Paraguay, designed and supervised the building of two hospitals and six health centers. Returning to the United States, he volunteered for the Army and was rejected because of tuberculosis caught in Paraguay.

He came to Saranac Lake Jan. 13, 1943, cured at the Shults Cottage and returned to Washington to complete the design for the basic U.S. tuberculosis hospital.

After his health broke again he returned to Saranac Lake in the late 1940s where he worked for William Scopes and William Distin, later joining Distin's firm where he became a partner in Distin and Wareham.

Describing his work in the basic tuberculosis hospital as "learning more and more about less and less," Wareham was delighted with the varied architectural challenges a small area gave. Among his many designs were a series of local one room, or small schools, including the Lake Clear school, several Adirondack camps and homes at Westport, Lake Champlain, a Saranac Lake Free Library extension, the Alton B. Anderson Memorial Bandshell in Riverside Park and many private homes in the area.

Wareham served as a vestryman, clerk, junior and senior warden at St. Luke's Church and was a member of the local Rotary Club. He was an ardent model railroader, golfer, hiker and traveller.

He is survived by his wife and daughter; his son-in-law, Jonathan Driller; a sister, Ellen V. Wareham of Clearwater, Florida; in-laws, Andrew and Eleanor. Cheselka, and their two children, Andrew and John, of Setauket, Long Island.

A funeral service will be held at 2 p.m. Tuesday, March 15 at St. Luke's Church in Saranac Lake with the Rev. Fredrick Dennis officiating. Interment will be in May in St. John's Cemetery.

Those wishing to remember, him are asked to contribute to the Church of St. Luke, the Beloved Physician, Memorial Endowment Fund, the Saranac Lake Voluntary Health Association, Saranac Lake Free Library or Trudeau Institute.

Funeral arrangements are in care of the Fortune-Keough Funeral Home in Saranac Lake.