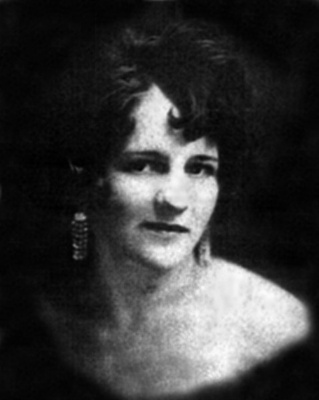 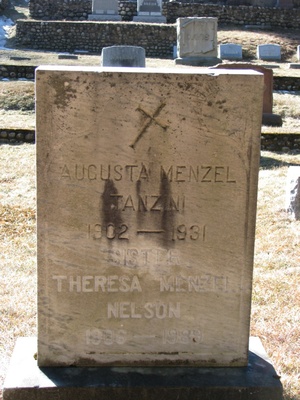 Augusta Menzel Tanzini was the second wife of stonemason and bootlegger Pietro Tanzini, who disappeared on December 17, 1930. On February 17, 1931, she was found in her bedroom, dead, of a gunshot wound to the head, an apparent suicide.  She was a daughter of Frank and Theresa Menzel.

SARANAC LAKE, Feb. 17—Just two months to the day after her husband disappeared, Mrs. Peter Tanzini, 29, of this village was found dead in her bedroom at her home at 25 South Olive street. She had been shot through the head. A 22 revolver was found beside the body.

As a result District Attorney Harold W. Main of Malone assisted by Lieut. C. B. McCann of Troop B state police, arrived here late this afternoon to make an investigation. Authorities refused to state last night whether or not it was a case of suicide or murder. An autopsy will be performed this morning.

Mrs. Tanzini's body was found at two o'clock this afternoon by Norman Deno, a hired man. He told District Attorney Main he heard a shot and upon entering Mrs. Tanzini's bedroom found her dead.

The disappearance of Mrs. Tanzini's husband, Peter Tanzini, 47, mason contractor on December 17, 1930, resulted in one of the greatest man hunts ever held in the North Country and the case has been listed among the unsolved mysteries of the Adirondacks.

When Tanzini was first reported missing there came a report that he had been taken "for a ride" and his mutilated body found in Meacham woods which proved to be untrue.

According to a report made local police at the time, Tanzini was last seen about five o'clock on the afternoon of December 17 when he left his home to keep an appointment with a friend at the Club restaurant on Main street. At that time he told his wife he would return in about an hour.

He went to the restaurant and was requested by his friend to come back about eight o'clock. Tanzini promised to do — so, but failed to keep the appointment.

Within a few hours after Tanzini's disappearance, Sergeant Henry Schermerhorn and Corporal Harry McCann of the state police and village police rounded up a half dozen of alleged bootleggers, gamblers and others. These men were taken to police headquarters and questioned for several hours, but shed no light on the mystery, according to police.

Tanzini was the victim of an unknown assailant's bullet about nine years ago. At that time he was riding in an automobile with another man and two women beyond Elizabethtown late at night. The driver was signaled to stop by two men in the road who wore civilian clothes. He sped past the strangers, who pursued the car and fired several shots, one of which seriously wounded Tanzini.

The searchers overtook and searched, the machine, displaying some kind of badges. No contraband of any kind was found, but the strangers stated they were placing Tanzini and his companion under arrest and ordered them to drive to Plattsburgh police headquarters.

The supposed officers told Tanzini and his party that they would drive behind them to the jail, but disappeared on a side road on the journey. It has never been learned whether the assailants were officers or enemies of the party.

Dr. Wardner, acting coroner, stated tonight he had no statement to make and had left the entire investigation in the hands of the county prosecutor and state troopers.