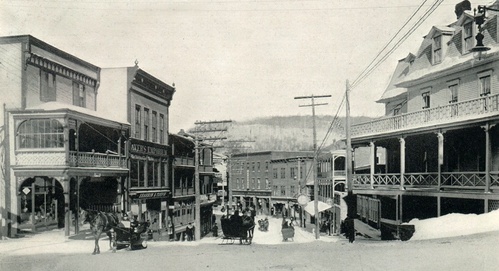 Broadway, looking north from Berkeley Square, c. 1909. Ayer's Emporium is the second building from the left. (From Saranac Lake in the Adirondacks: The North Woods City of Health and Opportunity, Mid Winter Carnival, 1909. Courtesy of the Adirondack Research Room, Saranac Lake Free Library) 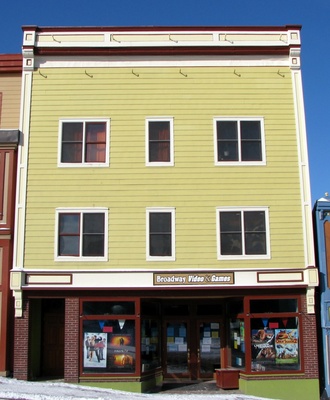 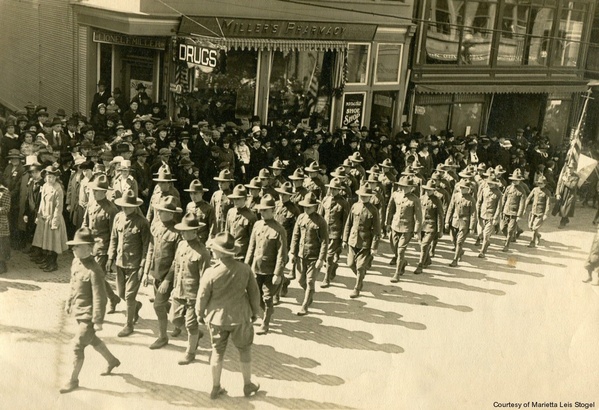 This building was built prior to 1891, possibly by Anna O. Miller or possibly by someone else who was paying land rent to Miller. At any rate, the lot upon which it stands was purchased by W. S. Fowler as part of a larger parcel in the transaction of October, 1890 mentioned in the discussion of the Kendall Building. The date of the deed was 12/23/90. No mention is made of a building. However, in a transfer from Fowler to Frances H. Ayer recorded 3/28/91, the document notes that the sale includes a "store building and lot". Fowler could move fast, but it stretches credulity a bit too far to surmise that he could have had a 30 x 80 foot three story structure built in five months, four of which were winter. Later deeds for other properties refer to the building as the "Ayer Block" and it may have been that Frances Ayer herself had built it on Anna Miller's land. One way or another, it cost her $3225 to get the property from Fowler.

By 1917, both commercial stories were being leased by "G. A. Toupin and Co.". This was the same George Toupin who was to figure in the Town Hall fire rescue nine years later. Toupin’s catered to the ladies as had its predecessor. Among items to be found there were coats, suits, gowns, and "Gossard Corsettes". The store was still doing business late as the early 1980s.

The executors of the Hennessey Estate lost the property to George J. and William A. Carson for $12,000 in a foreclosure action; and, in September, 1975, George Carson sold it to Maurice Chagnot who, four months later, turned it over to the Maurice Chagnot Trust.

In recent years, the Ayer Block has been so radically altered that only the relatively simple storefront and a modest cornice remain to hint at its original appearance.