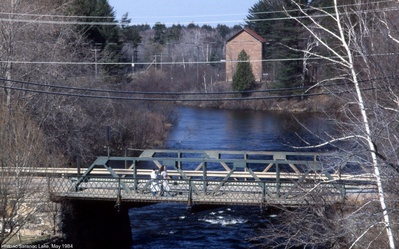 The 1906 iron bridge, since replaced 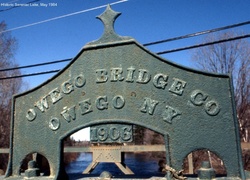 Plaque on the 1906 iron bridge

Baker Bridge carries Pine Street across the Saranac River, north of Saranac Lake. In 1854, it was just north of the site of Colonel Milote Baker's Hotel and store; the road at that time was the Northwest Bay Road.

The caption on this photograph reads "1906 Pine Street Bridge, Prescott House." It is taken looking Southwest from the Bloomingdale Avenue side of the Saranac River. The Baker's Hotel is at left and the William Stearns Cottage at 5 Pine Street is at right; the Prescott House is at the top of the hill. The north end of Main Street (the Dugway, the present site of Triangle Park) can be seen immediately above the left side of the bridge. Courtesy of Susan Edelberg Donnelly.