Bartlett's, 1879.  Photograph by George Baldwin.
Courtesy of the Adirondack Experience 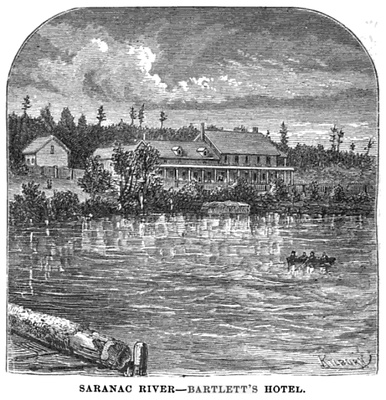 When William F. Martin gave up his lease of the Captain Miller House in Saranac Lake, it was taken over by Virgil C. Bartlett who ran it for two or three years. In 1854, however—influenced, no doubt, by what his predecessor had successfully done—Bartlett bought 267 acres of land on Upper Saranac Lake and built a small hostelry of his own in a then extremely remote spot.

He chose a knoll of narrow ground between a deep bay on Upper Saranac and Round Lake. The distance between the two sheets of water made a short and easy portage and the place was soon dubbed Bartlett's Carry. The hotel was called "The Sportsmen's Home" on advertising cards and letter heads, but was generally known and spoken of as "Bartlett's." 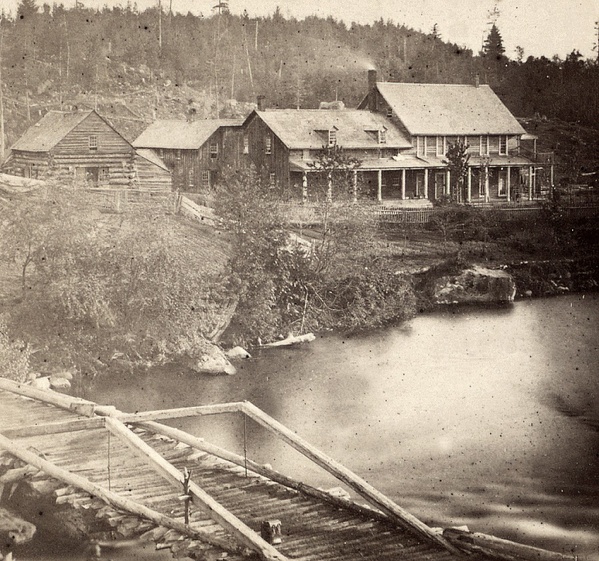 Bartlett's Upper Saranac Lake, 1870. By Adin French Styles.
The Miriam and Ira D. Wallach Division of Art, Prints and Photographs:
Photography Collection, The New York Public Library.
The New York Public Library Digital Collections.  The house, which accommodated about fifty guests, was a low, two-storied, rambling structure, devoid of outward beauty, but offering cleanliness, coziness, and comfort within. It faced the first stretch of the Saranac River, which breaks out of Upper Saranac Lake, half a mile away, and flows into Round Lake just below Bartlett's Landing. This first bit of the famous stream plunges downward over many rocks in a series of short falls and pools and rapids. Here, in the old days, the speckled trout were abundant, and no better fishing was to be had in all the woods. This is vouched for by such of the sport as Dr. Van Dyke and Dr. Romeyn of Keeseville.

"Bartlett's" never grew to be a very large place. Both Mr. and Mrs. Bartlett were conspicuous in their day for an utter lack of the buying or building mania. They never added to their original purchase of land, nor barring a few outbuildings did they ever greatly enlarge their original house. They were perfectly content with what they had. It paid them well, and instead of reinvesting each season's earnings in a larger plant, they preferred to spend them in travel and in comforts and luxuries which their neighbors lacked. The unchangeableness of their little hostelry was one of its homey charms. 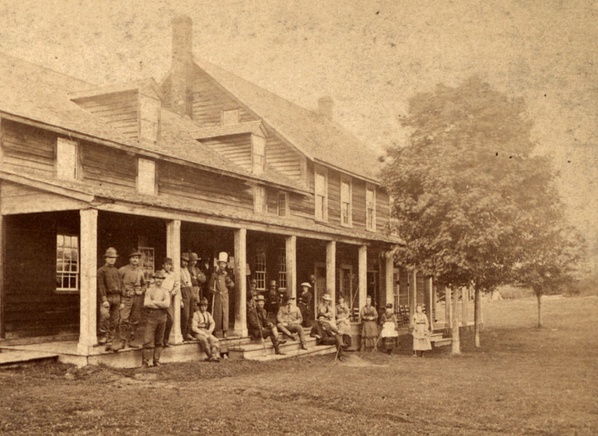 Upper Saranac Lake, Bartlett's, 1870. Photograph by George W. Baldwin
The Miriam and Ira D. Wallach Division of Art, Prints and Photographs:
Photography Collection, The New York Public Library.
The New York Public Library Digital Collections. Remote as it was in location, it soon became the connecting link and favorite half-way house between the two great highway lakes of this section. Its patronage was, therefore, largely transient, although some families spent the season there. Mrs. Bartlett soon established the reputation of setting the best table in the mountains, for both guest and guide. It followed, as the night the day, that guides were always eager to get their parties there for a meal, and were never in a hurry to take them away. 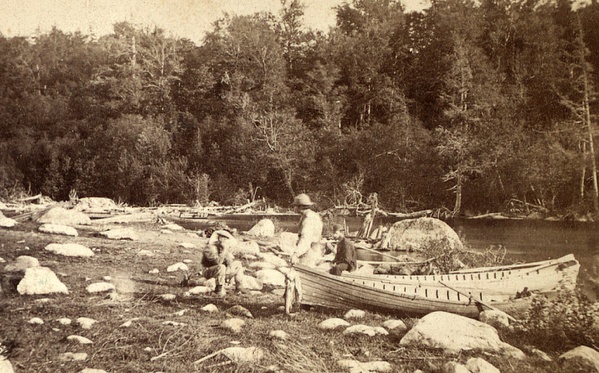 Bartlett's Landing, Upper Saranac Lake, 1870. By Adin French Styles.
The Miriam and Ira D. Wallach Division of Art, Prints and Photographs:
Photography Collection, The New York Public Library.
The New York Public Library Digital Collections.  It will be recalled that the lady who wrote of the excellence of Mrs. Martin's table, said it was second only to Mrs. Bartlett's. Another lady, Mrs E.J. Dunning of New York, who was soaked and nearly swamped in crossing Round Lake in a high wind, said the discomfort was not too high a price to pay for a meal of Mrs. Bartlett's brown bread. This excellence of food and the oddities of the owner combined to make "Bartlett's" one of the most familiar and talked of places in the woods.

In 1891, it was purchased by the Saranac Club, which ran it as a semi-public club until 1913, when it was sold to Henry B. Corey for $22,000; he immediately re-sold it to the Bartlett Carry Club, which expanded it, replaced the 1850 wooden dam, and built a nine hole golf course. In 1949, due to financial difficulties, it was leased to Bankers Trust, which ran it as Pyramid Camp for their employees until 1965, when it was sub-leased to the Will Rogers Memorial Hospital. In 1968, A.J. Yardley, a descendant of original club member Farnham Yardley took control and ran it as rental cottages. In 1985, A.J. Yardley's widow, Fran Yardley, sold it into cooperative ownership. 1 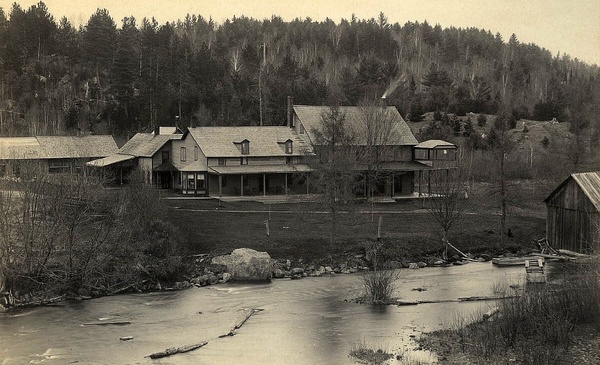 Miss Bragdon, the manager of Bartlett Club, has arrived to get the house ready for the season.