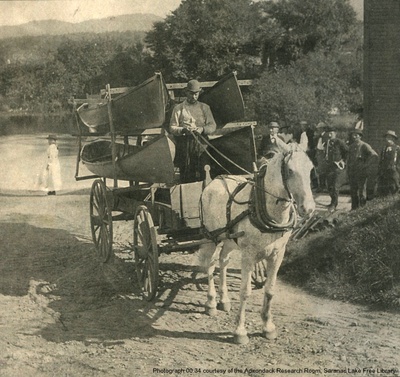 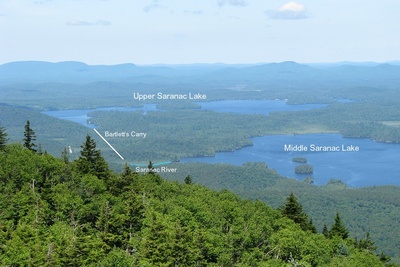 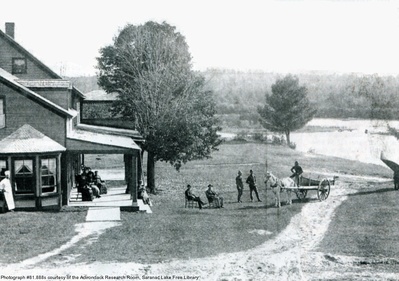 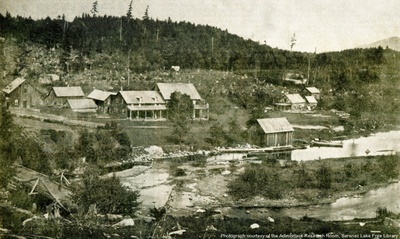 Bartlett's Carry, c 1870. Photograph by George Baldwin.
Adirondack Daily Enterprise, February 25, 1995 Bartlett's Carry was a quarter-mile portage trail that enabled boaters to get from Upper Saranac Lake to Middle Saranac Lake. The Saranac River, which connects the two lakes, drops thirty feet in two tenths of a mile, which makes for a fast, rough current. It is possible, though dangerous, to shoot the rapids going downstream from Upper to Middle; going upstream is impossible. The carry trail used to take the most direct route, but in the early 1970s, the carry was re-routed to avoid the camps of the Bartlett's Carry Club; the carry is now about four tenths of a mile.

The Sportsman's Home, better known as Bartlett's, was at the Middle Saranac end of the trail. Its remaining buildings constitute the Bartlett's Carry Club. 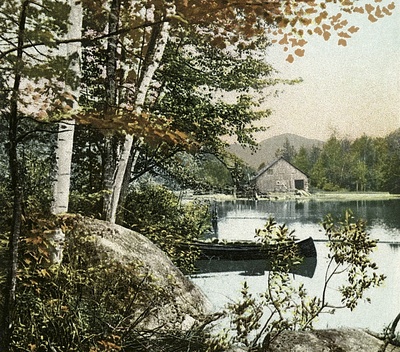 Old Mill at Bartlett's Carry, Saranac Lakes, N. Y., 1898 - 1931.
The Miriam and Ira D. Wallach Division of Art, Prints and Photographs: Photography Collection, The New York Public Library.
The New York Public Library Digital Collections.  Virgil C. Bartlett took over the Miller House in Saranac Lake after William F. Martin's lease ran out in 1850. Bartlett managed the place, which was located where the village office now stands, until 1854 when he also decided to move further into the wilderness. The site he chose was even more remote than that chosen by Martin.

He purchased 267 acres where a set of rapids flowed out of Upper Saranac Lake to form the headwaters of the Saranac River. These rapids necessitated a "carry" for all boat travel in both directions. Because there was no road in the vicinity, all transportation was funneled through this bottleneck much to Bartlett's advantage. Boats from the south came by way of the Raquette River and the old Indian Carry, and from the west came boats from Tupper Lake via the Sweeney Carry. From the north came patrons from the St. Regis chain and from the east there was a steady flow from Martin's Hotel on Lower Saranac Lake. In Bartlett's day and age he couldn't have picked a better spot.

Foot of the rapids

He built his lodge at the foot of the rapids in the form of a story-and-a-half frame building connected to a two-story addition which could handle 50 guests. Together with a barn and several outbuildings he also constructed a bridge across the river. A horse-drawn wagon was available with a rack for hauling boats across the carry. Just as Mrs. Paul Smith was noted for her cooking ability so, too, was Mrs. Bartlett considered to be highly proficient in the kitchen category. It was a well-known fact that every knowledgeable guide managed to have his party arrive at Bartlett's for mealtime. 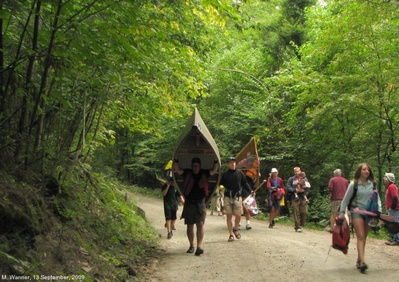 The portage at Bartletts Carry, during the Adirondack Canoe Classic "Virge," as he became known, was famous for two conflicting traits. On the one hand he was noted for possessing a violent temper, while on the other he was renowned for his soft-heartedness. All of the local guides were known to enjoy his temper outbursts which were always accompanied by a proficient recital of profanity which the boys referred to as a "show." John H. Titus, of Bloomingdale, in his booklet Adirondack Pioneers relates one such incident when the actor disappointed his audience.

Virge had purchased a brand new cutter for winter travel which was nicely upholstered with fancy cushions. On the day that the sleigh arrived he had it placed on the porch where everyone could admire it. Always fond of dogs he kept a large kennel of hounds and during the night some playful puppies got up on the cutter and, chewed the cushions to pieces. On the following dawn one of the guides spotted the mischief and immediately alerted the rest of the boys to get ready for the show. Pretty soon Bartlett came out on the porch and when he viewed the damage he turned purple. He was just about to cut loose when he heard a snicker from behind a nearby tree. Quickly realizing what was going on he controlled his temper and said, "Well boys you can go back now. I'm going to put this off until I'm alone."

On the opposite side of the ledger from his temper tantrums there appear many entries which record his good Samaritan acts. He was known to toss out a lazy guide or a shiftless worker but was always a soft touch for the honest down-and-outer. During one winter, word came to him that a former employee had met with an accident in the woods. He immediately went to the lumber camp and brought the injured man back to his lodge. He then sent a messenger to bring Dr. Romeyn from Keeseville to treat the patient until he recovered.

Bartlett adored children and was extremely fond of animals. Among his many pets was a tame otter which was well fed on the fat trout from the rapids. In addition to his large pack of hounds, he kept fawns, raccoons, white mice, flying squirrels, and even a parrot which he had taught to say, "Good night, Mrs. Bartlett."

By necessity most of the clientele arriving at Bartlett's, were just passing through, but there were also some loyal guests who came to stay awhile and some came to stay for the entire season. He enjoyed the same flow of famous persons that frequented the early Adirondack hotels for the simple reason that, in order to travel the waterways, coming or going they must pass his portal. "Adirondack" Murray came with his faithful guide "Honest John" Plumley. Renowned for relating far-fetched tales of his hunting and fishing experiences, Murray had gained a suspected notoriety. When any listener was rash enough to question his veracity, he would simply point to his guide and say, "Ask John." 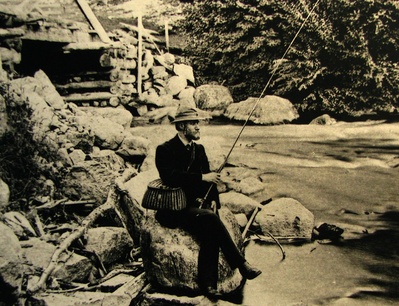 Of the two best known among the regulars at Bartlett's one was a famous author and the other a famous fisherman. The former, Henry Van Dyke, in his book entitled Little Rivers asks the question "Did you know Bartlett's in its palmy time? " He then elaborates on all of the amenities of the place and the pleasant days he spent there, claiming that Bartlett's was by far the coziest place in the entire Adirondacks. During one such stay he made a side trip to visit the site of the old "Philosophers' Camp" on Ampersand Pond. After locating the cabin ruins he wrote: "The only philosophers to be seen were a family of what the guides quaintly call quill pigs. The roof had fallen to the ground; raspberry bushes thrust themselves through the yawning crevices between the logs; and in front of the sunken doorsill lay a rusty, broken iron stove, like a dismantled altar on which the fire had gone out forever."

The famous fisherman was Dr. J. R. Romeyn of Keeseville, who first came to Bartlett's in 1855. He returned each spring for 45 years to enjoy the trout fishing at the rapids. He was an ardent fly fisherman, as was his friend Van Dyke, and together they claimed that the best fly fishing in all of the Adirondacks existed right there in Bartlett's front yard. This was probably true during Romeyn's early visits but by 1900, the year of his last trip, trout fishing was on the wane. A quote from Donaldson's history records the passing of both the trout and the faithful Dr. Romeyn in his inimitable style.

"At last, in the spring of 1901, he came no more, and early in the following year he died. Men said he did not come because he died; but we who knew the lonely fisherman will always think he died because he could not come."

When it came to politics, Virge was an absolute despot and anyone working for him was told how to vote in no uncertain terms. On each election day he would escort his flotilla of guide boats to the settlement and the outcome of any race was never certain until the "Bartlett Bloc" had cast their ballots.

Virgil C. Bartlett died in 1884 at the age of 68. His widow continued to run the place for several years until selling out to a group of wealthy former patrons who organized under the banner of "The Saranac Club." In 1891 the original lodge burned down and in 1893 the club built a new headquarters on the hill above the rapids. Some members also built private cottages for family vacations. The carry was kept open to the public with meals and lodging available at the club. Today the area is once again being operated as a summer resort and remarkably, after 132 years since Virge arrived, it is still widely known as "Bartlett's Carry."