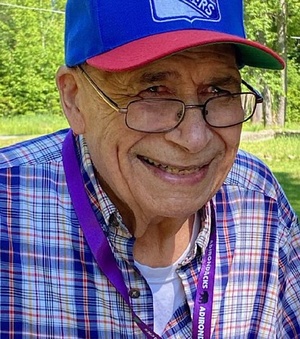 Undated, unidentified clipping in a scrapbook at the Saranac Lake Veteran's Club.Born: August 16, 1924

Basil C. Johnson was a World War II veteran.  He was a son of Mr. and Mrs. Charles Johnson.

Born in Saranac Lake on Aug. 16, 1924, he was the son of Charles and Jessie (Woodruff) Johnson. Basil is a veteran of the United States Army, serving during World War II from 1943 to 1945. After serving in the Army, he was employed by Dairy Dell and Texaco. Later he worked as a truck driver for A.F. Short and for Madden’s Transfer and Storage. Following that, he made charcoal at Litchfield Park in Tupper Lake and drove truck for Elliott Hardwood out of Potsdam. He then became an independent truck driver for 12 years until his retirement. He enjoyed tending his flower beds, walking in the woods, clearing brush with his 1953 Ferguson tractor and sharing local history with others.

The family wishes to thank the friends and neighbors who made it possible for Basil to remain at home: Arlene Tinkler, Jon Hough, Paul Guerrette, Mary Lou and Tom Cassavaugh, and Donna Wilcox. His peaceful passing would not have been possible without the support and skillful guidance from the staff at High Peaks Hospice.

Calling hours will take place at the Fortune-Keough Funeral Home in Saranac Lake on Friday, Sept. 11 from 4 to 6 p.m. A funeral service will immediately follow calling hours at 6 p.m. at the funeral home, with the Rev. Harold Clark officiating. Burial will take place on Saturday, Sept. 12 at 10 a.m. at the Brookside Cemetery in Bloomingdale. Basil’s family understands that the extenuating circumstances of the COVID-19 pandemic may make it difficult for some to attend. The funeral service will be webcast on Fortune-Keough Funeral Home’s Facebook page at 6 p.m.

Friends wishing to remember Basil C. Johnson Sr. may make memorial contributions to High Peaks Hospice in care of the funeral home. Family and friends can also share their memories, photographs and video condolences at fortunekeoughfuneralhome.com.