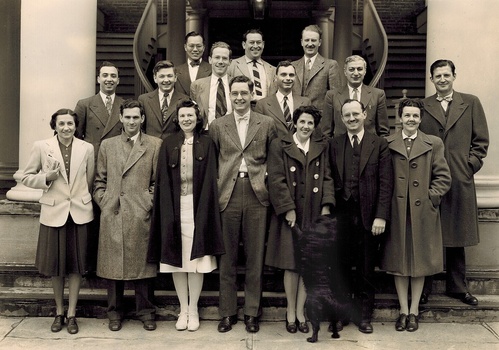 In 1928 he came to Ray Brook. He served as resident physician at Newton Memorial Hospital, Chatauqua County from 1939 to 1941. He returned to Ray Brook where he eventually became supervising physician and worked as a radiologist from 1941 to 1952. In 1952 he was appointed Supervising Roentgenologist at J. N. Adams Memorial Hospital in Perrysburg where he remained until 1960 when he returned to Ray Brook until the hospital closed in 1971, at which time he retired from the State Department of Health but continued to serve as consultant to the New York State Chest Clinics until they closed in 1975. His wife also worked at Ray Brook.

Dr. Fruhlinger resided at his home in Turtle Pond with his wife Cecilia Slavik Fruhlinger, who predeceased him on November 15, 1998.

"The hospital you are visiting today has been an institution for the diagnosis, treatment, prevention, and study of tuberculosis since 1904. It was the first State hospital in New York for the treatment of tuberculosis and amongst the first in the United States. More than 25,000 patients have been admitted here during the past 64 years. The history of Ray Brook has been molded by the progress in the management of tuberculosis over the years, and I shall indicate these changes as we go along.

(Before you is an exhibit by Joseph Kurung picturing the changes in the physical environment of Ray Brook during the past half century. These alterations, and the reasons for them, are inherent in the history of the institution and I shall refer to them in the story that follows.)

How did it come about that the first State hospital for tuberculosis in New York was located in this remote part of the North Country? Perhaps you have already learned of Dr. Edward Livingston Trudeau, a physician who became ill with tuberculosis, and, unable to carry on medical practice, came to the Adirondacks to spend his last years in an environment that he loved -- the great forest, the lakes and streams of the wilderness. The improvement in his own health and two other epic events -- the sanatorium movement in Europe, which emphasized fresh air, good food, and above all, rest for the treatment of tuberculosis, inspired him to establish the first public hospital for treatment of tuberculosis in the United States. (in 1880) Robert Koch in Germany discovered the cause of tuberculosis - a bacteria now termed the tubercle bacillus. These two events provided a reliable and scientific basis for the diagnosis, treatment, and study of tuberculosis. This new knowledge of rest treatment and bacterial recognition of tuberculosis initiated a new and rapidly expanding era in the entire field of tuberculosis.

The hospital was constructed with these principles in mind. In fact, the first patients were housed in tents on the hill during the summer before the building was completed. Admission to the hospital was limited to those with early or minimal disease, and, therefore, a better chance to recover and return to useful life. Most of the patients were young adults, and, therefore, able or well enough to take care of their personal needs at the hospital, where they remained for an average period of nine months.

Remember, tuberculosis is a chronic disease with a strong tendency to relapse after a period of apparent recovery. Many months were required before a patient was non-infectious and safe to return to their homes. As you might guess, confinement in a hospital, remote from family and friends, posed a major problem in treatment. There was little point in providing a hospital for treatment and isolation of patients if they declined to come here or were homesick and unhappy and left prematurely. This prompted a change in the atmosphere of the sanatorium. It was necessary to make the hospital homelike, comfortable and cheerful so that the patients would be content to remain for the full period of therapy. The interior of the building was decorated and furnished with charm and good taste; special emphasis was placed on the Dining Room, which was redecorated and serviced with linen. Doctors and nurses dined in the same area as the patients. Everyone dressed for dinner, the boys in jackets and ties, the girls groomed, painted, and frocked. There was a white coated waiter at each table. Dining became a social event. After an abundance of good food, well served, the young people looked forward to the evening Social Hour. Most people, of course, were the boys’ visits to the ladies’ solarium for games and conversation. There were also changes outdoors, to encourage patients to walk over the extensive grounds during the morning and afternoon walk hours, to play golf and fish in the brook, and in winter to skate in the pond. The patients were also expected to contribute something towards their own care by cleaning their own rooms and performing some assigned task in hospital maintenance so they would not lose their sense of being able and useful and, therefore, make it easier for them to return to a normal life after discharge from the hospital. With few exceptions, these young people enjoyed their stay at the hospital, which the dubbed “The Country Club”.

You see, treatment of chronic disease required something more than doctors and nurses administering strictly medical care. There was a human and social element to be considered, and that is still recognized today despite the remarkable scientific progress.

This period of rest, fresh air, food and happy environment was essentially unchanged for thirty years. What were the results? Among the patients with early tuberculosis at that time, 2 out of 3 recovered from the disease. This was encouraging but the majority of tuberculosis patients has more advanced disease, and their outlook was less encouraging. Something more was needed(:) therapy. In the 1930s collapse therapy became popular in this country. It was reasoned that if rest to the patient was helpful in treating tuberculosis, rest to the diseased lung itself might be even more beneficial. So, measures were designed to put the lung to rest permanently or temporarily by surgical methods. As a result, in 1939 a surgical unit was constructed at Ray Brook - the Infirmary Building with 100 beds.

For the next twenty or more years, this active service stimulated the Medical and Laboratory sections in research and teaching, as well as administering to the medical needs of the more advanced cases of pulmonary tuberculosis. The rest, treatment and attention to the social aspects were still an essential part of the tuberculosis regimen, and the outlook for previously hopeless cases of tuberculosis was definitely improved, but there was a price to pay in surgical mortality and morbidity, and successful treatment still meant many months away from home and work.

Finally, the chemotherapy era arrived in tuberculosis. SM, Para Aminosalicylic acid, Isoniazid were found to be effective drugs when used properly. This led to a change in both medical and surgical treatment of pulmonary tuberculosis. It was now safe to remove diseased lung rather than collapse it. This meant not only more effective therapy, but also that surgical treatment could be applied to those patients who formerly could not withstand collapse procedures. However, it became apparent from study and experience over years that drugs alone, when scientifically administered, were highly effective in the treatment of tuberculosis, even in the most advanced cases. This brought another change to Ray Brook. The period of hospitalization could now be decreased, and more patients admitted for treatment in a year. Surgery was no longer necessary for most patients. It was no longer necessary to come to the mountains for treatment and, moreover, there were fewer new cases of tuberculosis so in 1965 the Sanatorium Building was closed. Bed capacity was reduced from about 350 to 100 beds, and all the patients were now hospitalized in the Infirmary Building.

The period of hospitalization is much less for most patients. Treatment is relatively simple and highly effective, and many patients can now return to a normal life soon after hospital discharge.

Now, the hospital is preparing a new page in its history. In addition to the treatment of tuberculosis, the Legislature has passed a law that will enable State Tuberculosis hospitals to admit nontuberculous pulmonary disease patients for treatment.

I have traced briefly the history of Ray Brook in relation to the changing trends in therapy. Scientific progress has been highly effective in tuberculosis control but the basic problem remains - the patient himself. He must, as in the past, be persuaded to take advantage of modern treatment, be assisted in making adjustment to several months of hospitalization, be educated with regard to his disease and the necessity for continuing medicine for a year or two after hospital discharge. In short, a chronic infectious disease such as tuberculosis requires more than “magic bullets” for successful prevention and treatment, and nurses and other hospital personnel will continue to have an essential role in the management of these patients.”

Thank you for today's telephone call and the pleasure of hearing from you again. I am glad you are a "survivor", using your own expression, and that you and Mrs. Fruhlinger still reside in Saranac Lake Village area. I told Lois of your invitation to stop to see you if we get up your way. Since the telephone conversation had principally to do with the Ray Brook article co-authored with Dr.s Monroe and Beck, I shall take the liberty to send a copy of this letter to Dr. and Mrs. Monroe. Of course you know that Dr. Beck died.

You might be interested to learn that reference is made to Ray Brook in my book "Foundations Well and Truly Laid" published by the Alumni Association of the College of Medicine of SUNY Health Science Center in Syracuse in 1994, pages 132-133. My favorite quotation in that book is from Winston Churchill:

"History with its flickering lamp stumbles

along the path of the past, trying to

reconstruct its scenes, to revive its echoes"