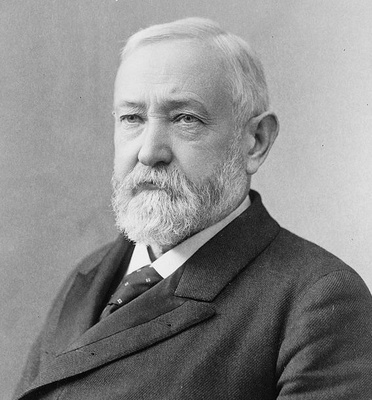 Benjamin Harrison was the 23rd President of the United States, serving from 1889 to 1893. He was born in North Bend, Ohio, a grandson of President William Henry Harrison; he moved to Indianapolis, Indiana at age 21, where he become a prominent politician. During the American Civil War, he served as a Brigadier General in the XX Corps of the Army of the Cumberland. After the war he unsuccessfully ran for the governorship of Indiana, and was later appointed to the U.S. Senate from that state.

A Republican, Harrison was elected to the presidency in 1888, defeating Democratic incumbent Grover Cleveland. His administration is most remembered for economic legislation, including the McKinley Tariff and the Sherman Antitrust Act, and for annual federal spending that reached one billion dollars for the first time, a spending level that cost him a second term.

About May of 1892, Mrs. Harrison was diagnosed with tuberculosis. The president took his wife to Loon Lake, where she rallied, and he returned to Washington. But by the end of August her situation had deteriorated, and he arrived also in need of rest. Mrs. Harrison asked to be taken home to the White House, and her illness was announced on September 14. Daily bulletins were issued, and on September 21 the couple arrived back in Washington, where Caroline Harrison died on October 25, 1892. 1 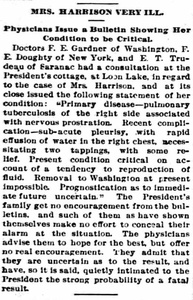 AWAITING PRESIDENT HARRISON — Saranac Lake dressed in its best bib and tucker on a warm day in September, 1890, to welcome President Benjamin Harrison to the village. On tour the year after his inauguration, President Harrison stopped off at Saranac Lake and dedicated the second section of the new school building.

In the above picture, which is believed to have been taken by George Baldwin, the camera was set to the left of the speaker's platform, and shows the Berkeley Hotel and several buildings on Main street. Although some have been necessarily altered in the 58 years that have elapsed since this picture was taken, each building pictured above still stands.

Although many attempts were made to identify the people pictured above, only one person, the man under the huge flag, was identified. He was Elmer Dobell, constable and lamp-lighter of that period.

Fowlers Livery, on the left of the picture is now the 300 Taxi company. The building then housed the J. R. Williams Grocery store.