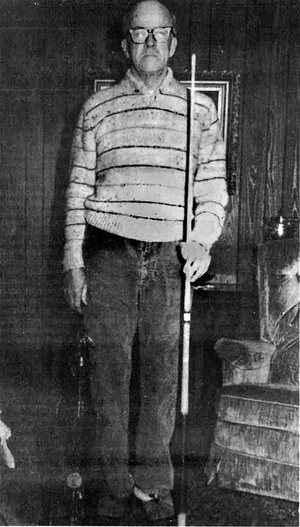 Mr. Robinson graduated from Saranac Lake Central High School in 1939. He served a short period in the United States Cavalry in 1943 in Kansas and received a medical discharge. He worked at the Silver and Troy Laundry in Saranac Lake from 1943 to 1967. He later worked for New York Telephone Co. from 1967 to 1986. He owned and operated the Palace Billiard Academy Pool Hall from 1967 to 1986.

Mr. Robinson is best known and will be remembered by family and friends for his pool playing. He was an accomplished pool player and won many awards over the years, including first place in the Legion Miller Hilite and later in the 8 Ball Tournament in Lake Placid in 1988. He also won several local tournaments in which he was selected to advance to compete in tournaments in Las Vegas in 1982, 1983 and 1984.

He was predeceased by one daughter, Debbie, in 1994, and one brother, Leland Robinson, in 1957. Funeral arrangements are with the Fortune-Keough Funeral Home in Saranac Lake. There will be ho calling hours, Funeral services will take place at the Convenience of the family.

A Lifelong Knack for Pool

One thing Bernard Robinson, 69, of Saranac Lake hates about playing pools in bars is having to shoot with a cue other than his own 60-inch McDermott.

“I hate it when I'm in a bar up against a wall and I've got to pick out a little fiberglass cue that long.” He held his hands up with about a yard of empty space between them

Mr Robinson is a mild-mannered man who takes pool seriously He has been playing for 50 years and, on March 28, he won the A division of the Northern New York 8-ball tournament at the Holiday Inn in Lake Placid. He collected $750 in winnings.

“I like a lot of room around the table where I can use my cue," said Mr. Robinson. I always take my own cue. It makes a big difference.

[illegible section] three inches for a comfortable, firm grip. It cost him $200 15 years ago.

Mr Robinson is tall and slim. He has a high forehead that looms over horn rimmed glasses. Toting his cue in a soft, leather pouch, he looks like a poolhall Don Quixote.

He started shooting pool five decades ago in a poolhall beneath Altman's clothing store [Palace Billiard Academy] in Saranac Lake. In l967, he bought the poolhall himself and ran it in the afternoons and evenings while working days for the phone company. He closed the hall in 1980.

Now, he has retired from the phone company and spends much of his free time shooting pool. He drives 50 miles to Malone twice a week to play at the only poolhall in the area.

Lake Placid used to have a poolhall on Main Street, as did many other towns in the North Country. But the small table at bars hurt business on the big tables [illegible section]

Mr. Robinson plays in the bar league in Saranac Lake but, at heart, he is a big-table player.

Players accustomed to shooting across shorter distances on bar tables are often overwhelmed by the long green stretches of a big table. Mr. Robinson said.

“A lot of those players on small tables are lost on big tables,” he said.

The 8-ball tournament, which is organized by Upstate Vending Services of Lake Placid, was held for the eleventh time this year. Mr. Robinson has entered every year and walked away with second and third-place trophies in the past. But this year was the first time he won.

In 1982. ‘83 and '84, he won the regional finals of the Miller Hi-Life Tournament and was awarded a free trip to Las Vegas to compete in the national finals. All three years he finished in the upper half of 350 players.

Despite his recent accomplishments, he played better pool when he was younger. Mr. Robinson said. He prefers straight pool, where a  player shoots rack after rack of balls until he misses, to 8-ball, which is played with just one rack of 15 balls.

In his younger days, he would often run 40 or 50 balls, he said. Twenty years ago, he ran 70 balls without a miss, his personal record. Now, the longer runs are infrequent. He relies more on clever positioning of the cue ball to carry him through games, he said.

“I have trouble with difficult shots, length-of-the-table shots, more than I used to." he said. “I have to play perfect position. When I'm playing good, I'm shooting all easy shots. When you're playing good, you have a feeling," he went on.

His reputation worked for him in the Tournament, he added, giving him a psychological edge over his opponents.

“When you play somebody and they know you have a reputation, it sort of works on them” he said.

“Pool is a game of touch,” he said.  He has never been able to teach others how to develop that touch.

“You have to have the ability,” he said. “I never was any good at demonstrating or giving lessons.  I would say ‘Well, you can watch me.”

The backroom image of pool is largely untrue, he said.  He has played for money but never much.  The most he’s played for is $10-20 a game, he said.