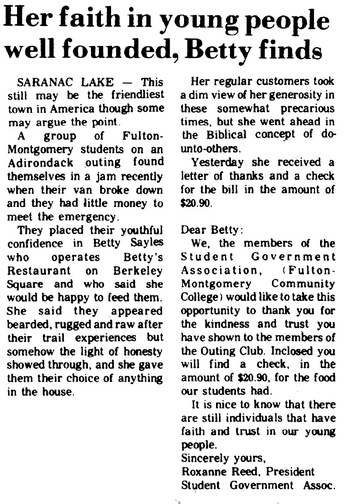 Adirondack Daily Enterprise, February 27, 1975, Historic Saranac Lake Collection. Bernie Wilson's Restaurant was located at 4 Broadway. It operated from the 1940s (when it sponsored a bowling team) through at least 1962 (when it suffered a night time break in). 1978 Winter Carnival parade passes Alice's Restaurant, Historic Saranac Lake Collection.On September 27, 2019, Bob Seidenstein's column in the Adirondack Daily Enterprise discussed some story-telling Bob remembered overhearing at Alice's: "The boys" were so dubbed by Alice's waitress, Helen Bishop. Their label is in quotation marks because at that time, all of them were rocking the wrong side of 70. Then again, I think Helen had just entered her ninth decade, so to her they probably WERE boys. Their usual lineup was Jug Hayes, Jim Gragg, a Lewis or two, Ed Worthington, Francis Gauthier, and someone or other I forgot. they always sat on the counter on the north side of the joint; I always sat in a booth on the south side. Being in the booth kept me out of their line of sight, but still well within hearing range. . . . Francis Gauthier went into story-telling mode. . . . Mr. Gauthier (called "Gokey" by his friends, since that's pretty close to the Quebecois pronunciation of his name) was a great guy. I knew him all my life and remember him as always being warm and friendly, always willing to chat, always upbeat and pleasant. He'd been a cop when I was a little kid and of course had a stash of cop stories. . . .