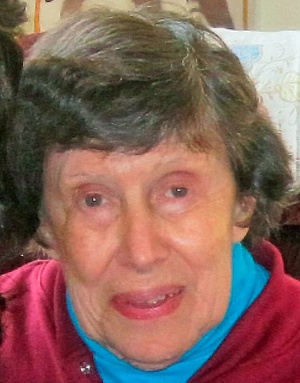 Bertha Hoffman worked with her husband in the Hoffman Pharmacy.

She was born in Uniontown, Pennsylvania, on May 10, 1927, the daughter of Louis Brown and Selma Greenwald Brown.

She is predeceased by her husband of 57 years, Howard, whom she married in Washington, D.C., and by her brother Jerome Brown of Coral Springs, Florida. She is survived by her daughter Leslie of Saranac Lake and her sons Stanley, of Charleston South Carolina, and Charles, of Waltham, Massachusetts; and seven grandchildren: Emily, Amanda, Susanna, Nicholas, Richard, Alexander and Catherine.

During World War II, Bertha was a secretary in the Chemical Warfare Service in Washington, D.C., and subsequently transferred to the Justice Department. She and her family moved to Saranac Lake in 1951, where she worked with her husband in the Hoffman Pharmacy and raised her family. Her community service included membership in the Women’s College Scholarship Fund and participation in the Meals on Wheels program. Bertha was a member of the Eastern Star.

Funeral arrangements are in care of the Fortune-Keough Funeral Home in Saranac Lake. A graveside service will take place at noon on Thursday, June 17 at Pine Ridge Cemetery in Saranac Lake.

Memorial contributions may be made to the Saranac Lake Free Library or charity of your choice. Family and friends can also share their condolences at fortunekeoughfuneralhome.com.