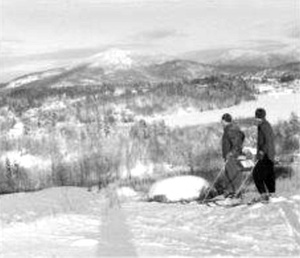 Betters Hill, with Dick DeMers Robert W. DemersBetters Hill was the site of the Kiwassa Farm. It was also the site of one of the first ski areas in Saranac Lake, located between Branch Farm Road and Kiwassa Lake Road. In the winter of 1940-41, Tom Cantwell and Bob Demers moved a derelict ambulance to the top of Betters Hill on Kiwassa Road and used one of the rear wheels as the drive mechanism for a rope tow. (See the page for Robert W. Demers for his description.) New downhill maneuvers were practiced here by Tom Cantwell, Bob Distin and Bill Distin, Tom Clement, and Bob Brown.

This tow worked very well.   We had few breakdowns and a few bitter cold mornings when it was hard starting the old Cunningham engine.

The one inch manila rope for the tow needed to be "untwisted."

This meant taking it that Fall to the Lower Saranac lake where all 3,000 feet of it (the tow was 1500 feet long) was dragged in the water behind a power boat.  As it was dragged thru the water it slowly twisted (or untwisted).  This was necessary in order to reduce excessive twisting once it was used on the tow.  We soon learned that 3,000 feet of wet one-inch manila rope was all that 2 men could move, to say nothing of lift. Tom Cantwell recruited some of his father's "crew" to help get the rope to the slope and strung out.   Fanny Cantwell always had a "crew" of winos, drifters, ex-cowboys and etc., men whom he, as a lawyer, had bailed out of trouble more than once and they were always willing to help Fanny.  One such character was an old red nosed merchant mariner, and with the help of a bottle of Old Grandad the "sailor" assisted Tom and I in making the very difficult long spice which was necessary to get the tow rope together with a minimum of swelling at the splice so that it would run somewhat smoothly over the wheels and pulleys.

This splicing was done,  as I recall, on a late Fall day with frost on the ground and snow flurries in the air.  Frigid fingers finally completed the splice and we helped the old sailor finish off the Old Grandad.   The splice worked beautifully and we were ready, the first ski tow in Saranac Lake, ready for the first snows.