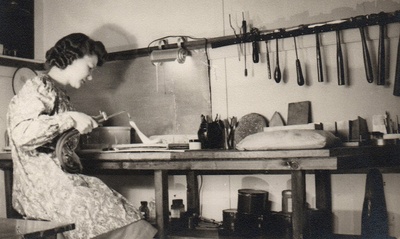 Betty in the workshop.
Courtesy of her daughter Theresa Brown.Born: 1915 in Brooklyn 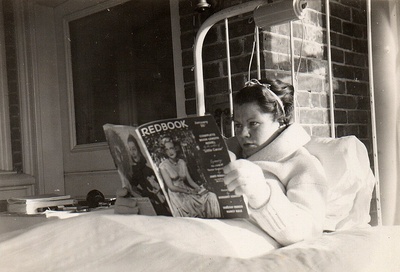 Betty curing with a magazine. Note the gloves.
Courtesy of her daughter Theresa Brown.Elizabeth Temming Koop, known as Betty, was cured of tuberculosis at the Trudeau Sanatorium, where she met and married Martin Koop in 1944. The couple worked together making hand-wrought jewelry and eventually opened the Temming Art Studio. After retiring from the jewelry business in 1971, Betty and her daughter Theresa owned and operated the Cinderella Shop in the Hotel Saranac until 1981. She moved from Saranac Lake in 1982 to live with her daughter in Malta. 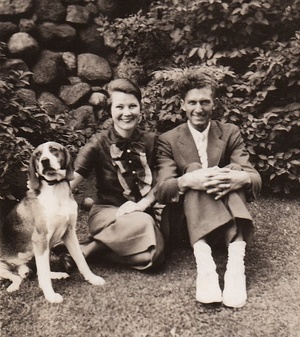 Betty and friend with dog.
Courtesy of her daughter Theresa Brown. 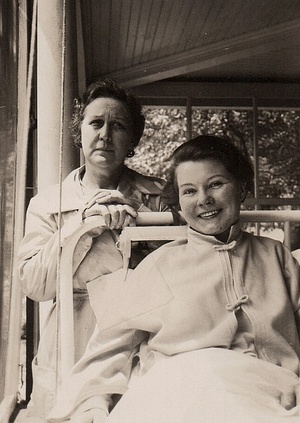 Betty on cure porch with nurse.
Courtesy of her daughter Theresa Brown. 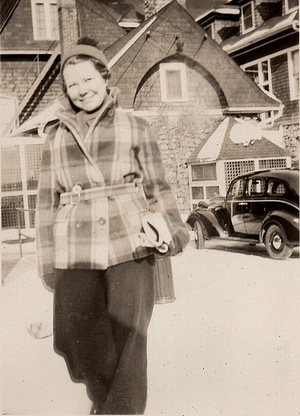 Betty, who had just picked up her mail, walking through the san.
Courtesy of Theresa Brown. 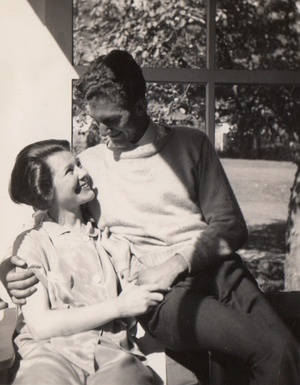 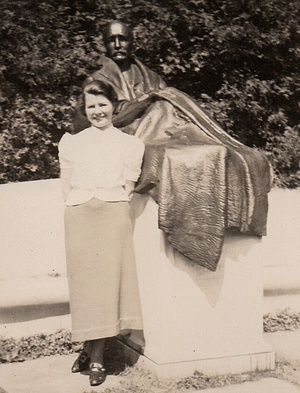 Betty with the Trudeau statue.
Courtesy of Theresa Brown. 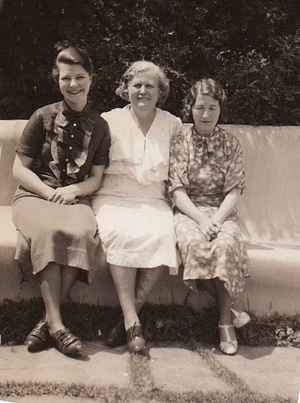 Betty and two others on the Trudeau statue bench.
Courtesy of Theresa Brown.

Betty was born in 1915 in Brooklyn. She was cured of tuberculosis at the Trudeau Sanatorium in Saranac Lake, where she met and married Martin Koop in 1944.

After retiring from the jewelry business in 1971. Betty and her daughter, Theresa; owned and operated the Cinderella Shop in the Hotel Saranac until 1981.  Betty moved from Saranac Lake in 1982 to live with her daughter.

She was predeceased by her husband in 1980.

Calling hours will be held from 5 to 7 p.m. Thursday, Jan; 12 at the Daly Funeral Home, 242 McClellan St., Schenectady. Funeral services Will be held, at 6 p.m. at the funeral home: Interment is private at the convenience of the family. Memorial contributions may be made to the Alzheimer's Association, 85 Watervliet Ave., Albany, NY 12206 or Ferncliff Nursing Home, 21 Ferncliff Drive, Rheinbeck, NY 12572.

Carla Stockton writes on Historic Saranac Lake's Facebook page:
"We arrived in Saranac Lake in the middle of a record-breaking cold snap in 1957, and we drove up Rockledge Road through a mid-night blizzard to the cold, cavernous castle that would be our first home there. We awoke the next morning to find ourselves snowed in. My mother, born and raised in Vienna and Zagreb, was delighted to find several pairs of old wooden skis in the cellar, and she took us out to the great sloping road to "teach" us how to use them. The perfect spot for starting each run was two houses below ours, a lovely kind of chalet, tucked back from the road. Mom commented that she felt, in a way, that she'd come home. Within minutes of her saying that, a couple emerged from that house, and they greeted us, asking us in accented English where we had moved from, would we like to come in and visit. They introduced themselves as the Koops, and seconds later, the three were conversing in German. From that moment, a warm friendship grew between Mom and Betty, a friendship born of mutual displacements and an appreciation for the resemblances between their beloved European Alps and the layered Adirondacks.