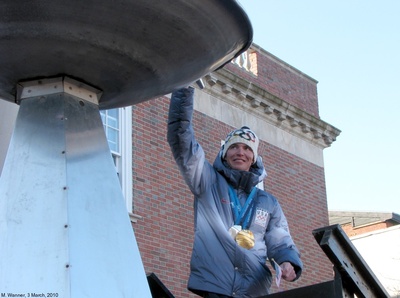 Bill Demong lights a replica of the 2010 Olympic flame in front of the Harrietstown Town Hall as part of a parade welcoming local Olympians, 5 March, 2010

Bill Demong is an American Nordic combined skier; in the 2010 Winter Olympics in Vancouver, he won a gold medal in the 10 km individual large hill, becoming the first American to win an Olympic gold medal in a Nordic event. He also skied the final lap in the team large hill 4x5 km relay for the United States team (Johnny Spillane, Todd Lodwick and Brett Camerota) winning the silver medal. He was named flag bearer for the American team at the closing ceremony. It was his fourth Winter Olympics.

A native of Vermontville, Demong attended Saranac Lake High School and graduated from the Northwood School in Lake Placid in 1997. He learned ski jumping through the New York Ski Educational Foundation. Competing on the world cup level since since 1997, Demong won his first World Cup gold in 2002 in the 10 km individual large hill, which he repeated in 2009. His athletic career was nearly ended by a swimming accident in 2002 that resulted in a fractured skull. He is the 2009 world Nordic combined champion.