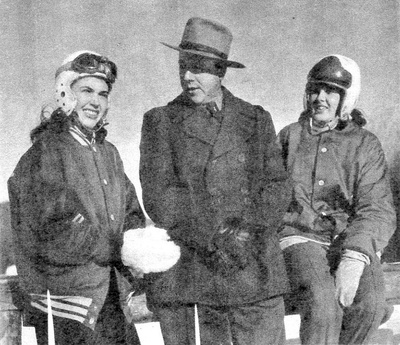 William (Bill) Petty was district forester of Saranac Inn for the NYS Conservation Department. Son of Ellsworth and Catherine Petty. Archie (Archibald) and Clarence Petty were his brothers.

"Bill Petty has served a remarkable career in service to the people of New York State. In his 54 years with the Department. Bill has become a legend for his unswerving dedication to wilderness areas of the Adirondacks," Commissioner Berle said.

Bill Petty joined the then Conservation Department in 1945 as a District Forest Ranger. He already had his B.S. in Forestry from Cornell and had served 10 years with the U.S. Forest Service. His career with the Department flourished and he progressed through increasingly responsible forestry positions.

In 1971, he was appointed Regional Director. For the past six years he has headed up Departmental operations in the eight-county Eastern Adirondack region. These are Clinton, Essex, Franklin, Fulton, Hamilton, Saratoga, Warren and Washington Counties.

Commissioner Berle presented Director Petty with a Department award for his outstanding service. The Commissioner also presented him with a letter of congratulations from Governor Hugh L. Carey. That letter stated, in part:

"You have dedicated your life to management and wise use of one of New York's greatest natural assets—the Adirondacks. The heritage that you leave behind will permit present and future generations to enjoy the wilderness experiences that you appreciated from your childhood and throughout your life."

Bill and his wife, Ruth, will vacation in Florida before returning to their home.

He graduated from the Saranac Lake High School and attended Cornell University, earning a bachelors degree in forestry.

Mr. Petty worked for the United States Forest Service from 1933 to 1943, when he began his service as a forest ranger with the Department of Environmental Conservation.

He was appointed district director of Lands and Forests in 1961.

He is survived by his wife, the former Ruth Roskelly of Lake Clear two daughters, Mrs. Marilyn P. Hughes of Rochester and Mrs. Joanne P. Manning of Saranac Lake; two brothers. Clarence A. of Canton and Archy C. of Homer; two grand-daughters; six nieces and nephews.

Calling hours are Wednesday from 7 to 9 p.m. at the Fortune Funeral Home in Saranac Lake. The funeral service is Thursday at 10 a. m. at the Funeral Home. Burial will follow in Lake View Cemetery in Tupper Lake. Memorial contributions can be made to the Adirondack Council, Boy Scouts of America.