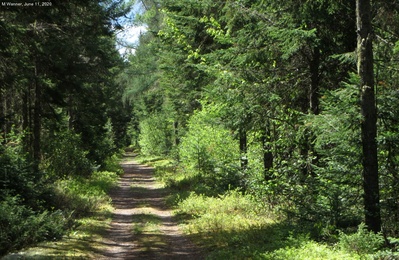 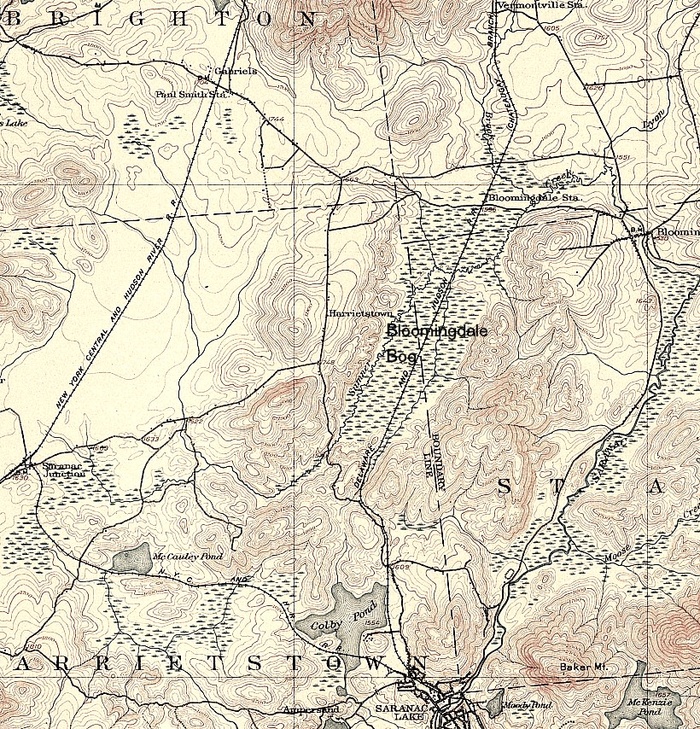 1904 USGS Saranac Quadrant, showing the Delaware and Hudson line crossing the bog.The Bloomingdale Bog is a peat wetland north of Saranac Lake and west of Bloomingdale that is roughly five miles long and a mile wide.  Before 1920 it was known as the Toof Marsh.

In the late 1880s, the Chateaugay Railroad was built along it when the road was extended from Loon Lake to Saranac Lake.  The line was later acquired by the Delaware and Hudson railway.  Passenger service was discontinued in the early 1930s.

A foot trail traverses the bog on the old railway bed, and in winter it is used by snowmobilers and skiers.

The engine “Goo Goo” has been sent to Lyon Mountain for repairs but Gov. Robinson has been reinforced by the Dannemora, to carry on the necessary work of filling up the railroad track across Toof marsh and other places where a little more work of the kind remains to be done. We are looking anxiously for the depot to be erected soon.

Beyond Vermontville the [Chateaugay rail] road strikes a straight line, and holds it for four miles, across what is known as the Toof Marsh, a swamp of a thousand acres or more, soundings of fourteen feet down into the muck or sand having been made with poles by the engineers. One of the natural curiosities is a ledge of rock which rises out of this swamp, and just beyond the only rock cut on the road between Standish and Saranac Lake is reached and that is a very small one. At Bloomingdale station two miles and a half beyond Vermontville and six miles and a half this side of Saranac Lake a station house for freight and temporary offices is nearly finished. From this point the distance is six miles to Paul Smith's and two miles to Bloomingdale and thirteen miles to Prospect House. South of this station the roads runs along the border of Colby Pond, a fine sheet of water a mile or more long with pleasant wooded shores.

The Firemen were called out twice on Saturday afternoon or early evening—once to a fire on Bloomingdale marsh near old Charcold [sic] Kilns ( formerly the Bloomingdale Railroad Station) and later on Roosevelt Street.

The bog, five miles long and a mile wide, is located on Route 192 between Bloomingdale and Gabriels and is one of the state's largest. It was used last fall as part of a conference for botanists studying mosses.

Explaining that bogs are wetland with high water tables, Dr. Kudish said they differ from swamps and marshes in that their floor is of peat. The peat moss grows upward each year, with last year's base becoming shaded out, eventually dying and compacting to form peat.

The extreme acidity of bogs prevents bacteria from forming and halts decomposition. Since bacteria cannot live with a pH of 4 in bogs, peat never decomposes nor decays Dr. Kudish said this inhibiting of bacterial growth makes peat an excellent substance for emergency packing of wounds.

Bogs are low in mineral nutrients and plants living in them must survive with few minerals, he told the group. These include the black spruce and tamarack trees and plants such as leatherleaf, labrador tea, bog goldenrod and laurel, sheep laurel and the closed gentian.

The nature walkers were especially interested in a large clump of dwarf mistletoe growing on a tamarack tree. Different from the southern mistletow used at Christmas, the plant causes the tamarack to grow abnormally.

Dr. Kudish demonstrated a Davis core sampler used by scientists to take peat samples. He said peat is a preservative and has enabled scientists to study pollen grains which have been preserved for thousands of years. From that study, they have been able to reconstruct past vegetation as far back as the end of the ice age.

Among its uses. Dr. Kudish said the substance is cut and dried for fuel in northern Europe and Asia, and, more recently, has become popular with plant nurseries as a packing for hanging baskets. Bog has great water retention, between five and eight times its weight. However, it has no fertilizer value, he added.

ELIZABETHTOWN - The High Peaks Chapter of the National Audubon Society will sponsor its annual "gorp and glogg" expedition Saturday, Feb. 9. All are invited to join with the birders on this half day hike through the flat, snow-covered Bloomingdale Bog. The group will meet at 10 a.m. on the road between Gabriels and Bloomingdale at a spot where the snowmobile trail crosses the highway. Skis or snowshoes will be used to hike the bog and participants should also bring a good supply of "gorp" (good old raisins and peanuts) for snacking plus a lunch and a cup. The club will provide the hot "glogg". Contact Tom Dudones in Saranac Lake for more information.