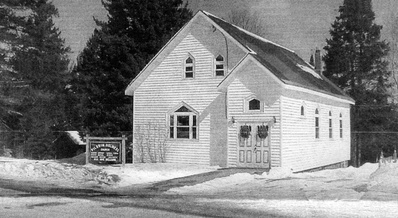 BLOOMINGDALE - The Bloomingdale Pilgrim Holiness Church originated in Vermontville. Started in 1931, services were held in the town hall and sometimes in the general store owned by Frank and Lillian Hough.

The Pilgrim Holiness District Council voted to locate the parish work to Bloomingdale in 1935. The group was given a lot that was the former site of the Catholic church, located next to their cemetery on Fletcher Farm Road. The Catholic church made arrangements for an exchange of land, which would enable them to expand their cemetery, in exchange for a lot on the Oregon Plains Road.

It was in this manner that the Pilgrim Holiness Church acquired their present site on June 15, 1936.

The months following the acquisition were a flurry of activity for members of the congregation. Under the leadership of the second pastor, Rev. George Lamb, a building formerly used as the Delaware and Hudson Railroad Line Bloomingdale Station, was purchased for $500. The building was cut in half, with each section being moved separately, from the site of the old train depot, located on the north side of Franklin County Route 55.

Although the exact date of the move is unknown and no pictures of the event have been located, according to church history information, as each building section was being moved, Carlton Abbott rode atop the structures singing "The ark is coming," during the two-mile trip.

The building was reassembled and remodeled making it a neat and attractive house of worship. The church was dedicated in February of 1937. On March 18, 1937 the church was incorporated as the Pilgrim Holiness Church of Bloomingdale, New York.

In August, 1937, the first funeral was conducted from the church — that of Mrs. George (Cecelia) Tellstone. In September 1937 the first wedding was held, uniting Arthur Shene and Hilda Johnson. The present pastor's wife, Nancy Shumway, is their first daughter born in the Oscar and Mary Shene home in Bloomingdale, in July 1938.

For quite a while a young people's newspaper, Pilgrim's Standard, was published monthly. The paper included such things as articles, testimonials and the like. The editor-in-chief was Arthur Shene, Hilda Johnson was managing editor, Janice Barton was circulation manager and Bernard Barton was the editor.

A capacity crowd was in attendance for the mortgage-burning ceremony held on a Sunday afternoon in 1944. The theme song was "Over The Top For Jesus."

This church is one of a group of 50 Pilgrim Holiness churches in the northeast.

"The Pilgrim Holiness Church teaches the inerrancy of the Scriptures, salvation for all including deliverance from all sin through the sacrifice of our Lord Jesus Christ," Rev. Shumway said.