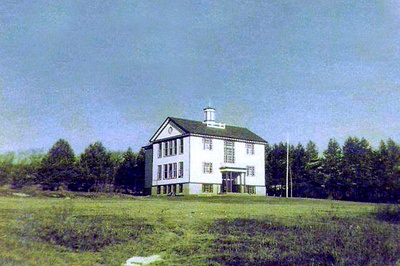 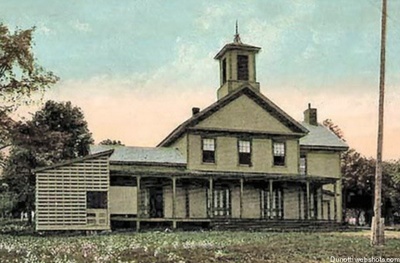 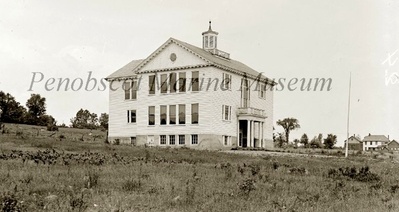 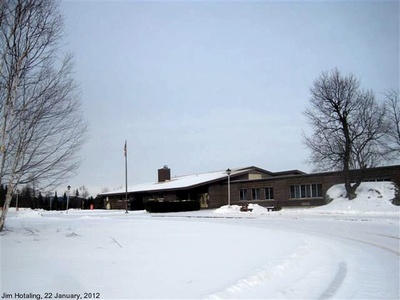 Other information: Bill Demong attended Bloomingdale School in the 1980s.

... We are to have a new School House and last Tuesday evening the committee met and received proposals for building the same. Mr. Levi Noble, being the lowest bidder, was the lucky man. Mr. Eugene Woodruff drew up the plans and specifications. It is to be a two story building...

The third piece, belonging to Thomas C. Norman, covers about 20 acres and is located in Bloomingdale just above the present school [emphasis added] on Johnson Road. . . .

Mr. Norman's option was also $500 with the land to be purchased for $7,500 to be used for the construction of an elementary school, from kindergarten through the Fourth Grade, for pupils from Bloomingdale, Vermontville, Gabriels, Paul Smith's and Onchiota. . . .

Mr. Clark has been an educator for 38 years and has served 21 of those years in his present post.

Dr. Frank Tanneberger of Westport, president of the district's Board of Cooperative Education Services (BOCES), confirmed the receipt of Clark's resignation. He added that the BOCES would meet at the Westport Central School on July 27 to decide what to do.

There has been some thought of combining the two districts with Mr. Clark's resignation. This action would have to be taken by the State Department of Education although the BOCES is inclined not to want to lose its identity.

As of September 1, Mr. Clark will receive his retirement pay. However, it is known that he has a number of plans for continued work in education, at least some of which would take him away from his home in Bloomingdale and even out of the state.

If the Lake Placid voters should decide to merge their schools with the Saranac Lake Central School District into one larger district, this might affect the State Department's decision or the continuation of Essex County District 2 as s separate unit.

The Plattsburgh Press-Republican this morning quotes Mr. Tanneberger as ascribing Mr. Clark's resignation to his "conflict with some of the federal school programs."

Tanneberger added, "I think the situation comes from his working with some of these programs that are against his personal beliefs. I think he finds it hard committing himself to these programs."

In conversation with The Enterprise late this morning. Mr. Clark confirmed this interpretation of his resignation but added that big differences were generally two in number:

<1> He believes that governmental assistance to non-public schools is "definitely unconstitutional and he cited the text book assistance as a case in point. In fact, he said he had resigned as of August 31 because the text book law goes into effect on September 1.

<2> He opposes federal aid to the schools of New York State and the restrictions such aid carries. Mr. Clark feels that the control of schools should be exclusively in the hands of the local community and the states.

He said some states might need federal aid but not New York State, and he added that New York schools would lose more than they gain.

Mr. Clark, speaking of his future work, said he had been offered several opportunities with the federal programs but he had rejected them because of his convictions.

Born in Luce, Minn., the son of a railroad foreman and he majored in history at Hamilton College in Clinton, New York where he received the bachelor of arts degree.

He taught mathematics, science and coached basketball at Bergon from 1928 to 1930 and then had his first principalship at Lafayette. In 1934 he received a masters degree, from Columbia University and then completed his course work at New York University.

In 1937 he became principal of the Bloomingdale school and was named district superintendent on January 1, 1939.

St Armand school district 4, at its annual meeting, voted to abandon Bloomingdale high school and to send its students to Saranac Lake high school from the seventh thru the 12th grades. The action was taken after discussion on the subject began many months ago. Similar action has been urged frequently during the past five years, but it was turned down by the voters on each occasion.

The students will be brought to Saranac Lake High school by buses.

Recently a friend of mine sent me a picture of Bloomingdale High School as it looked when I attended 75 years ago. There seemed to be some discrepancy in the caption next to the picture. The last graduating class from BHS was in 1939, when 11 of us received our diplomas at a ceremony held in the local town hall. Our class consisted of four girls and 11 boys: Annie Hewitt (Converse) and Geraldine LaGoy (Joyce), the two surviving alumni, and Pauline Weston, Harriet Stephenson (Limbert), Charles Reick, Donald Hayes, Elmer Brewster, John Brewster, Jack Hewitt, Billy Hewitt and John Arthur Sprague. How fortunate we were to grow up in a small, friendly town nestled in beautiful Adirondack mountains.