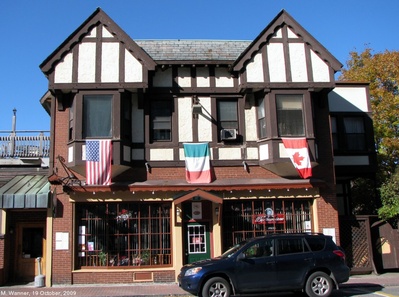 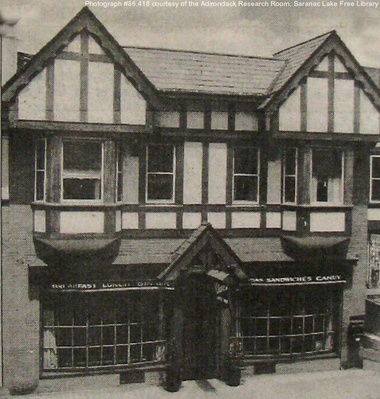 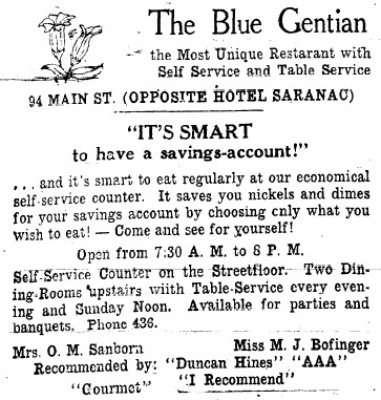 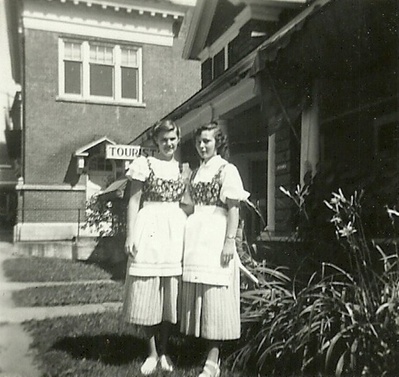 Patty Wallace Whitelaw, on the left, ready to wait on tables. She worked there starting in Sarasota and also in Saranac Lake for many years. Here the waitresses stand in front of the Branch Cottage at 97 Broadway, with the firehouse in the background. Image courtesy of her daughter. 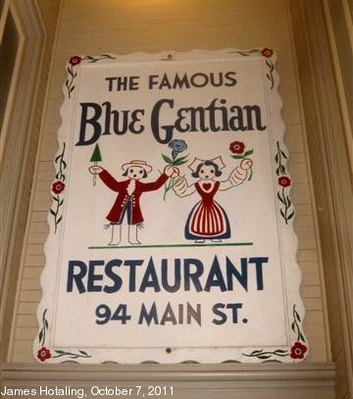 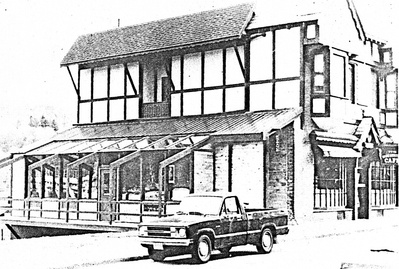 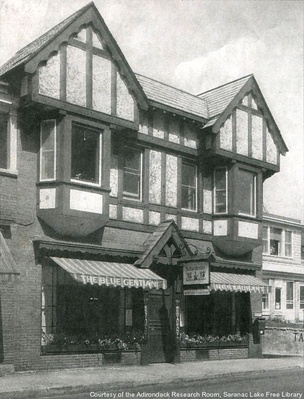 Blue Gentian, undated. The right-hand side was built first, between 1908 and 1916, with a second, similar building inserted next to the Berkeley Hotel by 1922. Adirondack Daily Enterprise The Blue Gentian tea room was at 94 Main Street, across the street from the Hotel Saranac. It opened in 1938, and was operated for many years by Mrs. O.M. Sanborn and Miss Meta J. Bofinger. The building was originally a masonry addition to the Berkeley Hotel which managed to survive the fire in the late 1970s that destroyed the hotel. A remodeling designed by architect Arthur Wareham gave the addition its distinctive Blue Gentian facade.

The two women who originally opened the Blue Gentian lived in or near Sarasota, Florida, in the winter season and operated an establishment with the same name there. It seems to have had an identical menu. The Florida restaurant operated from 1941 to 1955.

Elizabeth C. Fletcher was a cook at the Blue Gentian for 25 years.

Ruth Sporck Levy, daughter of patient Christian Sporck, had a job waiting tables at the Blue Gentian while on summer break from Cornell in the 1950s. She recalls that the two sisters were demanding employers, and that Mrs. Bofinger was the more formidable of the two. She writes "I recall she remarked that I needed to use more elbow grease in cleaning a table. The restaurant was famous for its sour cream raisin pie."

O. M. Sanborn, original co-owner of The Blue Gentian passed away in Sarasota, Florida on March 13, 1971.

The Blue Gentian was purchased by Dr. Marilyn Nelson and her husband Ken Prickett just before the 1980 Winter Olympics. Marilyn and Ken were working as missionaries for The Baptist Home Mission Board, and were asked to move to Lake Placid, where they coordinated the Baptist’s ministries to the winter Olympics. 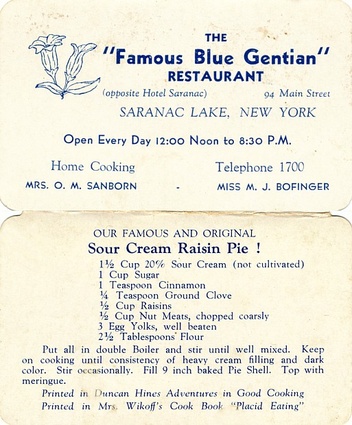 Table card, c. 1945. Courtesy of Marc MoschetteDuring this tenure, the restaurant also served as the "Blue Gentian Gallery," showing artwork by cartoonist C. Tyler and others. In 1942 (and subsequently re-printed in 2002) The Blue Gentian's famous Sour Cream Raisin Pie recipe was published (recipe #628) in "Adventures in Good Cooking and the Art of Carving in the Home" by Louis B. Hatchett, Jr., Duncan Hines, and Louis Hatchett. In the 1920 guidebook, "Adirondack Guide : vacationland in picture, story and history," The Blue Gentian is mentioned at 94 Main Street, Phone 436, "recommended in 'Adventures in Good Eating' by Duncan Hines."

Amy Jones daughter, Lucy Jones Berk, writes, "I remember the tearoom well. It was a very special treat for a youngster to go there with a parent and often out of town guests."

Other people who worked at the Blue Gentian include Katherine LaPan Kilpatrick, Marlene Duprey Hyde, and Steve and Vicky Yell. 1

A new tearoom and restaurant has been opened in Saranac Lake in space formerly occupied by Chance's opposite the Hotel Saranac.

Operated by Mrs. O. M. Sanborn and Miss M. J. Bofinger, who are experienced thru conducting tea rooms abroad, the Blue Gentian tea room will cater to patrons for breakfast, luncheon, tea and dinner. The management is holding to a policy of quiet atmosphere and home cooking and includes unique dishes and beverages on the menu.

"Miss Bo" is back again and that's good news to Saranac Lake who missed her wonderful cooking last year when the Blue Gentian Restaurant on Main St, was not opened.

But it's "business at the same old stand" now, where Miss M.J. Bofinger and her co-partner, Mrs. O.P. Sanborn, have re-opened the bright and cheery restaurant festive with new window boxes.

"Miss Bo," who has personally done all the home cooking for the past twelve years, also prepares special meals for people on diets.

She and Mrs. Sanborn also operate a Blue Gentian restaurant in Siesta Key; Fla., and for several seasons both places have been recommended by Duncan Hines, and other adventurers in good eating.

Mrs. Sanborn will have charge of the dining room, and once again, as in past seasons, Mrs. E.M. White will be assistant hostess.

From November 1985 through late 1986 the space was occupied by Brady's Restaurant owned and operated by Matthew Davis, who also planned to build a bank on the former site of the Berkeley Hotel, and a twin movie theater on the site of the old Pontiac Theatre, over a parking area.

In June 1987, a business named Leahy's Palladium, managed by Steve Leahy, opened in the space, providing "...a new type of night club and entertainment center for the Adirondacks. Dance in the Palladium, remodeled in contemporary decor, with new sound system and overhead track lights, complete with bandstand and comedy stage..."  It closed in December 1987, and reopened as the Berkely Club.  It later became the Pontiac Club, operated by John and Buffy Van Anden. Other restaurants in the space included, in the 1990s and 2000s, Bella Roma and Corvo.

In 2011, the Community Store opened in the space.

2010-03-09 01:22:21   I worked for many years in the restaurant in Sarasota, FL that was originally the Blue Gentian at 410 Beach Rd Siesta Key, Sarasota, FL. It became the INN BETWEEN and then the Beach Cafe and was operated by two Spaniards Manolo Cancho and Miguel Romano for over 30 years. I have gone on to a 20 yr career in the business and that remains the best restaurant I ever worked at run by two classic, very talented restauranteurs of the old school. The best teachers I ever had, their was a picture of the original BG in the office and I always wondered about it, just crossed my mind for the first time in 10+ years and thanks to google just learned something neat. THANK YOU —24.35.111.186