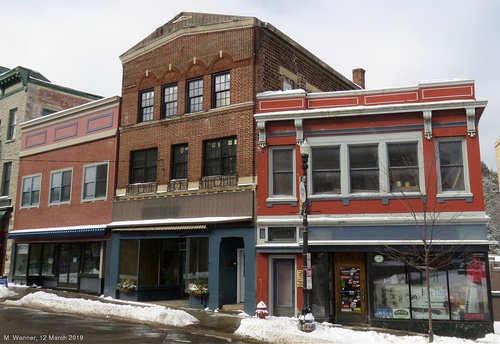 Blue Line occupies the Kendall Building, at left, and the Jack Block, at right, but not the Mulflur Building in the middle.  The two buildings connect behind the Mulflur. 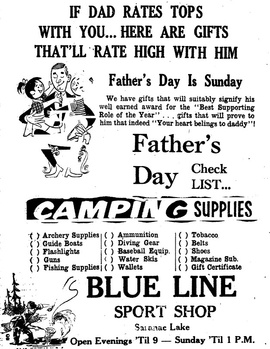 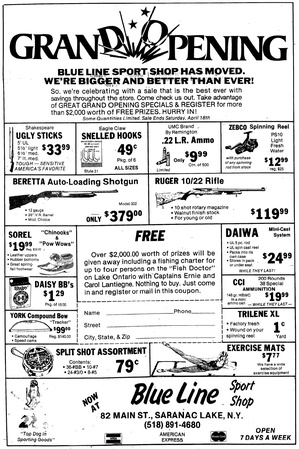 Saranac Lake expects to show off a brand new sports shop along its main line wailing wall on March 29. A new store is always newsy. The name of the upstart, is The Blue Line Sport Shop or something on that order. For awhile we thought the name was ill chosen since we connected it with the famous Blue line Bus service.

Actually it is derived from the Adirondack Blue Line which is an extremely important boundary for an area which comes inside the "forever wild" preserve. The Blue Line is therefore a good name for the sports shop.

Cheeseman's originally occupied the same spot so summer shoppers who are in the habit of seeing a sport store in that location will find the identical type establishment right on the old location.

A motion made by Trustee Skeels authorized the Village Clerk to apply to the State Conservation Department for designation as an issuing office for hunting and fishing licenses.

In past weeks the owners of the Blue Line Sport Shop have repeatedly requested the Board to take this action so they might in turn be deputized by the clerk to write licenses.

At present there are two places other than the Town Clerk's Office to obtain a license, the Saranac Lake Hardware and Four Seasons Sport Shop. The Town Clerk is authorized to deputize only two outside office.

Howard Ellithorpe, co-owner of the Blue Line last night showed the Board a list of names and addresses of people coming to the store for licenses when all other issuing offices were closed. The deputies such as the sport shops or hardware stores make no money writing licenses but it is done as a customer service