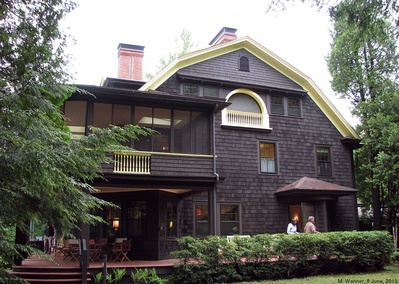 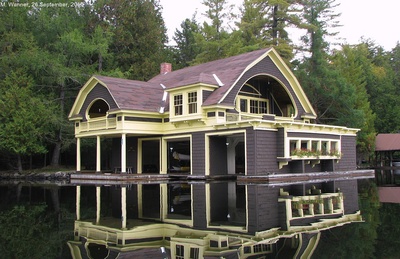 Blythmere was the camp of the R. D. Douglass family on Douglass Point on the southeast shore of Upper Saranac Lake.

It was later owned by Major Ennalls Waggaman, of Waggaman and Collyer, Glens Falls contractors.  The camp was later subdivided by Emerson D. Wertz, a Miami, Florida real estate man.  The original house and boathouse along with 24.5 acres were bought by John J. and Mary M. Watson, of Lake Placid.

R. D. Douglass, of New York, is having a new camp, boat house, power house and steamer dock built on the Upper Saranac. The boat house will probably be the finest on the lake, the lower part containing launch slips and boat racks, with the second story a billiard room. 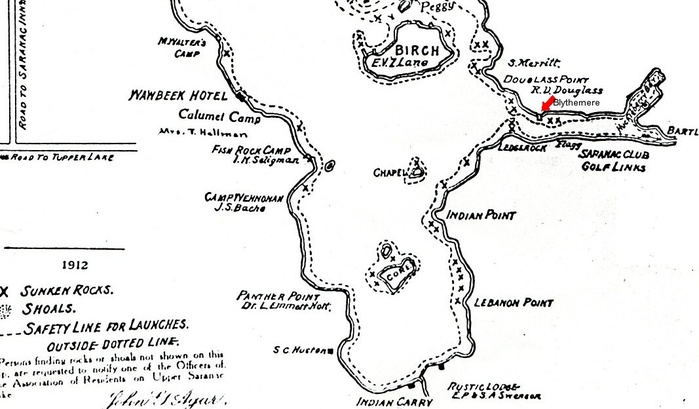 Blythemere is at upper right on this 1912 map of southern Upper Saranac LakeNew York Times, July 3, 1904

…Robert Dunn Douglass of New York has had several pagodas built along the shore at his camp...

Robert Dunn Douglas of New York, who last season built a new camp on the Upper Saranac Lake, near the Saranac Club, where he made many more improvements this Spring, including the erection of a handsome boathouse, arrived in camp this week. At the Douglas camp are also Miss Frieda Hess, the Misses Douglas, and Miss Julia Nellson of Orange, N. J.

In times past, one of the most desirable jobs, especially during the Depression years, was that of camp caretaker. The salary was good and the security was hard to beat.

Generally speaking, there existed two types among the local men who served in this capacity. In the one instance, a caretaker was a man of many talents — a guide, a carpenter, a plumber, an electrician, a gardener, a sort of Jack-of-all-trades and, frequently, a cheerful companion. Type two was more of a superintendent who had a larger estate to manage and who hired others to perform various tasks related to the camp operations. In either case, the caretaker was usually provided with living quarters on the grounds and the household expenses were paid by the owner. Some of the more wealthy patrons even financed college educations for their caretakers' children.

In addition to these general categories, there existed a situation whereby the owner and the caretaker became "family." One such arrangement occurred when Alix W. Stanley purchased the Waggaman Camp at the southern end of Upper Saranac Lake, and chose to keep the existing caretakers, Fred and Mildred Derby. The camp was originally built by R. D. Douglass in 1900 who, at that time, was president of Dunn and Bradstreet. Stanley was also nationally known, as the owner of the prestigious Stanley Tool Co. of New Britain, Conn.

Upper Saranac Lake, during the first half of the twentieth century, could boast of a plethora of summer camps occupied by well known millionaires from the world of finance and industry. In Stanley's neighborhood of the lower half of the lake there were such names as Jules Bache of Camp Wenonah, Isaac Seligman at Fish Rock, Otto Kahn at Bull Point, Adolph Lewisohn on Prospect Point, John Agar on Gull Point and the Loeb family at Gull Bay. The Swenson brothers held forth both at Bungalow Bay and Rustic Lodge on the Indian Carry. The remaining balance of the lake could supply enough names to fill a chapter in the "Blue Book."

The coming together of Stanley and the Derbys was a favorable and mutually beneficial arrangement. A cordial relationship was established which grew into a kinship among the three, lasting until Mr. Stanley's death in 1954. Fred served as guide, fellow fisherman and sailboat crew, as well as caretaker, while Mildred filled the post of chauffeur in the Oldsmobiles and Buicks which Stanley favored. She would drive him to his home in New Britain or to his apartment in New York City with complete confidence. Mrs. Derby tells how Stanley had a favorite flannel bathrobe which he constantly wore around the house. During a stay at his Connecticut home he was wearing the somewhat shabby garment and suddenly decided he wanted Mildred to drive him into town. His housekeeper was horrified but he ignored her protests and said to Mrs. Derby, "I gave $10,000 to the hospital, $10,000 to the Boy Scouts, and $10,000 to the church and I want to see how they are spending the money." She drove him in the Oldsmobile but he did not have to leave the automobile in his inspection tour so the bathrobe went unobserved.

Stanley greatly enjoyed visiting the area lumber camps and took special pleasure in dining in the camp kitchens where the common foods were to his liking. He never carried any money on his person and each time upon leaving the camp he would say to Fred, "Give the cook a couple dollars and see if he will let us have a loaf of that bread.

He had simple tastes in other matters as well. Back when I was with the Paul Smith Electric Co. we had to replace the submarine cable which fed the Stanley Camp from across the lake at Panther Point. I was sent to arrange the necessary power outage with Mr. Stanley and met Fred at the boathouse. He took me to meet Stanley who was seated on the stone wall cleaning a mess of perch! Later I told Red that I was amazed to see a millionaire cleaning perch, but he assured me that his boss was very down to earth and that one of his favorite meals was fried perch. He not only enjoyed eating them but also thought catching them was great sport. Fishing took second place to sailing, however, which was his first love and he spent many happy hours out on the lake in his sailboat.

Fred had a pair of dogs that were his constant companions and rode in the back seat of his car. One day, Stanley said, "Fred you need a better vehicle for those dogs, come with me." They drove into Saranac Lake where Stanley presented Fred with a brand new Jeep. Later, the three drove the Jeep as far as Lake Tear of the Clouds in Mt. Marcy County along a lumber road when Finch-Pruyn was cutting in that area. It's hard to believe today that such a remote spot could be reached by even a four-wheel drive vehicle. The current membership of the Adirondack Mountain Club would shudder in unison at such an invasion of their inviolate territory. It must be remembered, however, that this trip took place prior to the state's acquisition of the High Peaks. Logs were being cut and hauled to the headwaters of the Hudson River under the very shadow of Mt. Marcy and were driven downstream to the Big Mill at Glens Falls. No doubt but that Stanley enjoyed one of his favorite meals and got a loaf of bread at one of the logging camps en route.

Among the local caretakers there were not many who enjoyed such a companionship with their camp owners as did the Derbys. Stanley fully experienced a way of life with his caretakers, not treating them as subservient in any way, but rather as akin to his own family. Together they fished, sailed, climbed mountains and traveled extensively. A mutual respect was a natural bond to their employer-employee relationship.

On the east shore of the lake, there was a certain degree of isolation and privacy in those days, unlike the west shore where a state road traversed the entire length of Upper Saranac. To reach the Stanley Camp it was necessary to travel along a narrow gravel road from Bartlett's Carry to the turn off into the camp driveway. Two cars could not pass in this lane and, when meeting a car from the opposite direction, one driver would have to acquiesce to the other and back up for a considerable distance in order to reach a turnout. From this road there remained another three quarters of a mile to maneuver along the camp entrance road. Beyond the Stanley turnoff the gravel road continued for another two miles to a dead end at Birch Point at the southern end of the narrows. Beyond this point, camps on the west shore had to be reached by boat with one exception. An old road existed that led in from the Forest Home Road, skirting the Black Pond Swamp to Markham Point. This is a private road today. Its entire right-of-way crosses state land, but it was built prior to the state's ownership.

Much of this situation has drastically changed since Stanley's death in 1954. After his passing, the camp was purchased by Emerson Wertz and the property was subdivided into many smaller parcels which were quickly sold to eager aspirants who built smaller camps. This trend was duplicated along the east shore where many of the large camp holdings were broken into subdivisions. The gravel road was improved and extended northward to Pork Bay to serve the many new camp owners along the way.

Fred and Mildred Derby stayed on with Mr. Wertz for two years before retiring. Many good caretaker jobs remain in our area today but few, perhaps, that are close to the type of relationship and camradarie enjoyed by the Stanley-Derby trio.

Unfortunately, all good things must eventually come to an end. In 1967, 13 years after Alix Stanley died, Fred Derby passed away. Today Mrs. Derby lives in her apartment at Dechantal surrounded by memorabilia of her days as a co-caretaker on Upper Saranac Lake. Next year she will reach the age of 84. Her mind is sharp, and she easily reminisces about the days that she and Fred spent with Stanley at camp, in New Britain and New York City. She handles her present health adversities as easily as she steered the Oldsmobile through 42nd Street traffic, with never a single qualm.

Tragedy marred Memorial Day for Mr. and Mrs. Frederick Derby of Upper Saranac Lake when their only child, three-year-old Frederick William Derby Jr., toppled into the lake and was drowned.

The mishap occurred about 2 p.m. Tuesday at the Major Ennals Waggaman camp on Upper Saranac where Mr. Derby is caretaker. The child had been playing in a sand box in the back yard, strayed away and was gone about ten minutes before its absence was noticed. Hasty search by his parents disclosed the baby's body lying in about three feet of water near the camp.

Drs. Carter and Rita Morse of Tupper Lake were summoned by phone and the pulmotor of the Tupper Lake Fire department was rushed to the Wawbeek public dock, five miles away, within five minutes by Driver Bob Brown and George H. DeLair. Meanwhile Mr. and Mrs. Derby had to carry the child from Waggaman's camp to the Wawbeek dock by boat, a 25 minute trip.

The pulmotor was used for about 20 minutes without success, the child having been dead before help could reach it.

Funeral service will be held at Saranac.

...A while back we visited Saranac Shores, the Emerson D. Wertz development on Upper Saranac Lake. He has 32 large wooded lots there, and has sold several of them- That surely is one .of the most beautiful lakes in the area, and we feel reasonably sure that in the years to come, what with the increased travel to this area from the west, that many more people will make their summer homes here...