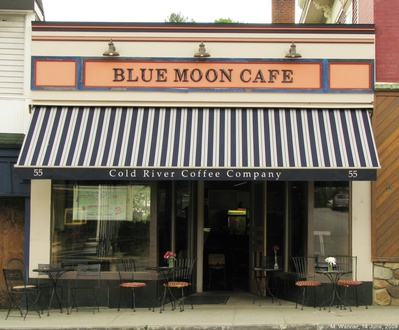 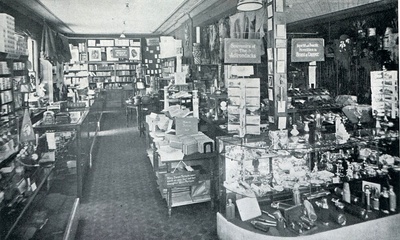 The Book Store interior, c. 1909 (From Saranac Lake in the Adirondacks: The North Woods City of Health and Opportunity, Mid Winter Carnival, 1909) 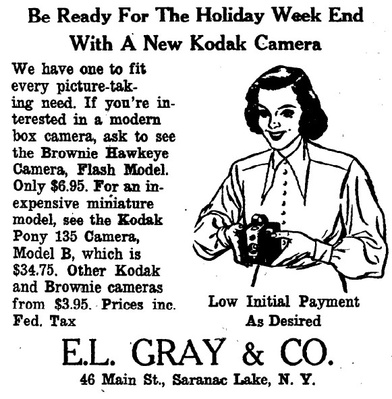 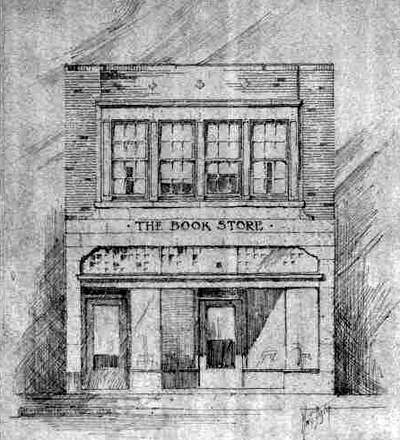 An architect's rendering of a two-story version of
The  Book Store. undated.  Perhaps a second floor was planned.  This might explain why the building's door is off-center.
Courtesy of the Adirondack Experience.
In April, 1921, Clinton J. Ayres, who was in the real estate business, bought the land on which 48-50 Main Street stands. The purchase was made from the Miller Estate, and included the narrow strip between that building and the Miller Store, then a vacant lot. Six months later, Ayres resold the property to John Ridenour, publisher of the Adirondack Enterprise, who made the purchase for investment purposes. Ridenour, in turn, sold the developed part of this land to Walter Sagendorf in June, 1922, but retained the vacant portion until June, 1925, when it was purchased by Earl Lenier Gray. (For more information on Ridenour and Sagendorf, see the discussions of the Fowler Block and the Blue Gentian, respectively.)

Here, Gray built the building now bearing the address 46 Main, to a design by William G. Distin, Sr., and opened a shop selling books, school supplies, "tasteful" souvenirs, art supplies, and fishing equipment. His brother, Bertrand H. *Gray, (who with E. B. Hay owned the Adirondack Art Company) was an avid sportsman. Though the two brothers were very different in temperament and were not business partners, "Ber" Gray did have an influence on Earl to the extent that they designed and manufactured a fishing lure that they sold at the store (they were made in the basement on a die-stamping machine purchased for that purpose).

While Ber Gray was the sportsman, E. L. Gray (no one remembers him being called "Earl") was the "gentleman". He always comported himself as such and conducted his business in a gentlemanly manner — selling nothing cheap or gaudy and running the store everyday dressed in a three-piece suit.

Occasionally, his strictness about business matters caused problems. Gray had the contract with the local school district to supply textbooks. He would invariably order precisely as many as he was told would be needed, and he almost as invariably would run short Years after he retired and the business was owned by Bill Harvey, Gray advised the younger man, "Don't get involved with textbooks."

In December, 1955, Gray sold "The Bookstore" to Donald R. Moreau who, five years later, sold the business to William L. Harvey, Jr. but retained ownership of the building.

E. L. Gray died in the early 1960s. He was pre-deceased by his wife, Beatrice Gray. He had no children, so most of his estate went to a distant cousin. He did, however, leave $30,000 to the Saranac Lake Free Library — a most appropriate gift from a bookstore proprietor.

The body of the Book Store building is steel-frame and brick. Because of the slope from Main Street to the river, it is one story high at the front and two stories at the rear. The rear windows are steel-frame casement.

This very narrow, very deep building has a concrete facing that reflects in its outline the curves of the Second Empire structures that are its neighbors. The storefront is quiet and dignified and has an exceptionally deep, trapezoidal entry. The display windows are bronze-trimmed and rest upon a black granite base. In a slightly recessed panel above a series of transom lights above the storefront, the words "THE BOOK STORE" are written in slender, bronze letters.

On the concrete facing to either side of the display windows, there were once two bronze plaques. Each bore the name "GRAY'S".

The life and times of the Gray brothers of Saranac Lake

In those two decades which immediately straddled the turn of the century in Saranac Lake, Main Street was enjoying an architectural face lifting. Many of the older buildings were being replaced by more permanent structures. A new bank was under construction to house the Adirondack National Bank and a new school had been dedicated by President Harrison. Just two doors away from the bank the Haase Block's brick edifice rose to three stories and all along both sides of Main Street new facades were appearing.

John Harding, who owned the Algonquin Hotel on Lower Saranac Lake, decided to get in on the action. Next door to the high school, on the corner of Main and Academy Streets, he erected the Harding Block and the first floor was soon occupied by a sports store specializing in fishing equipment Joining the owner in this new venture was E. L. Gray, better known as "Lee," and the firm was established as Harding & Gray. One of their early advertisements which appeared in a 1905 magazine boasted:

That's the kind we carry.

Apparently Harding lost interest and decided to concentrate on the Algonquin Hotel, for in the following year the ad was changed to "E.L. Gray & Co., successors to Harding & Gray." The "& Co." referred to Lee's brother Bertrand, who also became better known as "Ber." The brothers added to their merchandise such items as stationery, souvenirs, and novelties, and finally books.

As a pair the two were not at all similar in manner, speech, or attire. Lee always wore a business suit with white shirt and tie, while Ber favored rough tweeds, belt-in-the-back jackets, knickers, coarse wool stockings, and high-top shoes. Lee was fastidious in his appearance and spoke in a clipped, brusque, almost imperial tone giving the impression that he was strongly biased, especially in regard to trout lures.

In their personal activities they also differentiated quite widely. Lee put forth a rather delicate and quiet manner, reserved, impeccable, and content to remain behind the counter. Ber was more extroverted and an avid outdoorsman who enjoyed camping and fishing. He was a self-acclaimed expert on lake trout and devised his own tackle which he sold at the store along with his homemade fly repellant that smelled strongly of tar and citronella.

The two men were born in Saranac Lake and their parents were prominent pioneers. The father, Charles Gray, came from Crown Point in 1873 and met Phebe Washer who had arrived one year earlier from Plattsburgh. They were married in 1875 and in the following year Charles built the Berkeley Hotel. One of the first guests at the Berkeley was the Rev. Dr. John Patterson Lundy, who held Episcopal services at the hotel. This led to the formation of St. Luke's Church with Mrs. Gray being a charter member of the Ladies' Guild of St. Luke's, together with Mrs. E. L. Trudeau, Mrs. Calista O'Brien, Mrs. Ida Reynolds, and others. The Grays named their two sons Earl Lee Gray and Bertrand H. Gray but, as mentioned earlier, the boys were always known locally as Lee and Ber.

Eventually the pair moved from the Harding Block to a new store at 46 Main Street (presently housing the Yum Yum Tree and the Gift Corner)1 and christened the venture simply Gray's Book Store. With a more decided emphasis on books and photographic equipment the smaller establishment was an immediate success and became a popular shopping center for the many tubercular patients arriving in the village, the local residents, and sportsmen alike. Obviously Lee handled the book business while Ber held forth in the Izaak Walton department. Ernest Sheldon was added to the staff to head up the photographic department and the store did not lack for customers.

Lee's one interest, aside from the business, was centered on his motor launch, the "Let-er-go" and he became an active member of the Saranac Boat and Waterways Club. He raced his boat in the Class C events during summer regattas on Lower Saranac Lake with some success and along with this diversion, he became friendly with Charles Harris, a well-known summer camper on the lake and an avid boater. The two men enjoyed an amiable rivalry in the regattas and carried on a correspondence in the off season.

In September of 1922 Harris wrote, to Lee: "I am looking at an airplane motor which costs $12,000 and, if I can get it, will not take your wash next season. All it needs is a boat to put around it." It would seem that Lee had beat him earlier that summer.

Both men were strong supporters of the Boat and Waterways Club and both held offices in the organization. After Harris had returned to New York City he had been informed by Harold Thomas that the water level at the Lower Lake had dropped alarmingly. He immediately wrote to Lee telling him to "get a hold of Clint Ayres to check up on the lock tender before I go to Albany and have it out with someone!"

Ber was also a boat owner but not as an entry in the racing fraternity; in fact, according to the membership listing, he was not a Boat and Waterway Club member. His boat was in the fishing class, slow-moving and quiet in operation. It was a narrow launch, pointed at bow and stem like a guide boat. It measured 22 feet long and sported a two-cylinder engine which made for leisurely cruising. Ber named it "Scout"

Two display windows, on either side of the entrance to the book store, always drew considerable attention and the items to be viewed could vary from best sellers to wildlife specimens. One large lake trout or a fine catch of brook trout could be found reclining on a bed of ice, or a stuffed red fox might be eyeing a stuffed grouse. On one occasion the word went out that the grandfather of all bull frogs was ensconced alive and happy in the left window. Every boy in the village rushed to view the monster which, according to rumor, weighed in at five pounds. No one was disappointed!

Camera equipment and photo displays were arranged by Ernest Sheldon and, should a remarkable scenic view come in for development, it would be enlarged to serve as an attractive backdrop for such related items as binoculars, fly reels, landing nets, or an arrangement of the famous Gray-Herendeen trolling spoons. During Winter Carnival time, related photos of the Ice Palace and colorful parade floats would be both on exhibit and on sale. Customers and/or just plain window shoppers would gather between the twin windows to comment on the quality of the items being offered.

Gray's Book Store remained a village institution as a familiar Main Street fixture for many years but, unfortunately, the brothers had a falling-out and went their separate ways. Lee lived at 20 Front Street and Ber dwelt at 8 McCarthy Terrace. Ber also took up residence at various camps at Lincoln Brook near Franklin Falls, at Moose Pond, and finally at Deer River Flow.

In between Gray's and the Yum Yum Tree, the little shop at 46 Main Street became Moreau's Book Store. Other changes along Main Street have taken place over the years and continue to alter both sides of our best-known thoroughfare. Among the missing names that were familiar at a former time are such unforgettable firms as Walton & Tousley, Goldsmith's, the Linwood Cottage, Pasho's Barber Shop, Woolworth's, Leonard's, Kendall's, Carey's, and more recently, Charlie Green's. Of course there have been many more, and elderly village residents might each have a nostalgic favorite when reminiscing about the past.

For those of us who were young boys at the time, it will always be the giant frog in the window of Gray's Book Store,