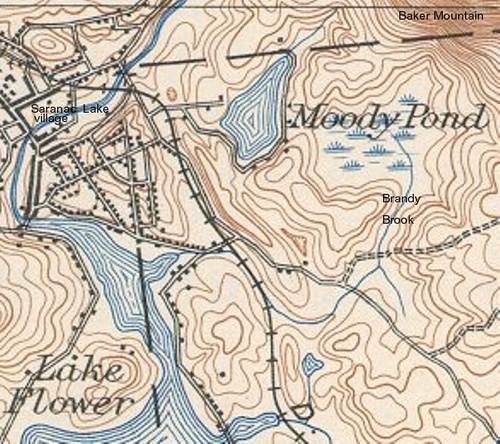 Detail from the 1904 USGS map of Saranac Lake and the Brandy Brook.
The gas plant was built about six years after this map was made, at about the point where the brook joins the railroad right-of-way.Brandy Brook is a roughly one-mile long brook that runs from Moody Pond to Pontiac Bay in Lake Flower. It parallels Brandy Brook Avenue.   Along the way it passes the site of the Saranac Lake Gas Company coal gasification plant off of Payeville Lane; waste from the gas production fouled the brook and the bay.  It was declared a Superfund Site in 2016, and a cleanup process was begun in 2018.

Note: There are several "Brandy Brooks" in the Adirondacks.