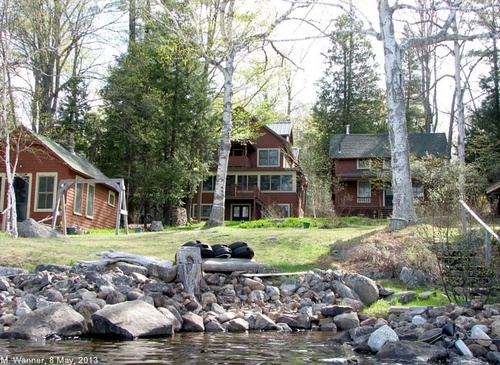 Breezy Point, 2013. The "Shore Cabin" is at left. In 1958, Frank D. Leamer bought the Fred W. Rice camp on Lower Saranac Lake, then known as "The Birches," at public auction. Leamer, the personnel director of the Bell Telephone Laboratories in New Jersey had camped for many years on Bluff Island at Joe Harley's camp, and had recently purchased a lot at Pinehurst next to Harley's Hemlock Hill; after winning the Birches auction, they sold the Pinehurst lot and moved to the Birches, which they renamed Breezy Point. The buildings, dark green at the time of the sale, were later painted brown. The sale included all the contents of the houses.

Frank and Mildred spent many happy summers at the camp, and celebrated their fiftieth and sixtieth wedding anniversaries there. Frank died in 1991 and Mildred in 2003, and the property is now enjoyed by Dick and Bobbie Leamer and their children and grandchildren. In 2003, the Leamers tore down the "big house," built by previous owner Grant G. Hoag, and built a new house, designed by architect Barry Halperin to look like the old house. Fred W. Rice's home, called "The Homestead," was reinforced with steel beams; the "Shore Cabin," that the Rice boys slept in for many years, is still in use. The 1920s boat house has been reinforced and is still used. 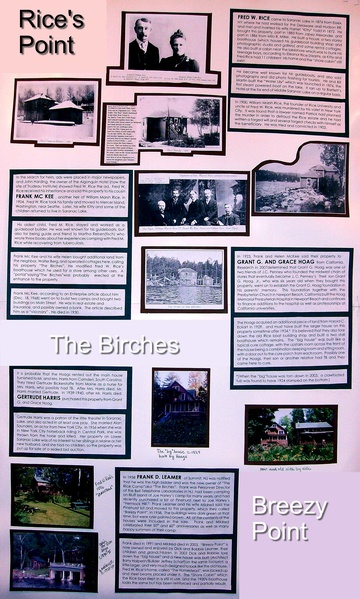 Rice's Point Display, by Bobbie Leamer, Shown at History Day 2008. Click on the image to enlarge the display