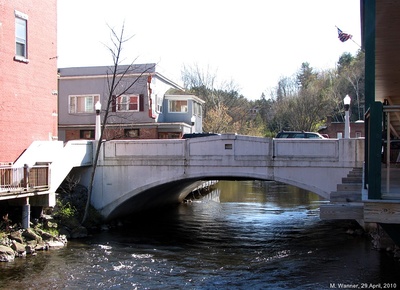 Old Address: Between 36 and 39 Broadway

Other information: Text on undated plaque, on the left hand side going up toward Berkeley Hill: Town of Harrietstown, Town Board A. I. Vosburgh - Supervisor; H. Ray Williams - Town Clerk; Jennie A. Flagg - Deputy Town Clerk; Eugene Keet, Seaver A. Miller, Charles J. Stickney, Allen I. Vosburgh - Justices of the Peace.

Construction of a new concrete bridge across the Saranac River at Broadway began on Wednesday. The contractors are Miller & Meagher;they expect to rush it through to completion in forty days.

Funds for the job were voted by the taxpayers of the town of Harrietstown last spring, at which time it was decided to float a bond issue of $15,006 for the work. There were several bidders and Miller & Meagher, whose bid was lowest, were awarded the contract for $13,358.

While construction is going on vehicles will detour by way of Woodruff St. A footbridge extending from Flint's to the rear of Larry's Lunch will be erected by the town to accommodate pedestrians. From twenty to twenty-five men will be employed on the job. The contract calls for brick pavement on the bridge to correspond with the pavement leading to the approaches.The pavement work will be done in the fall and a gravel surface will be arranged to take care of the traffic until that time.

The new bridge is greatly needed.The present structure was never intended to withstand the heavy trafficwhich has been passing over it and signs of weakening have been apparent for some time. To meet increasing traffic the concrete structure will be made so as to accommodate the heaviest motor trucks