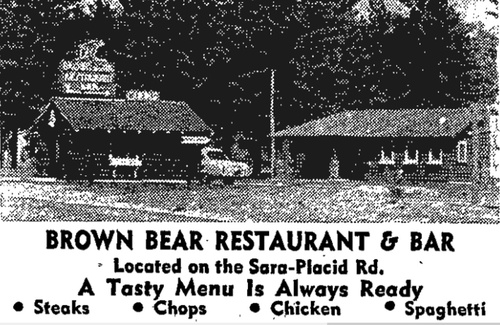 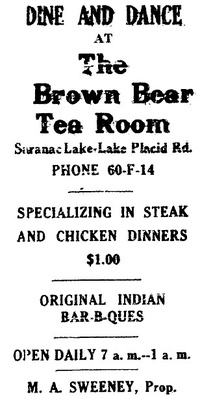 It is not clear whether the business in this advertisement is related to the Brown Bear Restaurant. Lake Placid News, June 9, 1933 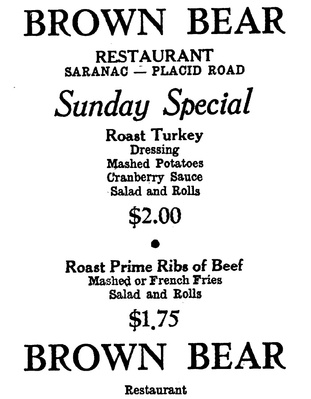 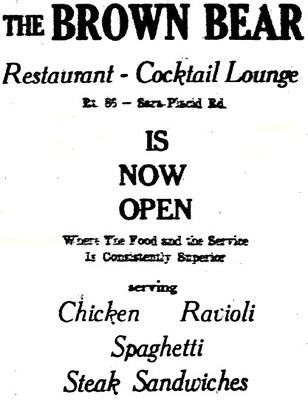 Adirondack Daily Enterprise, April 14, 1959 The Brown Bear Restaurant was located on New York route 86 in Ray Brook, New York, from the early 1930s to the 1960s. In 1947 it was run by Patsy Lario and Bill D'Amico, brakeman on the 1948 Olympic gold-medal Bobsledding team. Later it was operated by bobsledder James Duprey. Patsy Lario operated it from 1952.

A ''sensation" is the word used by patrons to describe the sandwiches and steaks served from the new automatic grill machine recently installed at the popular Brown Bear tea-room on the Saranac Lake-Lake Placid road. This is the only grill of its kind in this section of the Adirondacks, according to M. A. Sweeney, proprietor. Three-minute service on steak and sandwich orders is now the rule at the Brown Bear, it is said. The new machine retains, all the meat juices, and everything cooked on it is done to the proverbial turn. The Brown Bear is proving one of the most popular resorts for dining and dancing with members of the summer colony. 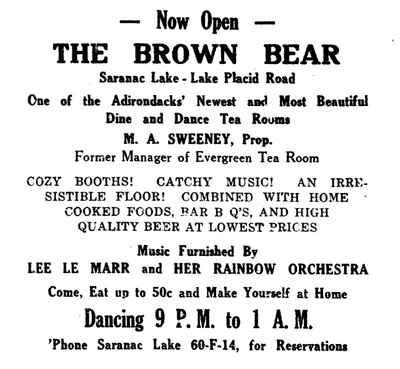 Lake Placid News, April 28, 1933A former Malone resident and a former Saranac Lake man have been listed as having been killed in action and another Franklin county resident is listed as missing in this week's War Department releases. Private Jack Porter was killed in France last month. He was a son of Mr. and Mrs. Leon Porter, former operators of the Brown Bear restaurant and the Overlook hotel at Ray Brook. They now reside in Jacksonville, Fla. Prior to entering the service Porter was employed by the Western Union Telegraph Co. at Saranac Lake.

Mr. and Mrs. William D. Sweeney of Troy are making their home at 17 St. Bernard Street. They are the parents of Mrs. Eugene Keough and will be remembered as the managers in the year 1930 to 1933 of the Evergreen Tea Room in Ray Brook and in 1933 to 1934 managers of the Brown Bear restaurant.