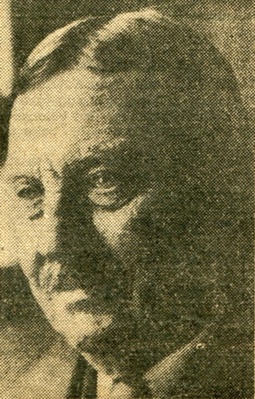 Charles Middlebrook Palmer was a newspaper broker from St. Louis. He was business manager of the San Francisco Examiner, and part owner of the St. Joseph [Missouri] Gazette, the first of many.

E.K. Goldthwaite wrote that, around 1900, "the late Charles M. Palmer thought $50,000 was "too high" for the New York Times. . . . Mr. Palmer, who lived for many years on Park Avenue in the village, owned a daily in St. Joseph, Mo., was senior partner in a newspaper brokerage firm in New York City, and served as mechanical consultant to the Hearst newspapers. He was a director of the Adirondack Bank and, next to Phelps Smith, was probably father's most important friend." (See E.K. Goldthwaite for complete story.)

Excerpted from a piece by Phil Gallos in the Adirondack Enterprise, November 18, 1982. See Hall Cottage

The Palmers were very rich and not a little eccentric. Also, one of their two sons, Carl, was very ill with tuberculosis. They bought a mansion at 135 Park Avenue so that they could all live in Saranac Lake while Carl took the cure.

The Palmers had cats. The cats slept in bunk-beds in a room with mouse-patterned wallpaper. They slept on pure silk sheets. During their mealtime, the cats would sit on high chairs. Linen napkins were held neatly in napkin rings.

C. M. Palmer, an outstanding figure in the newspaper brokerage business, was feted today on his eightieth birthday.

A resident here intermittently for more than 20 years, Mr. Palmer tonight will entertain, his many friends in this village and throughout the state and nation at a buffet supper at his home, 157 Park avenue.

This is the second joyous anniversary Mr. Palmer has celebrated within the past week. On Monday he and Mrs. Palmer observed their fifty-fifth wedding anniversary, informally entertaining a few intimate friends.

Five years ago on the occasion of their Golden Wedding anniversary the Palmers were hosts at one of the most brilliant social functions in the history of the village. Scores of internationally famous figures either greeted them here or telegraphed or cabled their congratulations.

Today Mr. Palmer, who is senior partner in the firm of Palmer, Suter and Palmer, formerly Palmer, DeWitt and Palmer, is again receiving the felicitations of his many friends in the newspaper, political and social worlds.

With him on this happy anniversary are his son and daughter-in-law, Mr. and Mrs. Carl S. Palmer, who reside here; his son, Dean Palmer, who is a junior member of his firm; L. T. Golding, of Brookline, Mass., an early partner of Mr. Palmer's and Mrs. Golding; Mr. and Mrs. George M. Rogers of New York, long-time friends and business acquaintances; and Mrs. Marjorie Sill Wickware.

Robert "Bob" Davis, well known columnist and frequent visitor at the Palmer home, could not be present tonight but will be here within the next two weeks to congratulate his friends of so many years.

Funeral services for Charles M. Palmer, veteran newspaper publisher and broker, were held at Saranac Lake Tuesday at the church of St. Luke the Beloved Physician.

Interment was at St. John's in the Wilderness cemetery at nearby Paul Smiths. Mr. Palmer, 93 and one of the oldest members of the Associated Press, was owner of the St Joseph, Mo., News-Press and Gazette. He died Saturday after a two months illness. His daughter-in-law, Mrs. Charles Sill Palmer said he died of pneumonia.