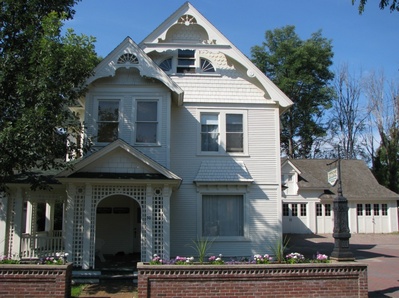 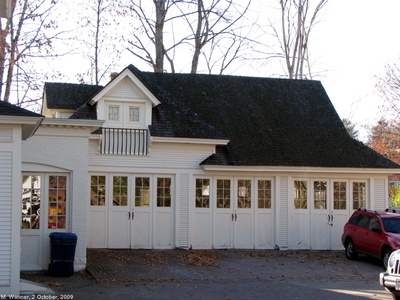 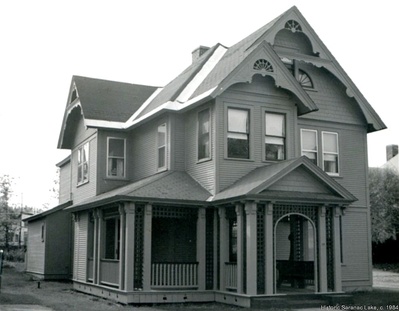 William Callanan, on March 20,1894, bought a lot from Orlando Blood. It is this piece that the house sits on. On December 15 that same year he also bought land from Marcia Hayes. This piece is now the backyard. On April 19,1895, he bought a lot from Frederick A. Isham which is now where the brick carriage house and most of the wooden carriage house stands. This also includes the wide driveway in front. The last two smaller pieces were bought on March 20, 1901, from William Coulter and on October 22,1903, from Annie P. Allen. One of these pieces was used to extend the wooden carriage house.

On December 24, 1937 William Callanan gave his house to his son Andrew W. Callanan and now married daughter Marie C. Jaquet. She had met her husband Paul F. Jaquet in Saranac Lake. He had come from Switzerland and heard that there was opportunity for his skills as an architect in Saranac Lake. Andrew and Paul studied architecture at the University of Pennsylvania. January 20, 1940 William Callanan died at 19 Academy Street at the age of 85. On September 18, 1944, Marte [sic: Marie?] and Bess W. Callanan (Andrew's widow) as an executrix for Andrew, sold the house to John and Nellie O'Brien. John died the following year and his wife sold the property to Frank and Mildred Baker June 15, 1945. In August, 1950, they mortgaged the house to Philip and Elsie Wolff. In September of the same year the Wolffs sold it to Dr. John and Eleanor Hayes. Part of the property was divided off and became Wolff's florist shop. Dr. John N. Hayes was a doctor who specialized in treating tuberculosis and had his office at 19 Academy Street. On January 17, 1967, the Hayes sold the property to Dr. Walter Taylor, dentist. From 1967 to 1989 Dr. Taylor had a thriving practice at this house. He retired in 1989 due to health reasons and the house was sold.

The house was sold to Leslie Hoffman and her then husband Randall Fisher. The house was then completely renovated.

Many elements are of the Eastlake style, rather rare in Saranac Lake. There is a whimsical series of ventilation holes in the form of cats, on the veranda skirt, and a small cure porch above the portico.

The garages once housed two horses and a cow, along with carriages. [Testimony of Agnes Johnson]