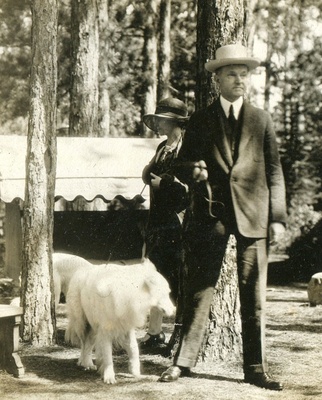 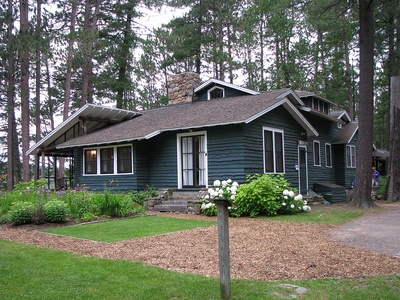 The Owners Cottage - Occupied by President and Mrs. Coolidge in 1926 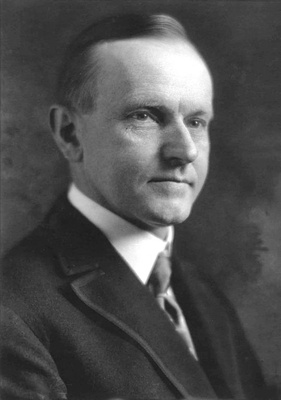 John Calvin Coolidge, Jr. was the 30th President of the United States, serving from 1923 to 1929. Born on the Fourth of July in Plymouth Notch, Vermont, he graduated from Amherst College, and became a lawyer in Northampton, Massachusetts. He entered Massachusetts state politics, eventually becoming governor of that state. His actions during the Boston Police Strike of 1919 thrust him into the national spotlight. Soon after, he was elected as the 29th Vice President in 1920 and succeeded to the Presidency upon the sudden death of Warren G. Harding in 1923. Elected in his own right in 1924, he gained a reputation as a small-government conservative, and also as a man who said very little. He refused the nomination for the presidency in 1927.

White Pine Camp, an Adirondack Great Camp on Osgood Pond near Paul Smiths served as Coolidge's Summer White House from July 7 through September 18, 1926. While there, the President and First Lady attended the First Presbyterian Church of Saranac Lake. 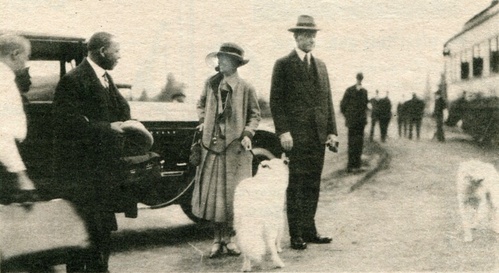 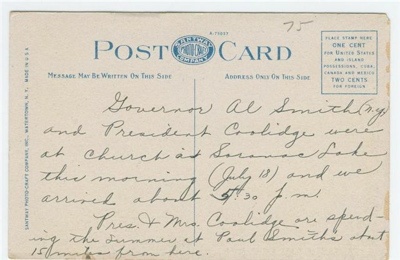 Sixty one years ago this month President Calvin Coolidge was a frequent visitor in Saranac Lake while attending services at the Presbyterian Church each Sunday.

A huge crowd would gather outside the church to catch a glimpse of the President as he entered or left the building. Inside it might be safe to assume that Rev. Newell's sermons fell upon ears that hadn't packed the pews for sometime. In any event the church was filled to overflowing whenever it was known that Mr. and Mrs. Coolidge would be in attendance and our village basked in the limelight of the news media for slightly over two months

All of the excitement took place because the President had chosen White Pine Camp on Osgood Pond to be the site of his summer White House. Located two miles north of Paul Smith's Hotel the camp was owned by Irvin Kirkwood, wealthy publisher of the Kansas City Star newspaper, who had turned over the premises to the Presidential party for the entire summer. At 8:58 a.m. On July 7th, the Presidential train arrived at the Gabriels station and Mr. and Mrs. Coolidge stepped down with two pure-white collies named Rob Roy and Miss Prudence Prim.

Autos were waiting to take the guests along a picturesque road for the final five miles of the trip from Washington, D.C. At the camp gate the President was saluted by a contingent of 53 U.S. Marines who were to stand guard during his stay in the Adirondacks. At nearby Paul Smith's Hotel Phelps Smith, eldest son of the late and legendary Paul, had a cottage on the grounds equipped with wire and telephone service so that Coolidge could keep in touch with Washington. The President was pleased to learn that Paul Smith, like himself, was a native of Vermont, and he told Phelps that he intended to study some local history while at White Pine Camp.

Calvin Coolidge was an avid fisherman and he planned to take full advantage of the opportunities at his doorstep. Both bass and pike were available in Osgood Pond, and he enjoyed a standing invitation from William Rockefeller to fish the trout streams coursing his private park at nearby Bay Pond. Wading was the President's favorite way to pursue the speckled trout and the brooks of Bay Pond Park were noted for these beauties. Orman Doty of Rainbow Lake and Oscar Otis, who was Kirkwood's caretaker, served as guides on the fishing expeditions. The two local men agreed that Coolidge was not only a good fisherman but a kind and considerate companion as well.

Quite naturally the fishing had to be constantly interrupted by national affairs. There was a steady stream of politicians, business leaders, and private interest groups clamoring for an audience with the President in addition to the normal affairs of state associated with running the government from his Adirondack outpost.

On July 16th Governor Al Smith arrived to greet the President and present him with a free fishing license. In turn Coolidge invited Smith to a trout dinner the main entree being 20 pounds of freshly caught fish by virtue of his own angling. Although otherwise extremely cordial Calvin refused to be photographed with the Governor. It had been widely rumored that Smith would run against Coolidge in the 1928 presidential election. This face off never took place since Coolidge stated "I do not choose to run."

While in office, Coolidge supported prohibition but there existed on the camp premises a cottage which had known better times. Cabin No. 15 featured a bar, a brass rail, but no liquor. Many years earlier the original owner of the camp, Archibald White, and another president Grover Cleveland, would retire to No. 15, after fishing, for a friendly glass or two while comparing fish stories. On his daily walks around the grounds Coolidge would pass by the cabin without the slightest hint of any interest.

On August 13th Secretary Herbert Hoover arrived to brief the President on his farm-aid plan. It is unknown whether or not the two men discussed the up-coming election possibilities for 1928. If any exchange did take place they kept any such talk strictly to themselves. Keeping silent on matter was nothing new for "Silent Cal."

While at dinner a verbose female guest blurted out "Mr. President I just made a bet with my husband that I could get you to say more than three words." "You lose," replied Coolidge.

Another favorite story concerning his taciturn manner was related by his successor to the office of Governor of Massachusetts. The current Governor said "Calvin how is it that when you were Governor you always managed to be home by 5 p.m.? I'm sure you had as many callers as I have and yet I can never leave the office before 9 p.m." "You talk back." said the President.

Coolidge also knew how to dodge an up-coming unpleasant situation. During that same summer he was being pressured by certain church groups to ban the proposed Dempsey-Tunney prize fight. The president adroitly passed the ball to his secretarial team. He appointed a committee of Secretary of State Kellogg and Secretary of Commerce Hoover to investigate the matter. The bout was held in Philadelphia on Sept. 23rd.

Reluctant to leave his pleasant surroundings at White Pine Camp the President still felt obligated to journey to two nearby areas of national interest. On Aug. 26th he motored the 65 miles to Plattsburgh to review the 1,600 members of the citizen's military training camp regiment stationed with the U.S. Army 26th Infantry at Pittsburgh Barracks.

After the parade Coolidge inspected the camp's mess hall. On his trip to Plattsburgh the President went by way of Bloomingdale, Vermontville, Riverview, Cadyville, and points east. On his return trip he travelled through AuSable Forks, Wilmington, and Lake Placid. The residents along both routes turned out to welcome the President with cheers and flag waving.

Early in September President Coolidge made the 30 mile trip to Tupper Lake where an official visit to the U.S. Veterans' Bureau Hospital was on the agenda. During his tour of inspection he expressed the nation's concern for their well being and tendered a message of gratitude to those suffering in the institution after a service of great value to our country.

On Sept. 17th the President's family and party broke camp to return to Washington, D.C.

Four years after Coolidge had left Paul Smiths -the hotel burned to the ground on Sept. 5th, 1930, and seven years late Phelps Smith, who had been the President's host in 1926, passed away. Phelps was the final member of the Smith dynasty and, with no heir apparent, a considerable fortune awaited the reading of a will which eventually created Paul Smith's College in memory of his famous father. Co-incidentally, in 1948, the owners of White Pine Camp donated the property to the college and the former summer White House became a student dorm. After serving in this capacity for several years the college board decided that White Pine was in fact a white elephant. Because of its being two miles distant from the main campus it presented a transportation problem and in 1983 the complex was sold.