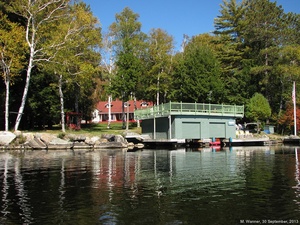 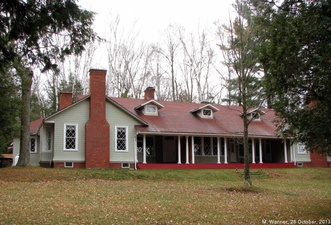 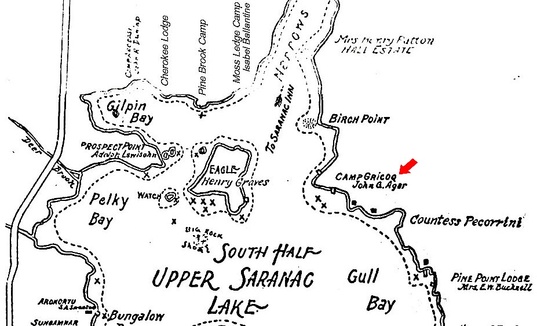 Camp Gricoq was the camp of lawyer John G. Agar on Gull Point on the eastern shore of Upper Saranac Lake opposite Camp Eagle Island.  The point was later subdivided.

John Agar and his wife, Agnes, bought the 106-acre property on December 2, 1896.  At the time, the property could be only be reached by water, and the Agars rented a garage and dock in Gilpin Bay, a mile west of the camp.  A road, the precursor to the later Bartlett Carry Road was built through the lands of the Bucknell Camps in 1953 to allow lumber to be harvested on the point and north along the Narrows to Pork Bay.

When the estate was offered for sale about 1940, a brochure mentioned the water-only access as an asset that assured privacy; it noted that a garage could be rented in Gilpin Bay for $30 per month.  It listed the following buildings:

The Boat House, containing an engine room used to power the pump, slips for two rowboats, a small laundry, a chauffeur's bedroom with bath, three master bedrooms with two baths, and a small balcony overlooking the lake.

The Servant's House, connected to the kitchen of the Main House by a covered walkway, containing five servant's rooms, servant's sitting room with fireplace, and a porch.

A Launch House, with slips for three powerboats, and a sitting room above with two balconies.

The Guides' House, with a kitchen, living room, four bedrooms bath and porch.  It was located half a mile from the main house, and could be reached by a private telephone line.  A well, ice house, woodshed, and cow barn were located near by.

A Bath House, with three divisions, on a sandy bay.

An ice house, storage building, and a tent platform for two large tent bedrooms, tennis court and well.  All dwellings but the guides' house had electric service provided by Paul Smiths Electric Company, and the main house and guides' house had long-distance telephone service.