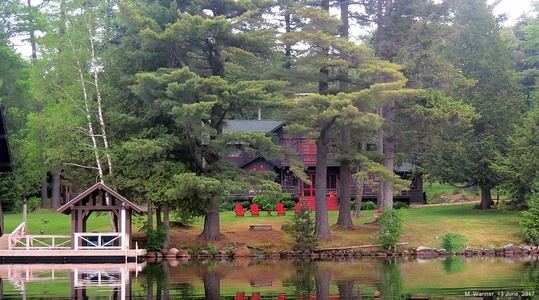 Camp Pinebrook is a Swiss chalet style great camp designed by William L. Coulter on Gilpin Bay on the west side of Upper Saranac Lake. It was built for former U.S. Vice President Levi P. Morton in 1898 on the site of an older camp, on land that had belonged to William West Durant. It is similar in style to nearby Moss Ledge, another Coulter design. 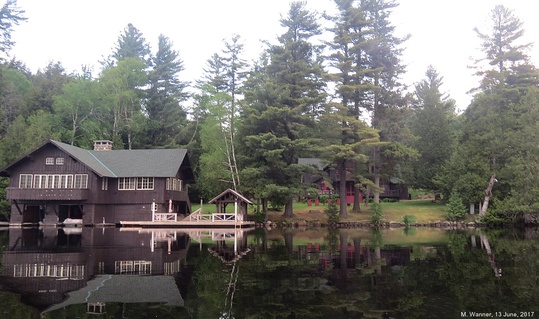 The boathouse at Camp PinebrookWhen built, the camp could only be reached by water; the road that would become New York Route 30 did not extend to Saranac Inn until 1909.

Morton sold Pinebrook to Mitchell Levy in 1903 and subsequently built Camp Eagle Island nearby. Pinebrook burned to the ground in 1911 but was rebuilt by Herman S. Rosenbaum, who also built the road out to the state highway.

The camp was bought by James Laughlin III of Jones Laughlin Steel Co. in 1931, and three years later it was acquired by Carl Loeb. The Loebs gave the camp to Syracuse University in 1948 along with Moss Ledge. After many years as a conference center, it was sold in 1972 and is again a private camp.

The Howell camp on the Upper Saranac Lake, which was purchased two years ago by ex-Gov. Levi P. Morton, and which he has named “Pine Knot Camp,” [sic] has undergone many changes, and is now one of the prettiest summer places on the lake. It is located on Gilpin Bay, and contains about twenty-five acres of land. It is a series of low, one-story buildings picturesquely arranged near the shore, and has several very unique shingle buildings finished simply on the inside, the beams having the bark left on. Each of these buildings has a large stone fireplace, and the furniture is made in rustle style from the unfinished product of the woods. The camp has five or six large tents, in addition to the buildings, including a launch-house and a separate boat-house. Perhaps the most unique feature of this camp is its large living room, with open rafters and abundance of window space.

...Another of the beautiful camps but recently completed is that belonging to ex-Governor Levi P. Morton. It is situated on Gilpin bay in upper Saranac lake, and contains about 25 acres of land. It is a series of low, one-story buildings, picturesquely arranged near the shore of the lake, and has several unique shingle buildings finished simply on the inside, the beams having the bark left on... 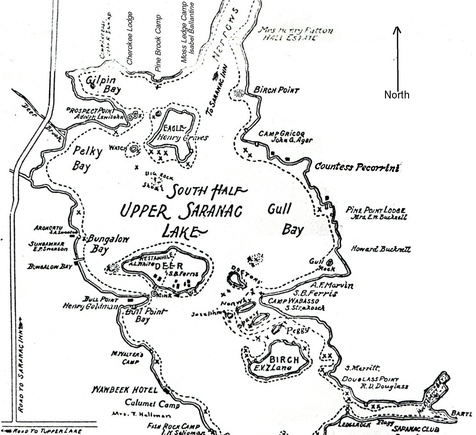 ...Mr. and Mrs. Percy Rivington Pyne of New York are expected at the camp formerly occupied by the Mortons on the Upper Saranac Lake on Aug. 1.

On Saturday evening, Sept. 1, at 8:30 a program of popular and semi-classical music will be presented in Loeb Lodge at Pinebrook Camp, Syracuse University cultural and conference center on Upper Saranac Lake. Participating will be Mrs. Elisabeth Mulfinger, pianist, wife of Professor George Mulfinger, who will assist as cellist; Joan Mulfinger. violinist, and David Mulfinger. pianist.