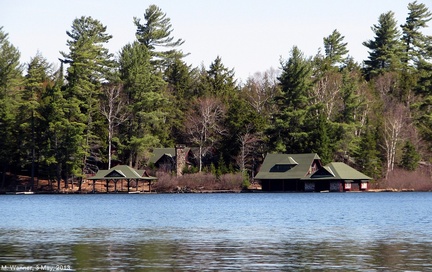 In the 1930s the camp was bought by Gail Gardner and Ruth Dewling who operated a dance and performing arts center on the site, employing dancers and musicians from new York City as instructors.

Camp Regis-Applejack, a Quaker summer camp for children, opened in 1946 by Earl and Pauline Humes is actually two camps at one site: Camp Regis is for boys and girls ages 6 through 12, and Camp Applejack is for boys and girls ages 13 through 16. The camp was  and is operated by the Humes family; Michael E. Humes is the owner and director.  The Humes moved two buildings from the nearby Civilian Conservation Corps camp at Barnum Pond to the camp, and added several other buildings over the years.

Society articles in The New York Times reported on the comings and goings of the millionaires' colony that had grown up around Paul Smith's Hotel, including the arrival each summer of William; his brother, Edmund; and sister, Josephine. Activities centered around hosted dinners, baseball games at Paul Smiths, water polo, sailing and powerboat races, and the annual fundraiser for the Trudeau Sanitarium. The New York Times noted that Edmund was president of the St. Regis Golf Club, and it reported on William's salmon-fishing expedition in Canada.

"A camp is a community and it is valuable for all members of that community to have the experience and stimulation of meeting people of different backgrounds," commented Mrs. Humes, for whom 12 is "tokenism," but all they can afford.

Mrs. Humes would also like to enroll more minority group children who can afford to pay.

"I think it's important that they shouldn't all come from deprived backgrounds because that tends to set up in the minds of the children from suburbia a stereotype that isn't at all true," she explained...