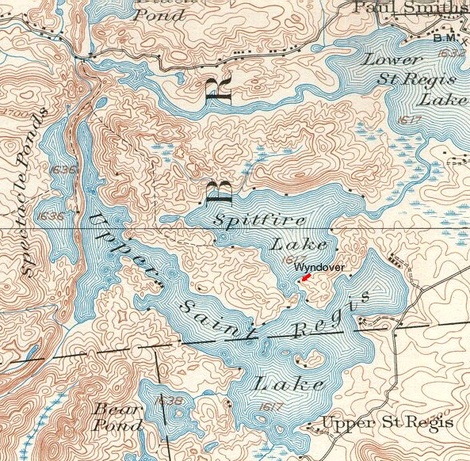 Other names: McAlpin Camp; Trevor Camp  (May be confused with Wyndover, a cottage in Saranac Lake.)

Camp Wyndover, also known as the McAlpin Camp, is a fourteen-acre camp on the east side of the passage between Upper St. Regis Lake and Spitfire Lake.  William W. McAlpin purchased at least part of the property from Dr. E. L. Trudeau. Trudeau's Rabbit Island is a part of this camp. Ben Muncil built camp buildings here for the McAlpins. Later John B. Trevor and his descendants owned it. In 1938, the trustees of the not-yet-formed Paul Smiths College met there to discuss future plans.

Edward M. Oshier, Phillip Swinyer, David Sweet and Ives Turner were caretakers at the camp. So was John M. Samburgh who was employed by the Trevor family at Wyndover for 34 years.

…Lewis H. Thompson of Red Bank, N. J., gave a dinner and dance at Camp Wyndover on Spitfire Lake on Saturday evening. Unique invitations were sent out and the evening was a delightful one.

Paul Smith celebrated his eighty-sixth birthday anniversary, a week ago, Sunday, when he was dined and feted by the large colony of summer visitors at his hotel...

Sunday, Mr. and Mrs. Paul Smith, Jr., gave a dinner at Kamp Kamambi in honor of Mr. Smith's birthday. Present were Dr. and Mrs. Edward L. Trudeau, who have been visitors at Paul Smiths for upward of thirty years, Mr. and Mrs. William W. McAlpin, of Camp Wyndover, and Mrs. Andrew White, of Syracuse, a guest of Mrs. Smith.

From a letter to the editor by Dan MacMasters:

…In 1933 and 1934 I worked in the summer as a chore boy at the McAlpine [sic] camp on the slough between Upper St. Regis and Spitfire lakes. Ives Turner was the caretaker. After the summer season ended and the camp was closed, I stayed on with him to help in his trapping. He then had a trap line some 200 miles in length. I'd have worked for nothing but he actually paid me— a dollar a day for my room and board, and a dollar for every mink we got.

The first winter I read Spinoza and Boswell's Johnson. The second I learned French from an old grammar the summer people left behind. And in the long evenings I also read The Enterprise, though it didn't take long. It was a sorry thing, a scant sampling of world events and a dreary succession of personal notes. It neither pleaded nor prodded, accused or amused. Maybe I'm too harsh. Maybe it was better than I remember. But I honestly can't recall a single story from those years, and they were stirring times. The depression had finally hit Saranac, a couple of years after it paralyzed the rest of America, and caused a vast unease.

The next four years I spent in college and worked summertimes at Saranac Inn, on the newsstand There I developed a taste for Havana cigars (that I never since could indulge) and could read omnivorously in the newspapers of the day. We got the best of them, including such now-defunct oracles as the Boston Post, New York Sun and Brooklyn Daily Eagle. We also handled a few Post-Standards and Watertown Times. But we never sold the Enterprise...

DAVID SWEET WANDERS AWAY AND FALLS INTO ST. REGIS LAKE — FOUND BY HIS FATHER

The people in the neighborhood of the McAJpin Camp, Upper St. Regis Lake have been aroused to the deep sympathy over the drowning of three year old David Sweet, son of David Sweet of Keeses Mill on Wednesday, July 8th.

Little David was in the habit of playing out of doors along the lake but never out of sight of his father, who is a guide, connected with the McAlpin Camp. He was a bright little fellow and endeared to everyone who had ever met him. The guests found much pleasure in romping and playing about with him; his youthful personality being such that his friendship could not be denied.

On this particular day, which brought forth a sad ending, for relatives and friends, David wandered away from the camp, and was undoubtedly playing on the dock, when he lost his footing and fell into the deep waters never to see father or mother again.

His father, upon discovering his absence and not finding him in the nearby vicinity, became worried, and lead a party on a search through the woods and along the bank of the lake.  But nothing of the lost boy could be seen.  The search, spurred on by the anxiety of the father and friends, finally disclosed the body of the child, dead, on the surface of the lake, just off the dock.

The scene which followed was a pitiful one indeed, and there were very few present that were not moved to tears.