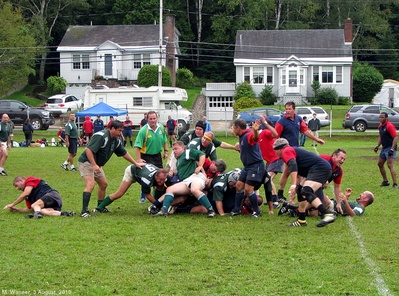 The Canadian-American Rugby Tournament was created in 1974 by the Mountaineers Rugby Club of Saranac Lake, New York. The first tournament involved eight teams. It grew rapidly, and now more than 100 teams, making it the largest rugby tournament in the western hemisphere.

The New York city-based Old Blue edged a scrappy Ottawa Irish team 11-7 for the title before a large, noisy and wet group of rugby fans at the soggy Pius Field.

In the consolation final earlier in the day the New York Knickerbockers overcame Schenectady, 18-6.

The action all started on a sunny Saturday morning at 9:30 when the host Saranac Lake Mountaineers were bested by a physical Lynwood, Ontario team 9-4.

Mac Fobare scored for the locals on a long play early in the game when he went in for the try from about 10 yards out. The extra points were missed but the try gave Saranac Lake the lead for a few brief minutes.

Lynwood came right back in the opening minutes of the second half scoring a try and adding the extra points giving them a 6-4 lead. They added a field goal later in the contest to take the 9-4 win and send the Mountaineers into the losers bracket. 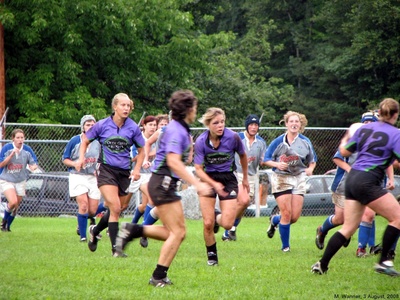 In other first-round action Old Blue eliminated Schenectady 22-8 in one of the better games of the tournament, while Ottawa blanked Troy, 33-0. In the last game the Montreal Irish beat the New York Knickerbockers, the eventual consolation champions.

The Knicks tripped an injury-ridden Mountaineer team, 10-7 to eliminate them from further competition.

The game was a close one until the final minutes with the Mountaineers enjoying a lead from the opening play.

On that opening play the ball went to the Saranac Lake backs and Ken Roberts took it around the right end for the four-point score. The play covered 30 yards. The extra points were missed but the Mountaineers enjoyed a 4-0-halftime lead.

The Knickerbockers came second half and went ahead 6-4 when they converted the extra two points.

Saranac Lake refused to give up and went into the lead again at 7-6 when Sean Morgan put away a field goal attempt from 40 yards out. But the Knickerbockers came through with the needed try late in the game to send them into third round competition.

In the other games on the losers side Schenectady revenged their opening round loss by eliminating Troy from the tournament.

On the winners side Ottawa sent Lynwood to the losers third round action and Old Blue sent the Montreal Irish along.

The Knickerbockers defeated Lynwood and Schenectady disposed of Montreal for the right to play in the consolation championship.

In the championship game Old Blue, renowned for the expertise in the game, had their problems with Ottawa and the game was nip and tuck until the final few minutes when Old Blue scored a try to put it out of reach.

The winners were presented their trophy later in the evening at an awards ceremony at the Dew Drop Inn. Nick Rosetti, the Old Blue kicker and the player who scored the last try for the champions, was named the MVP of the tournament winning the Dagwood's Award.

Both days events were followed by the traditional rugby social gatherings. 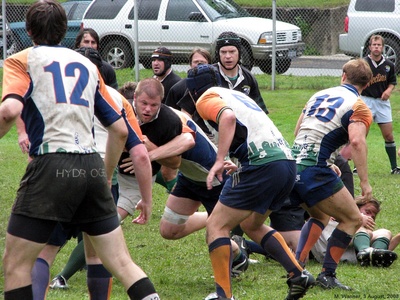 This weekend the Saranac Lake' Can/Am Rugby Tournament is celebrating its 20th year. Today the event is the largest tournament in the Western Hemisphere with over 100 teams from the United States, Canada and a side from France competing.

It hard to believe that the tournament which has become a ecomomic blockbuster for the local community all started with a dare among a few players of the host Saranac Lake Mountaineers after practice one night.

The Can/Am Tournament became a reality in 1974. Jan Plumadore (founder of the Mountaineers and now Franklin County Supreme Court Justice), Kerry Kelly, John Morgan and other members of the club thought it would be a good idea to have a tournament to reward the more established clubs for putting up with the Mountaineers during their first couple of years in existence.

"The tournament was born out of friendships," Plumadore said. "In the first few years of the club's existence we played the more established clubs. We only had three players that head seen a rugby game and with inexperienced players a number of dangerous things can happen."

The first tournament had eight teams and it was played the same time it is now — the first weekend in August. The time of the tournament was chosen because it was basically the end of the spring and summer seasons but prior to the beginning of the fall season.

"When it started, it was a thank-you," Kelly said. "We had two tough seasons. We had problems getting fields and we had to travel a lot. It was tough to find a team that would play you. To thank the teams that had put up with us we decided to have a little tournament. We live in a nice area and we thought the teams would like to come. We didn't think in our wildest dreams it would get this big."

According to Plumadore, everyone had such a good time that it was decided to do it again the following year. This time 16 teams competed. In 1976, 24 teams participated, men in 1977 it expanded to 32 teams. 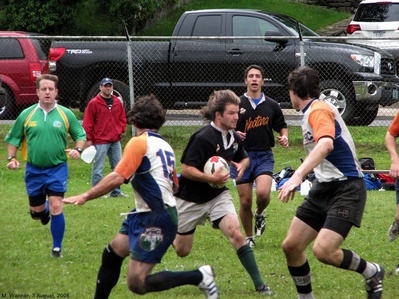 The tournament did have its growing pains, which included field problems. The problems ranged from not having enough fields to the condition of the fields after the tournament. According to Kelly, the school board voted in 1978 not to allow the club to use the fields. However, Kelly went to the board meeting to ask that me matter be reconsidered. Several members of the business community commented that the weekend was one of their biggest weekends of the year, and asked the school board not to make it impossible for the tournament to continue. The board reversed its decision.

Kelly, Plumadore, Morgan and the current tournament organizers feel that die the event wouldn't be nearly as big if it wasn't for me work of John Raymond, the athletic director for Saranac Lake school sports.

"He is behind the scene," Kelly said, "but he has people up there picking up the fields and doing other work. He does a super job."

Kelly also stated that it took a few years to weed out the bad teams that trashed motels and were responsible for some problems in town. "It's turned into a very respectable tournament," he said.

"The people in the community started to accept me tournament Saranac Lake has always been known for putting on different events, like boating, criteriums and other events, and rugby just fit in. The whole community really gets behind it. They back it. It has been great."

Kelly served as tournament chairman for a number of years. He also has a very impressive statistic as he never missed a game in eight years.

The tournament would get its biggest boost during me early 1980s when Morgan was able to land the U.S. Eagles (select American side) to play against the Canada National Side in a test match during the Can/Ams.

Behind the work of Morgan and other tournament members the event has grown to its current size. Morgan was able to bring in major sponsors. Today Bud Light is the major sponsor.

The tournament has also featured its share of sportsmanship. One of the best teams that exemplified that characteristic was the Knicks. In 1977, the Knicks were playing Providence at the Pius X field.

"It was late in the day and the field was extremely muddy," Plumadore, who was refereeing the game, said. "Providence had a back named Mullins that dropped-kicked that ball nearly 50 yards. I couldn't tell if the ball went through the uprights, but Blair McFarlin of the Knicks was back near the uprights and saw the ball go through and signaled it good. The Knicks initiated the applause."

The Knicks, in the finals one year, volunteered to switch jerseys because theirs were too close to their opponents' color. They switched with the Providence team.

Throughout its history, there have been numerous great individual performances, but one player who stands out is Jim Carr. He won the Most Valuable Player award while playing for the Ottawa Irish in the late 70s and last year won the award while playing for the Louisiana Exiles in the Over-35 division. In 1976, he scored 24 points in one game. He is the only male player in tournament history to win two MVP awards.

Amy Westerman of Beantown has won the MVP award the past two years in the women's division.

The first sign that the tournament had a big economic impact on the commuinty was in the second season of the event.

Plumadore stated, that according to the Technical Assistance Center in Plattsburgh, the tournament is the biggest weekend (moneywise) of the year in the local area.

Kelly stated that the sales tax revenue that is generated is enormous during the weekend. 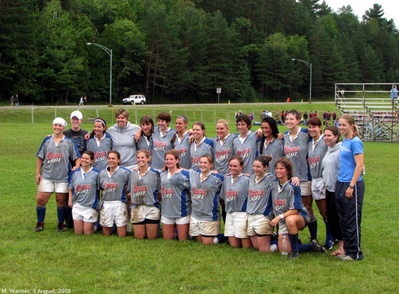 Plumadore, Kelly and current Tournament Treasurer Chuck Simpson asserted that the majority of the money spent is new and it is; coming in from people outside the area The money that is spent may turnover anywhere from four to, seven times. Officials have estimated that money generated during the area's other big weekend, Winter Carnival, is more locally generated.

"The economic impact has now spilled over into Lake Placid," Kelly added.

In 20 years of rugby a lot of long-lasting friendships have been made.

"The tournament has a longlasting effect," Kelly said. "Everywhere you went to play rugby people talked about the tournament"

In his current position at the American Management Association, Kelly commented, he is required to talk to a lot of salesmen. "I talk to salesmen from all over the country and it is suprising the frequency that a salesman will tell me he knows where Saranac Lake is because he has played in the tournament."

"Rugby is a unique sport," Plumadore commented. "It gives you a different perspective on sports in general because of its social aspect. Other than the 19th hole in golf and the after-game social in softball, most sports don't have strong social aspects. Rugby is different than both golf and softball because of the physical aspect.

"A social aspect is sadly lacking in most American sports. Teams should get together more. Through osmosis, if rugby can help do that, then it has made a significant mark."

According to the current tournament organizers, they don't forsee the tournament getting any bigger in size in the next few years.

"I don't think the tournament will get any bigger," said Tournament Director Ron Wuesterfeld. "We just don't have the field space and we don't want to extend it out to any other areas because of expenses, medical and other reasons."

Wuesterfeld stated that he would like to attract more teams from the West "It would be nice to make this the Super Bowl of Rugby."

"The quality of the level of the teams has gone up," Mountaineer President John Muldowney said. "We want to continue to attract these teams and others like them."

Wuesterfeld also stated that his duties as the director have changed a lot since he took over in 1987.

"Before I took over it was basically a one-man show. Now the duties of running the tournament are pretty well delegated. It is becoming more defined and more sophisicated. You need a lot of people to run it properly," Wuesterfeld commented.

"The club should take pride in it," Plumadore said. "It's very pleasing to see the younger people bringing it to another level."