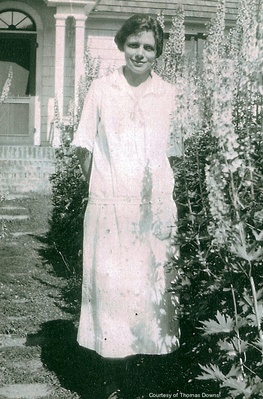 LeRoy and Carabel both grew up in Meriden, Connecticut. She was about a year older than he and I think they were something of an item by the end of high school. They were courting during Roy's days as a Yale undergraduate, and my mother always claimed that asking about the time in the apple orchard could cause Carabel to blush as long as she lived. I know that they were married in 1915 after Roy graduated from Yale Medical School.

When the war started in 1917, he was commissioned in the Army Medical Corps and was stationed briefly at Fort Devon in Massachusetts. While there he broke down with TB, was discharged and went to Saranac Lake to cure. She followed him at some point but I am not exactly sure when. I do know that my mother was born in Saranac Lake in April 1919 joining a two year old sister. The whole period must have been stressful for Carabel; in addition to everything else, her favorite brother, Tommy, was killed in action on November 9, two days before the armistice.

As a native New Englander, she considered everything west of the Hudson to be pretty much Indian territory, but she did come to love the Adirondacks and lived in Saranac Lake at least partial years until her death at 85.